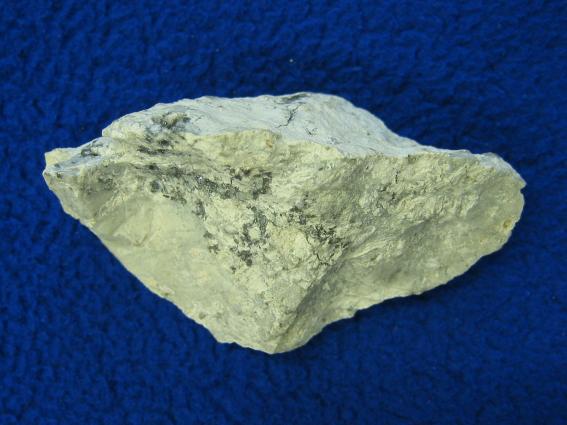 Molybdenum is a refractory metallic element used principally as an alloying agent in cast iron, steel, and superalloys to enhance hardenability, strength, toughness, and wear and corrosion resistance. In the United States, molybdenum is mined and produced as a byproduct. The United States is the world's largest producer of molybdenum. Source: http://resourcescommittee.house.gov/subcommittees/emr/usgsweb/ 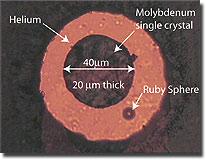 A photomicrograph of an actual experiment at pressure.

LIVERMORE, Calif. – For the first time, a group of Livermore researchers have been able to pin down the high-pressure lattice dynamics of the transition metal molybdenum by mapping its phonon energies under extremely high pressure.

Measuring the phonon dispersion curves is key to understanding a range of properties such as sound velocities, elasticity and phase stability.

Molybdenum, which in small quantities is effective at hardening steel, is used in two-thirds of all alloys. It is used industrially in high-strength alloys and high-temperatures steels, partly because it has one of the highest melting points of all pure elements. The metal also is used in some electronic applications, as the conductive metal layers in thin-film transistors. However, the element also is interesting because it undergoes no structural transitions under extremely high pressures, thus, allowing researchers to study the effects of pressure to very high compressions.

Using the inelastic X-ray scattering beamline at the European Synchrotron Radiation Facility (ESRF) and theoretical calculations, researchers at Lawrence Livermore National Laboratory tracked the pressure evolution of a dynamical anomaly within molybdenum that has plagued scientists for years.

The team, made up of LLNL geophysicists Daniel Farber, Daniele Antonangeli, Florent Occelli and theoretical physicist Daniel Orlikowski, as well as researchers from ESRF (Michael Krish) and Universite Paris (James Badro), placed single crystals of molybdenum (40 microns in diameter by 20 microns thick) into diamond anvil cells and took them to pressures as high as 40 GPa (400,000 atmospheres) to observe the evolution of the anomaly. While the samples were at pressure, they measured the lattice dynamics using an advanced X-ray scattering method that can measure shifts in phonon energies at very small levels.

Lattice dynamics are the collective motions of the atoms within a crystal. These motions are analogous to the vibrations of a guitar string.

“In essence, we analyze the energy shift of the scattered X-ray photons and see how much the crystal absorbs due to the different collective motions of the atoms within the lattice,” said Farber, lead author on a paper appearing in the March 24 issue of the journal Physical Review Letters .

“We found the anomalous behavior in molybdenum’s phonon energies decreased as we squeezed it more.”

And with the help of LLNL theoretical physicists, Farber said they also have a sense of why it happens.

“Theoretical codes developed at the Laboratory came to bear on this new high pressure data set of the lattice dynamics in molybdenum and it was the powerful combination of precise experimental data and the theory that was able to help us pin down the underlying physics,” he said. “The theoretical calculations suggested there is a coupling between electronic states and the phonons. The coupling significantly decreases as you compress the lattice and molybdenum becomes a much more ‘normal’ metal.”

Farber said future research is aimed at using samples as small as 20 microns in diameter and 10 microns thick to pressures in the 100 GPa range and probing them at conditions of simultaneous high pressures and high temperatures.