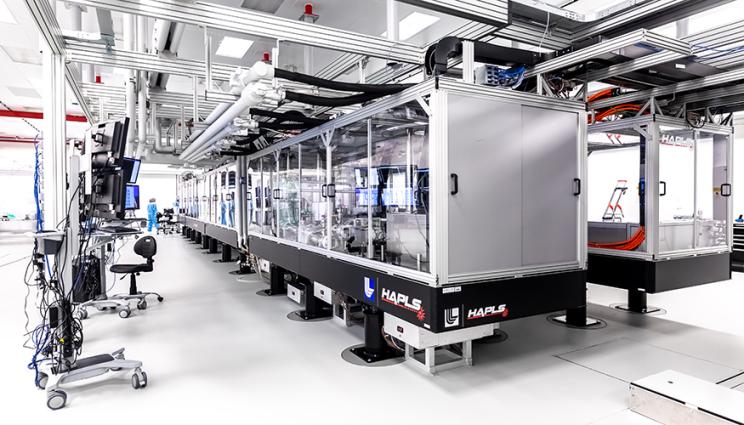 Lawrence Livermore National Laboratory (LLNL) researchers have designed a compact multi-petawatt laser that uses plasma transmission gratings to overcome the power limitations of conventional solid-state optical gratings. The design could enable construction of an ultrafast laser up to 1,000 times more powerful than existing lasers of the same size.

Petawatt (quadrillion-watt) lasers rely on diffraction gratings for chirped-pulse amplification (CPA), a technique for stretching, amplifying and then compressing a high-energy laser pulse to avoid damaging optical components. CPA, which won a Nobel Prize in physics in 2018, is at the heart of the National Ignition Facility’s Advanced Radiographic Capability as well as NIF’s predecessor, the Nova Laser, the world’s first petawatt laser.

“Glass focusing optics for powerful lasers must be large to avoid damage,” Edwards said. “The laser energy is spread out to keep local intensity low. Because the plasma resists optical damage better than a piece of glass, for example, we can imagine building a laser that produces hundreds or thousands of times as much power as a current system without making that system bigger.”

LLNL, with 50 years of experience in developing high-energy laser systems, also has been a longtime leader in the design and fabrication of the world’s largest diffraction gratings, such as the gold gratings used to produce 500-joule petawatt pulses on the Nova laser in the 1990s. Still larger gratings, however, would be required for next-generation multi-petawatt and exawatt (1,000-petawatt) lasers to overcome the limits on maximum fluence (energy density) imposed by conventional solid optics (see “Holographic Plasma Lenses for Ultra-High-Power Lasers”).

Edwards noted that optics made of plasma, a mixture of ions and free electrons, are “well suited to a relatively high-repetition-rate, high-average-power laser.” The new design could, for example, make it possible to field a laser system similar in size to the L3 HAPLS (High-Repetition-Rate Advanced Petawatt Laser System) at ELI Beamlines in the Czech Republic, but with 100 times the peak power.

Designed and constructed by LLNL and delivered to ELI Beamlines in 2017, HAPLS was designed to produce 30 joules of energy in a 30-femtosecond (quadrillionth of a second) pulse duration, which is equal to a petawatt, and do so at 10 Hertz (10 pulses per second).

“If you imagine trying to build HAPLS with 100 times the peak power at the same repetition rate, that is the sort of system where this would be most suitable,” said Edwards, now an assistant professor of mechanical engineering at Stanford University.

“The grating can be remade at a very high repetition rate, so we think that 10 Hertz operation is possible with this type of design. However, it would not be suitable for a high-average-power continuous-wave laser.”

While plasma optics have been used successfully in plasma mirrors, the researchers said, their use for pulse compression at high power has been limited by the difficulty of creating a sufficiently uniform large plasma and the complexity of nonlinear plasma wave dynamics.

“It has proven difficult to get plasmas to do what you want them to do,” Edwards said. “It's difficult to make them sufficiently homogenous, to get the temperature and density variations to be small enough, and so on.

“We’re aiming for a design where that kind of inhomogeneity is as small a problem as possible for the overall system —the design should be very tolerant to imperfections in the plasma that you use.”

Based on simulations using the particle-in-cell (PIC) code EPOCH, the researchers said, “we expect that this approach is capable of providing a degree of stability not accessible with other plasma-based compression mechanisms, and may prove more feasible to build in practice.” The new design “needs only gas as the initial medium, is robust to variations in plasma conditions, and minimizes the plasma volume to make sufficient uniformity practical.

“By using achievable plasma parameters and avoiding solid-density plasma and solid-state optics, this approach offers a feasible path toward the next generation of high-power laser.”

The research was supported in part by LLNL’s Laboratory Directed Research and Development (LDRD) Program.