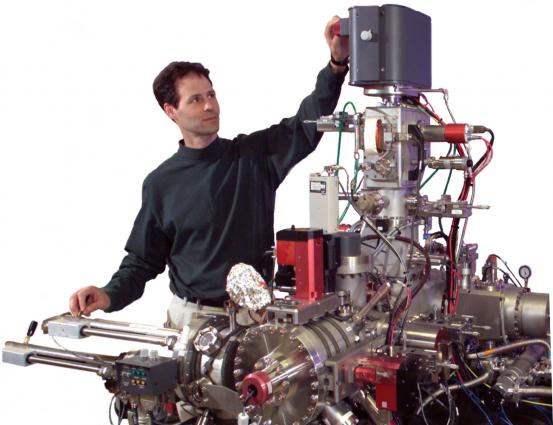 LLNL physicist Peter Weber with the Laboratory’ high-resolution secondary ion mass spectrometer (NanoSIMS), one of only five such instruments in the United States. ( to download a high-resolution image.)

Researchers induced the formation of tiny lipid raft-like gel domains on silicon chips (above). They then used LLNL's high-resolution secondary ion mass spectrometer, the NanoSIMS, to image the samples and detect the gel domains at lateral dimensions as small as 100 nanometers (about 1,000 times smaller than the diameter of a human hair). The gel domains are shown as red in both the schematic and the NanoSIMS ion image (below).

LIVERMORE, Calif. — A team of scientists, including two from Lawrence Livermore National Laboratory, has achieved an important advance in the race to understand what guides and facilitates the functioning of the cell membrane.

Their work, which could assist in better understanding of how viruses interact with cells and in the attribution of bioterrorist acts, is described in this week’s edition of the journal Science .

"It is widely believed that lipids in the cell membrane form compositionally distinct domains, called lipid rafts, that serve a key role in the organization of the cell membrane," said Peter Weber, a physicist in LLNL’s Chemistry, Materials and Life Sciences (CMLS) Directorate and in its Glenn T. Seaborg Institute. "Until now, there has been no way to test directly this hypothesis. We have demonstrated a method that can be used to directly test for the existence of lipid rafts in cellular membranes."

Ian Hutcheon, also a physicist in CMLS and the deputy director at LLNL’s Glenn T. Seaborg Institute, added, "Understanding how cells function is an extremely important goal and this work is one small, but valuable, step."

The cell membrane is composed primarily of a fluid bilayer of lipids. Since the 1970s, it was thought that this lipid bilayer was a passive carrier for the proteins that performed the active work of the cell membrane.

In the new model, which is being tested by the Stanford/LLNL/Davis team, it is now believed that the lipids are responsible for actively organizing the functional proteins of the cell membrane.

"This is a very elegant hypothesis, under which the subtle affinities of certain lipids for each other make the cell membrane self-organizing, but it still is unproven," Weber points out.

The team’s most recent experiment was something of a feasibility study to determine if, and to what degree, it might be possible to see and image lipid rafts in the membranes of cells.

In their experiment, the research team formed model cell membranes on silicon chips and induced the formation of tiny lipid raft-like gel domains. The membranes were then freeze-dried for analysis using the Lab’s high-resolution secondary ion mass spectrometer, the NanoSIMS, one of only five such instruments in the United States.

Using the NanoSIMS, the scientists detected the gel domains at lateral dimensions as small as 100 nanometers (about 1,000 times smaller than the diameter of a human hair) and about five nanometers thick (about two or three molecular layers).

In medicine, the work could assist in better understanding how viruses interact with cells and in developing ways to short-circuit viruses attacking cells. In bioforensics, the research could assist LLNL scientists in characterizing structures within biological pathogens.

"If crimes or terrorist acts are committed, we want to be able to provide law enforcement authorities with all the information possible on the agents or spores that are used," Hutcheon said.

A third possible application, according to Weber, would be to use cell membrane components and the organizational secrets of the cell membrane to create the next-generation biological sensors with increased sensitivity and flexibility.