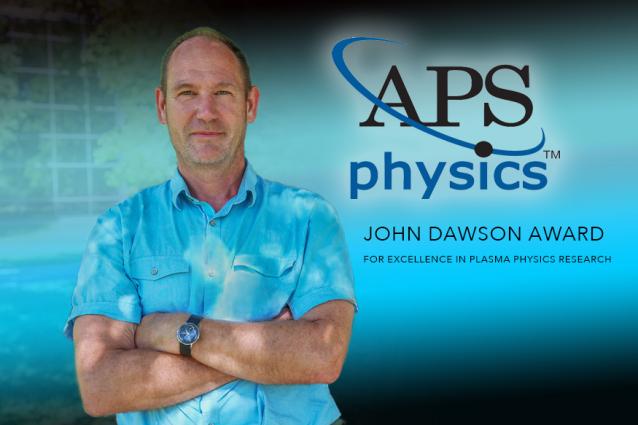 Andrew MacKinnon has earned the John Dawson Award for Excellence in Plasma Physics Research by the American Physical Society’s Division of Plasma Physics.

The annual award recognizes a specific outstanding achievement in plasma physics research. MacKinnon was cited by the APS "for pioneering use of proton radiography to reveal new aspects of flows, instabilities and fields in high-energy-density plasmas."

"Proton probing is a powerful technique for characterizing high energy density plasmas. The discovery of picosecond-duration laser-produced protons by the NOVA Petawatt team in late 1999 opened up the possibility to use protons as a tool to characterize electric and magnetic fields in plasmas that are evolving over picosecond timescales," MacKinnon said. "The popularity of this technique has grown tremendously since the first experiments around 2000 and is continuing to provide insight into transient fields in a variety of hot, dense plasmas."

"I feel very honored to receive this award and would like to thank all my collaborators from LLNL and other Institutions around the world that have helped to develop this technique into such as useful tool," he added.

In addition to MacKinnon, the award also recognizes Marco Borghesi of Queen’s University, Belfast; Chikang Li, Richard Petrasso and Fredrick Séguin of the Massachusetts Institute of Technology; and Oswald Willi of the University of Dusseldorf.

MacKinnon received his bachelor's degree in physics with laser science from Heriot Watt University, Edinburgh, in 1988. From 1989 to 1991, he was a scientific officer at the Atomic Weapons Research Establishment in the United Kingdom, working on the development of high power ND: Glass lasers. In 1991, he joined the plasma physics group at Imperial College, London, to study high power laser plasma interactions and was awarded his Ph.D. in plasma physics from Imperial College in 1996.

From 1996 to 1999, he was a post-doctoral researcher at Imperial College, studying relativistic self-focusing and magnetic field generation in laser-produced plasmas, using the Vulcan laser at the Central Laser facility at the UK’s Rutherford Appleton Laboratory.

In 2017, MacKinnon returned to LLNL to take up a section leader post with the High Energy Density Science organization at the National Ignition Facility. He is a fellow of the American Physical Society, was awarded a visiting research fellowship at the Queens University, Belfast, in 2003-05 and was a visiting professor at the University of Strathclyde, Glasgow, from 2012-15.