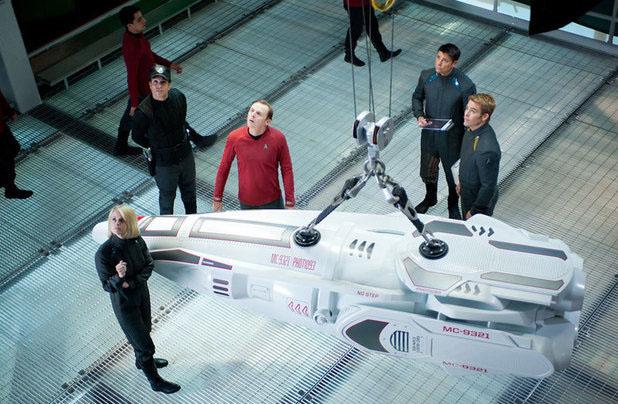 One of many scenes filmed at the National Ignition Facility.

LIVERMORE, Calif. -- The makers of "Star Trek: Into Darkness" went boldly where few have gone before when they visited Lawrence Livermore National Laboratory's National Ignition Facility (NIF), the world's largest and most energetic laser system. With the approval of the Department of Energy, this unique facility was utilized for the first time as a film set.

The filming was conducted in 2012 during a normal maintenance cycle for the facility. All additive costs were completely reimbursed by the film company so as to have no impact on NIF's experimental plan.

Just as the "Star Trek" genre envisions a brighter future for humanity through exploration of the universe, the mission of NIF is to explore physical realms that were previously unobtainable in a laboratory setting. With greater than 50 times more energy of previous lasers, NIF enables the nation to address scientific grand challenges in national security, fusion energy and fundamental science. Built as a centerpiece of the National Nuclear Security Administration's Stockpile Stewardship Program (SSP), NIF provides data required for maintaining the nuclear deterrent without the need for underground testing.

NIF is capable of producing temperatures of hundreds of millions of degrees and pressures of hundreds of billions of atmospheres simulating the conditions in the interior of stars and giant planets like Jupiter. NIF experiments, in addition to supporting the SSP, also are probing supernova explosions and the formation of ultra-high energy cosmic rays with particle energies millions of times greater than can be produced in the largest accelerators on earth. In the short period since completion in 2009, NIF has successfully supported important milestones with more than 1,200 experimental shots.