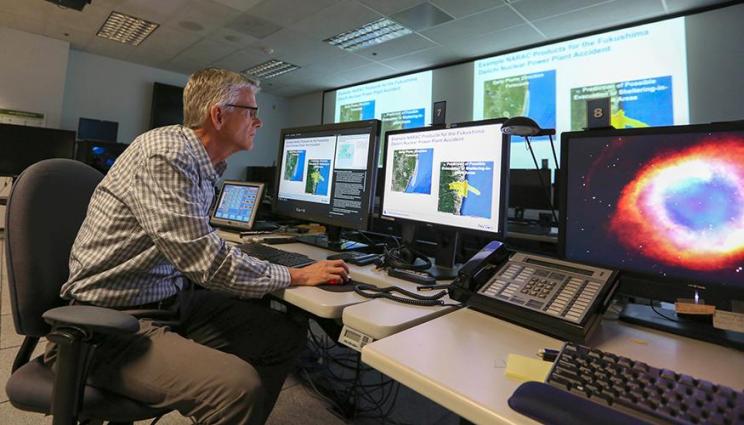 As one of the leaders of Lawrence Livermore National Laboratory's National Atmospheric Release Advisory Center (NARAC), John Nasstrom has sat in on many video conferences.

But on Aug. 7, a video conference with leaders from the National Nuclear Security Administration’s (NNSA) Office of Nuclear Incident Response was one like no other.

As the video conference ended, suddenly the Lab atmospheric scientist became the topic of conversation – and the recipient of the NNSA Administrator’s Distinguished Service Gold Award.

"I really didn’t have a clue this was going to happen," Nasstrom said. "They had their regular video conference, then they said 'we have a special presentation' and started thanking me for my work and career supporting NNSA. The next thing I knew they were presenting me with the Gold Award."

The "virtual" Gold Award presentation, made on behalf of NNSA Administrator Lisa Gordon-Hagerty, was performed in Washington, D.C. during the video conference by David Bowman, the deputy associate administrator for Counterterrorism and Counterproliferation, and J.Q. Crocker, the director of the Office of Nuclear Incident Response.

In Livermore, Nasstrom received the award from Daniel Blumenthal, the consequence management program manager for the Office of Nuclear Incident Response. 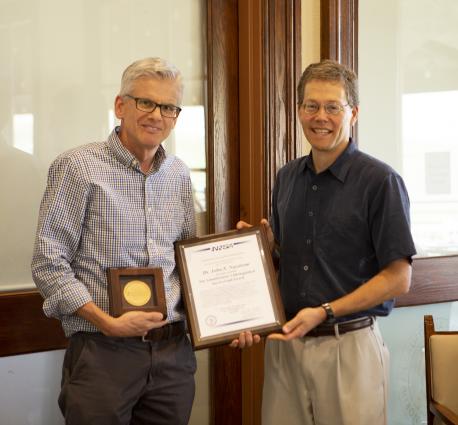 Nasstrom was recognized for his service to United States national security, particularly in the areas of atmospheric dispersion modeling and incident response.

"It is truly an honor to receive this award from an organization that does such critical nuclear security and incident response work, and for which I have been very privileged to support," he said.

Now NARAC’s chief scientist, Nasstrom served as one of the two lead response managers for the Livermore center during the Fukushima Daiichi reactor accident in Japan in 2011.

NARAC, run by LLNL for the Department of Energy’s (DOE) NNSA, operated on a round-the-clock basis for several weeks during the Fukushima crisis and was involved in communication with DOE and NNSA as well as their support of the White House and the U.S. ambassador to Japan.

Nasstrom served as one of NARAC’s primary analysts for several other historic events, including accidents that have occurred at nuclear and industrial facilities, such as the Chernobyl nuclear power plant accident in 1986, and also planning for possible problems, including several NASA nuclear probe space launches.

During his career, he led several efforts to research and develop computer models of atmospheric turbulence and diffusion, validate these models with field and laboratory experiment data and assess radioactive dose distributions in the environment.

In addition, Nasstrom has helped provide the intellectual backbone for the deployment of new computer models and other software improvements to NARAC’s operational computer systems for use in emergency response. He was an original, primary developer of the advanced atmospheric dispersion model that is at the heart of the NARAC computer modeling system.

In part, Nasstrom’s award citation reads: "For leadership, technical excellence and impact in the efforts of the Office of Nuclear Incident Response to manage the consequences associated with the release of hazardous material into the atmosphere and mitigate the nuclear threat."

Nasstrom joined the Laboratory in 1984 and has authored or co-authored more than 100 peer-reviewed journal articles, conference papers and reports.

He received his Ph.D. in atmospheric science from the University of California, Davis.

Nasstrom, who is in LLNL's N Program, becomes the third scientist from the Laboratory’s Global Security Principal Directorate to receive the NNSA Administrator’s Gold Award in the past 20 months, joining Jay Zucca and George Anzelon.