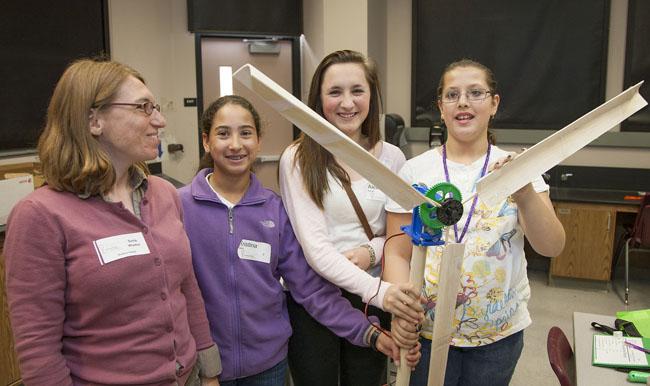 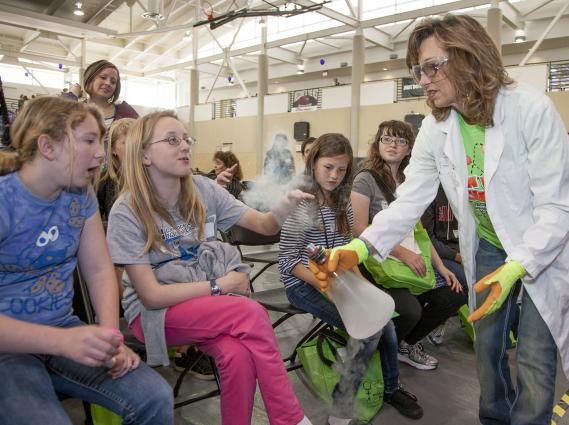 Diane Nelson from LLNL's Discovery Center is one of the many volunteers at this year's EYH Conference. Here she demonstrates the properties of liquid nitrogen. 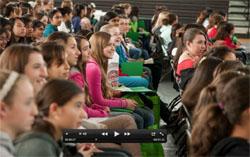 A video of the photos taken at this year's EYH.  (.mov)

More than 300 girls in grades 6 through 9 got a peek at possible careers in science, technology, engineering and math (STEM) when they descended on Las Positas College Saturday. Tri-Valley Expanding Your Horizons, an annual career conference now in its 34th year, was a success, according to the group of volunteers from Lawrence Livermore and Sandia national laboratories who coordinate the popular event.

"It was a thrill for us to go back to our roots at the Las Positas College campus and use its recently completed science facility, as well as the gymnasium and other classroom space on the expansive Livermore campus," said co-chair and organizer Susan Springer of LLNL who referred to the Las Positas locale as the conference's original location back in its early years.

The theme for the event was "Get Connected with Your Future." Kicking off the conference was a video produced by co-chair Sheri Miner, which included interviews of women in science and clips of previous conference participants. Many of the attendees who were prior participants were delighted to see themselves in the video.

The Tri-Valley conference targets girls from Livermore, Pleasanton, Dublin, San Ramon and Sunol but is open to girls outside this area. The daylong event offered a variety of 90-minute hands-on workshops with catchy titles like: "It's Cool To be Hot" about infrared imagery and "Fingerprinting Whodunnit?" that featured the history and science behind fingerprints.

Also on the agenda was a career fair where girls met and mingled with professional women who are successful in STEM careers. And, during a "Mystery Woman" activity, girls tested their investigative skills conducting interviews to match women with the professional careers based on their favorite subjects in school, academic degrees and current interests or hobbies.
The conference hopes to inspire girls to keep their minds open and explore all of their career options, and to realize that science is a "girl thing," too, Springer said.

There also was something for parents during the conference -- a session about preparing their children for college and stirring their interest in science careers, conducted by Las Positas College and Techbridge.

"EYH is completely a volunteer effort," Springer emphasized. "We are always seeking female professionals to lead or help in the hands-ons workshops at future conferences. It is very rewarding to participate."

Volunteers can send an tveyh [at] llnl.gov ( e-mail ) if they are interested in participating in the conference for 2014.