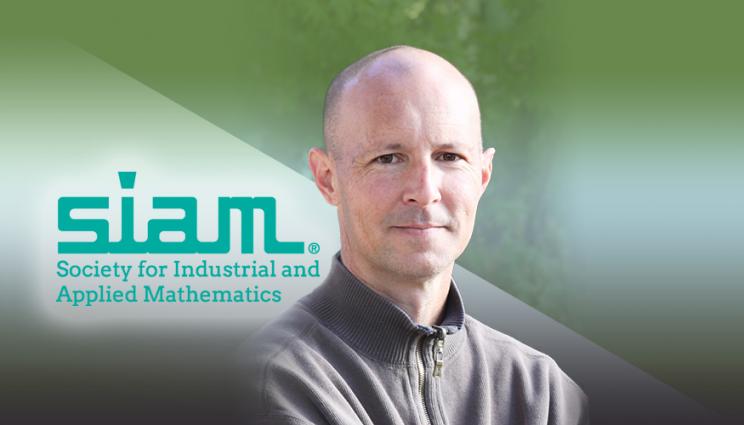 The Society for Industrial and Applied Mathematics (SIAM) has announced its 2021 Class of Fellows, including Lawrence Livermore National Laboratory computational mathematician Rob Falgout. Falgout is best known for his development of multigrid methods and for hypre, one of the world’s most popular parallel multigrid codes.

The Society for Industrial and Applied Mathematics (SIAM) has selected Lawrence Livermore National Laboratory (LLNL) computational mathematician Rob Falgout as an esteemed member of its 2021 Class of SIAM Fellows.

The prestigious honor recognizes Falgout, a Distinguished Member of the Technical Staff in LLNL’s Center for Applied Scientific Computing, for his “contributions to the theory, practice and large-scale applications of multilevel solvers and for widely used parallel software,” as well as his outstanding service to the community, according to the organization.

“It’s an incredible honor to be named a SIAM fellow and to be listed alongside such remarkably talented people,” Falgout said.

Falgout, one of 28 researchers chosen for the 2021 class, is best known in the field of mathematics for his development of multigrid methods and for hypre, one of the world’s most popular parallel multigrid codes. The code won an R&D 100 award in 2007 and is a key component of the Department of Energy’s FASTMath Institute. It is widely used to support simulations in a variety of application areas, such as groundwater flow, magnetic fusion energy plasmas, blood flow through the heart, pumping activity in oil reservoirs and fluid flow in steam generators for nuclear power plants.

Falgout also co-developed the multigrid reduction in time (MGRIT) algorithm, a method for creating parallelism in the time dimension that can be exploited on parallel computers to greatly accelerate time-dependent simulations.

Falgout joined LLNL as a postdoc in 1991 after earning his Ph.D. in applied mathematics from the University of Virginia. He co-developed concurrent BLAS algorithms for dense matrix algebra and then led the early technical development of the ParFlow groundwater flow code that is being used today to do watershed modeling on a continental scale. In addition to leading the hypre effort, he currently heads the XBraid parallel time integration project.

In addition to his research achievements, Falgout has served on the editorial boards for the SIAM Journal on Scientific Computing and the journal Numerical Linear Algebra with Applications, and is co-chair of the Copper Mountain Conference on Multigrid Methods. He also has mentored more than 30 students and postdocs and served on eight Ph.D. committees.

“Rob’s work on mathematics, algorithms, software and applications has had enormous impact at LLNL and worldwide,” said LLNL’s Associate Director for Computing Bruce Hendrickson. “His selection as SIAM fellow is richly deserved — an honor given to only 0.2 percent of members this year.”

SIAM’s fellows program seeks to distinguish SIAM members for outstanding contributions to the discipline, help make SIAM members more competitive for awards and honors, and support the advancement of members to leadership positions, according to the organization. Fellows are designated by a 16-member selection committee.

SIAM is an international society of more than 14,500 individual, academic and corporate members from more than 100 countries. SIAM aims to build cooperation between mathematics and the worlds of science and technology to solve real-world problems through publications, conferences and communities like chapters, sections and activity groups, according to the organization’s website.