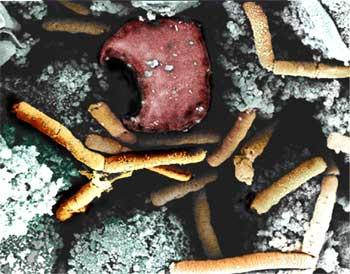 Nanolipoprotein (NLP) technology is a potential breakthrough in vaccine development. Today, many vaccines are based on a single protein derived from a specific pathogen (bacterial, viral, fungal).  The idea is that the body "sees" the protein as foreign and mounts an immune response to kill the invader, which keeps the body free from disease.

However, this approach to vaccine design has not been as effective as whole organism vaccines in protecting people from getting sick. NLP technology, pioneered by Lab scientists Paul Hoeprich, Matt Colman, Nick Fischer and Craig Blanchette has the potential to revolutionize vaccine design, constituting a novel next-generation vaccine that can more readily prevent disease and better protect people.

To achieve this, the scientific team has developed methods to mix NLPs with specific pathogen-derived proteins. After the NLP and the proteins are mixed, the proteins anchor to the surface of the NLP.

Effectively, the NLP provides a delivery platform for the proteins of interest, and it is this construct that has been used successfully as a vaccine in mice.

Under Hoeprich's direction, Fischer, Blanchette and other scientists have used NLPs to create a successful vaccine against West Nile Virus.  These experiments led to some key observations regarding the NLPs:

Based on this large body of NLP-related work, LLNL has secured a series of patents to protect the intellectual property resulting from the NLP team's inventions.  "The NLP will become a platform for an entire new generation of treatments," Hoeprich said.  "The NLP will be like an operating system, and a wide range and variety of applications can be built for it."

The Lab's share of the grant will come to about $2.5 million during the five-year period and will help support a team of approximately six scientists, many of whom have spent years pioneering NLP technology, said Amy Rasley, the LLNL biomedical scientist who co-authored the proposal along with Hoeprich and Adam Driks of Loyola University.  And, according to Rasley, the new project fits nicely into LLNL's broader efforts to pursue NLPs for a variety of novel research applications.

"Winning this grant is a direct result of the Lab identifying and nurturing our NLP technology and building the infrastructure to support the research.  LLNL is the only Department of Energy facility with a BioSafety Level 3 lab," Hoeprich said.  "This investment is paying off with the NIH grant and five other NLP projects are under way...and we're just getting started."

"I spent most of my career working for pharmaceutical companies," said Hoeprich.  "Working at the Lab is like a dream come true for me because I've been able to come up with some interesting ideas and do the science necessary to turn them into tools that can impact global health, especially in under-developed countries."