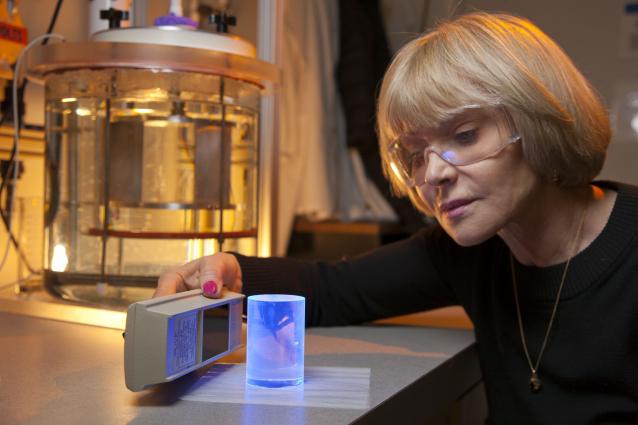 Natalia Zaitseva, an LLNL materials scientist, leads a team of Livermore researchers that has developed the first plastic material capable of efficiently distinguishing neutrons from gamma rays, something not thought possible for the past five decades or so.

The Livermore technology -- the first plastic material capable of efficiently distinguishing neutrons from gamma rays -- was honored in the "best nuclear/radiation detection" category.

The award was presented during a Nov. 29 dinner that attracted more than 200 government officials and industry leaders at the Washington D.C. Convention Center.

The breakthrough of using plastic materials to differentiate between neutrons and gamma rays is something that was thought not to be possible for the previous five decades or so until the LLNL team's January 2012 announcement.

With the material's low cost, huge plastic sheets could be formed easily into dramatically larger surface areas than other neutron detectors currently used and could aid in the protection of ports, stadiums and other large facilities.

In their paper, the LLNL team wrote: "Efficient pulse shape discrimination (PSD) (between neutrons and gamma rays) combined with easy fabrication and advantages in deployment of plastics over liquids may lead to widespread use of new PSD materials as large-volume and low-cost neutron detectors."

In addition, LLNL researcher Steve Payne, who heads the team with materials scientist Natalia Zaitseva, said: "On balance, the plastic scintillators may turn out to be best for detecting neutrons once the factors of usage in the field, cost, and performance are taken into consideration."

The technology has been commercially licensed to a Texas-based company, Eljen Technology.