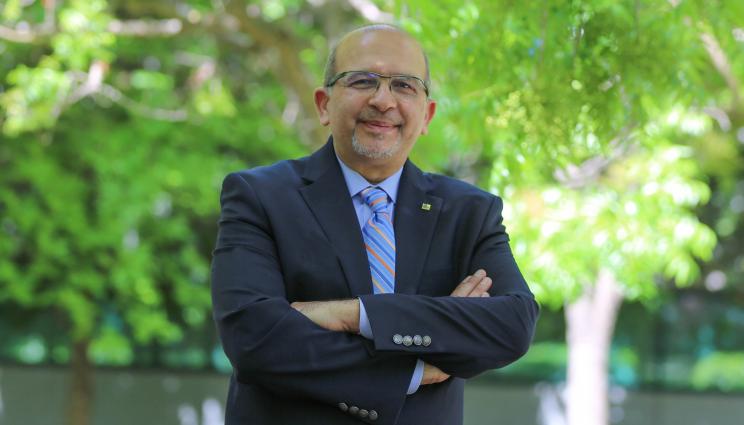 Fady Najjar, a design physicist at Lawrence Livermore National Laboratory (LLNL), has been elected a fellow of the American Society of Mechanical Engineers (ASME). Najjar was recognized for "significant contributions and innovations in computational techniques for fluid flows, for advances in understanding of high-speed gas particle flows including shock physics, for advances in simulations of flow fields in solid rocket motors and high-speed reacting flows."

Najjar’s nomination grew largely from the reputation he built while studying space shuttle rocket boosters as a research scientist at the  University of Illinois, his alma mater. The research aimed to develop a better understanding of the chaotic mixing that takes place when solid aluminized fuel burns and the turbulent plume that results. That work, and his experience running multiphase physics simulations, led him to LLNL 10 years ago.

"My research has always been about understanding complex physics problems with computational simulations," Najjar said. "While studying the rocket boosters, I was working to understand the chaotic mixing of fluids of different densities. Not long after, I was given an opportunity to take that sort of research to the next level here at the Lab."

While Najjar is a mechanical engineer by training, with a Ph.D. in mechanical engineering from the University of Illinois, he has applied his skill simulating ejecta and fluid dynamics of energetic materials as a design physicist in the Weapons and Complex Integration (WCI) Directorate at LLNL.

During the 22 years Najjar has been an ASME member, he has co-authored more than 40 refereed publications and 30 technical reports and delivered more than 60 presentations at international conferences and technical meetings.

Less than 4 percent of ASME’s 91,078 members are fellows. Najjar’s nomination was sponsored by his former Ph.D. adviser from the University of Illinois, Surya Vanka, who also is an ASME fellow, and was supported by three nomination letters.

"This fellowship is a real privilege bestowed on me," Najjar said. "It feels like I’ve leveled up, and I am excited to accept the responsibility of representing the Lab, the University of Illinois and all ASME members as a fellow."