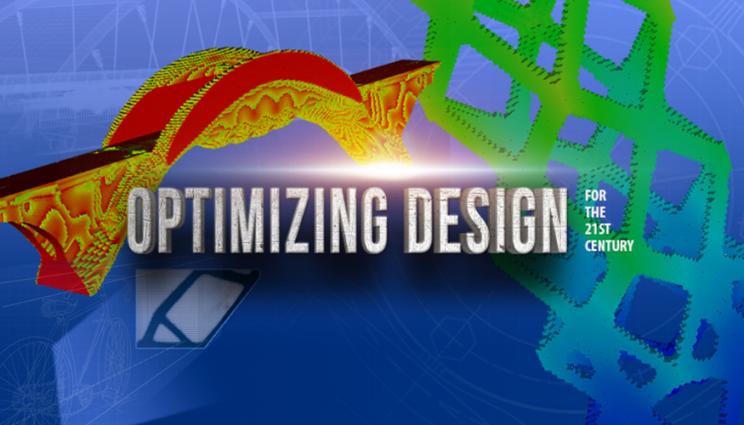 The emergence of additive manufacturing (3D printing) and powerful multi-physics computer simulations have enabled design to reach unprecedented levels of complexity, expanding the realm of what can be engineered and created. However, conventional design tools such as computer-aided design (CAD) and computer-aided engineering (CAE) have not caught up to advanced manufacturing technologies and the sheer number of design possibilities they afford.

"I want to solve real, relevant problems," said center director Dan Tortorelli, who recently came to the Lab from a mechanical sciences and engineering professorship at the University of Illinois at Urbana-Champaign. "We want to take the great simulation capabilities that we have with our supercomputers, along with optimization and our AM (additive manufacturing) capabilities, and combine them into a single systematic design environment."

Although optimization has been around since the 1980s, Tortorelli said, it has been largely limited to linear elastic design problems and is often performed through trial and error, looping a simulation over and over with different parameters until reaching a functional design. The process is not only time-consuming and tedious, it’s also expensive. Through the SI, researchers want to have computers do the repetitive work, freeing up engineers to focus their attention on more creative matters.

"It may surprise some people but engineers are still doing things by trial and error -- even if they are doing simulations, it is still trial and error," said Computational Design Optimization project co-lead Dan White. "We are trying to give the computer the objectives and constraints, give it a list of materials to use, then it does the calculations and designs the part for us. This is a new way of thinking about engineering and design."

Ultimately, researchers want to have a fully integrated optimization program that incorporates multiple scales, complex physics and transient and nonlinear phenomena. By no longer adhering to outdated design paradigms, researchers said, the possibilities are essentially endless.

"Fundamentally changing the way design is done is really what we want to do," said Rob Sharpe, deputy associate director for research and development within Engineering. "We want to be able to design things that are so complicated that human intuition isn’t going to work…Almost all design work has been done for things that are static. But a lot of the things that we want to create, we want it to be dynamic and, in some cases, push it until it fails, and we want them to be designed to fail in a specific way. In addition, if we just used all the advanced AM techniques to make the same designs, we’d be missing the point. That’s really why we started the center."

Current 3D printers have the resolution to create parts with millions, even billions of parameters, in theory placing a different material at every point in the structure. To optimize design for those printers, engineers will need the same level of resolution in their design software, White said, a feat only possible through high-performance computing.

"It’s already designing things better than a human could do," White said. "The idea is that the computer is doing this work on the weekend when we are not here. It is fully automated; the computer sorts through all the scenarios and comes up with the best designs."

So far, researchers have designed different micro-architected lattice structures with new properties, including those with negative coefficient of thermal expansion (i.e., lattices that contract when heated or expand when cooled) or negative Poisson’s ratio (i.e., lattices that expand laterally when stretched or contract when compressed, which is opposite of most materials -- for example, a rubber band). Other research has been done to design electrodes, multifunctional metamaterials, carbon-fiber-reinforced composites and path planning for direct ink writing (a 3D printing process) onto curvilinear surfaces. The advances someday could be applied to optimize armor plating for military vehicles, blast and impact-resistant structures, optics and electromagnetic devices, researchers said. Interestingly, some of the designs generated have resembled "organic" shapes found in nature, Sharpe said.

"A lot of what nature has done is to do evolutionary optimization over time," Sharpe said. "Human efforts inspired by these are often called biomimetic designs -- and some do almost have an organic look…We’re moving to where the computer fully explores the possibilities, does the work and shows the possibilities. We can now begin to explore complex, nonlinear, multi-function, dynamic designs for the first time. The computer is going to be able to do larger problems than humans could possibly do -- we’re talking about a billion design variables. It’s going to change the way people approach design problems and the way engineers interact with all these tools."

There’s a strong link between AM and design optimization, according to LLNL engineer Eric Duoss, because of the ability to control both material composition and structure at multiple length scales with 3D printing.

"With new printing approaches, we can deterministically place material and structure into previously unobtainable form factors; that means we really need to rethink design not only to keep pace with manufacturing advances, but to fully realize the potential of AM," said Duoss, who is working on a project to optimize printing 3D lattices onto 3D surfaces. "Achieving the goals of this strategic initiative would be revolutionary for design and have far-reaching impact beyond just additive manufacturing, but it’s a really hard problem. There’s a real need for the proposed capability right now, and we’re going to scramble to get there as fast as we can."

In January, the Defense Advanced Research Projects Agency (DARPA) awarded a multimillion dollar grant to LLNL, Autodesk, the UC Berkeley International Computer Science Institute (ICSI) and the University of Texas at Austin, to institute a project called TRAnsformative DESign (TRADES), aimed at advancing the tools needed to generate and better manage the enormous complexity of design afforded by new technologies.

Under the four-year DARPA project, LLNL will be using its high-performance computing libraries to develop algorithms capable of optimizing large, complex systems and working with Autodesk to create a more robust and user-friendly graphical interface. The algorithms, when combined with emerging advanced manufacturing capabilities, will be used to design revolutionary systems for the Department of Defense.

"As part of that project, we encountered challenges that helped inspire our current efforts in design," said Duoss, a principal investigator on the project. "Almost by definition, helmets are required to function under highly nonlinear and dynamic conditions. Turns out those conditions are hard to simulate, let alone design for, and it is certainly a new area for design optimization. With the Autodesk collaboration, we collectively identified these gaps in capability and knew the time was right to assemble a team to attack these difficult problems."

LLNL looks to be world leader

About a dozen LLNL employees are part of the Computational Design Optimization strategic initiative. In the coming years, they will work to improve the LiDO program to perform generalized shape optimization, ensure accurate simulations, increase optimization speed through Reduced Order Models (ROMs) and accommodate uncertainty.

Specific projects include multi-physics lattices with optimal mechanical, heat transfer and electromagnetic responses, to create antennas with sufficient strength and gain. Researchers also want to enhance fabrication resolution in their designs down to the submicron level, to potentially design and manufacture lenses for optics simpler, cheaper and not necessarily parabolic.

Other goals are to investigate machine learning, and consider a variety of response metrics. A benchmark problem will be the optimization of a large 3D-printed part consisting of a spatially varying lattice to illustrate LiDO’s ability to incorporate ROMs. Optimization under uncertainty using models derived from Lab data, and the utilization of domain symmetry to simplify the analysis and design process also will be investigated.

At the end of the three-year SI, the researchers hope to have funding from various Lab programs and go from having almost no capabilities in design optimization to being one of the world leaders.

"We want to do this inverse problem where we know the outcome that we want and what our design domain should be," Tortorelli said. "We want to be able to define the parameters, press a button and have it come out the way we want. We are not taking the designers or engineers out of the loop. We are not saying, ‘do away with them.’ We are saying, ‘do away with the drudgery.’ We are simplifying their lives so they can be more creative."