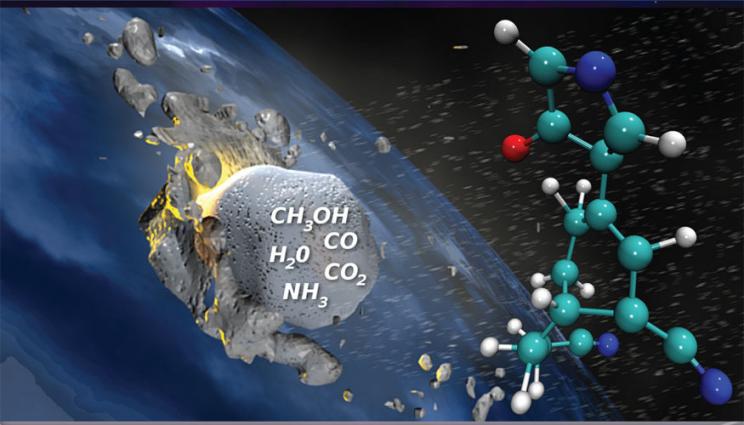 Synthesis of prebiotic hydrocarbons in impacts of simple icy mixtures on early Earth.

Life on Earth shockingly comes from out of this world

Early Earth was not very hospitable when it came to jump starting life. In fact, new research shows that life on Earth may have come from out of this world.

Lawrence Livermore scientist Nir Goldman and University of Ontario Institute of Technology colleague Isaac Tamblyn (a former LLNL postdoc) found that icy comets that crashed into Earth billions of years ago could have produced life building organic compounds, including the building blocks of proteins and nucleobases pairs of DNA and RNA.

Comets contain a variety of simple molecules, such as water, ammonia, methanol and carbon dioxide, and an impact event with a planetary surface would provide an abundant supply of energy to drive chemical reactions.

"The flux of organic matter to Earth via comets and asteroids during periods of heavy bombardment may have been as high as 10 trillion kilograms per year, delivering up to several orders of magnitude greater mass of organics than what likely pre-existed on the planet," Goldman said.

Goldman's earlier work is based on computationally intensive models, which, in the past, could only capture 10-30 picoseconds of a comet impact event. However new simulations, developed on LLNL's supercomputers Rzcereal and Aztec, Goldman used much more computationally efficient models and was able to capture hundreds of picoseconds of the impacts -- much closer to chemical equilibrium.

"As a result, we now observe very different and a wider array of hydrocarbon chemical products that, upon impact, could have created organic material that eventually led to life," Goldman said.

Comets can range in size from 1.6 kilometers up to 56 kilometers. Comets passing through the Earth's atmosphere are heated externally but remain cool internally. Upon impact with the planetary surface, a shock wave is generated due to the sudden compression. Shock waves can create sudden, intense pressures and temperatures, which could affect chemical reactions within a comet before it interacts with the ambient planetary environment. An oblique collision where an extraterrestrial icy body impacts a planetary atmosphere with a glancing blow could generate thermodynamic conditions conducive to organic synthesis. These processes could result in significant concentrations of organic species being delivered to Earth.

The team found that moderate shock pressures and temperatures (approximately 360,000 atmospheres of pressure and 4,600 degrees Fahrenheit) in a carbon-dioxide-rich ice mixture produced a number of nitrogen-containing heterocycles, which dissociate to form functionalized aromatic hydrocarbons upon expansion and cooling. These are thought to be prebiotic precursors to DNA and RNA base pairs.

In contrast, higher shock conditions (about 480,000 to 600,000 atmospheres of pressure and 6,200-8,180 degrees Fahrenheit) resulted in the synthesis of methane and formaldehyde, as well as some long-chain carbon molecules. These compounds are known to act as precursors to amino acids and complex organic synthesis. All shock compression simulations at these conditions have produced significant quantities of new, simple carbon-nitrogen bonded compounds upon expansion and cooling, which are known prebiotic precursors.

"Cometary impacts could result in the synthesis of prebiotic molecules without the need for other 'special' conditions, such as the presence of catalysts, UV radiation, or special pre-existing conditions on a planet," Goldman said. "This data is critical in understanding the role of impact events in the formation of life-building compounds both on early Earth and on other planets and in guiding future experimentation in these areas."

The research will appear on the cover of the June 20 issue of The Journal of Physical Chemistry A .