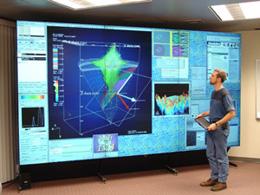 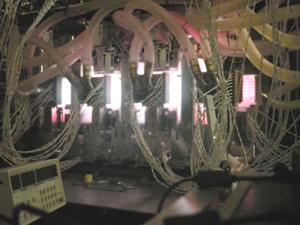 Five teams of LLNL researchers, including two with industrial or university collaborators, have won plaques from the trade journal R&D Magazine for being among the top 100 industrial innovations worldwide for 2003.

This year’s R&D 100 awards, often called the "Oscars of invention," will be presented Oct. 14 during a black-tie dinner at the Navy Pier Convention Center in Chicago.

"With this year's awards, the Laboratory has garnered more than 100 R&D 100 plaques for our research and development," said Rokaya al-Ayat, LLNL associate deputy director for Science and Technology.

"An important factor for the Laboratory's success in this international competition is that we have many creative and innovative researchers from different disciplines working together to address challenging national problems," she added.

For the second straight year, LLNL researchers have won an R&D 100 award for developing advanced technologies to rapidly detect the airborne release of biological threat agents.

This year’s winner, the Autonomous Pathogen Detection System (APDS), is an automated, podium-sized instrument that can monitor the air for all three types of biological agents (bacteria, viruses and toxins).

The APDS can be deployed for a week without human intervention and can report any pathogen releases in its vicinity to operators at a central location. Work has been under way to develop APDS for about five years.

A team of laser scientists and engineers has built upon LLNL's Solid-State Heat Capacity Laser, which is designed to destroy mortars and missiles in short-range battlefield defense.

The new diode-pumped pulsed laser can be used to uncover and safely neutralize buried land mines, which are a worldwide problem. Today, there are an estimated 100 million land mines spread throughout 70 nations.

With an output power of more than 10,000 watts, making it the most powerful diode-pumped solid-state laser in the world, the laser is fired in a pulsed mode, producing a peak power of up to half a million watts. When aimed at a buried mine, this high peak power rapidly heats the ground, causing it to burst aside and expose the mine. Digging rates are up to 40 centimeters per second. Once exposed, the mine is benignly burned out rather than dangerously exploded.

The laser is compact and fits on a vehicle. This advance allows land mines to be safely neutralized at up to a quarter mile away without the need to expose it manually. Attempts to expose mines manually result statistically in one death for every 5,000 successfully neutralized mine. Other laser-based mine-clearing approaches have had to rely on personnel to go out into the field and dangerously expose the mine before a laser or explosive means can be used.

Another advantage is that the laser significantly reduces the problem of false positives, since the object under examination - a land mine, rock or other debris - can be destroyed in seconds. It is now practical to check all questionable buried items since a mine field can be rapidly checked.

Riding above the rails

This R&D 100 award is shared by LLNL researchers and San Diego-based General Atomics. Currently, a full-scale, 400-foot-long test track is nearing completion at General Atomics in San Diego, with a full-sized vehicle chassis and all associated power and control systems.

With help from Russian physicist and LLNL employee Dmitri Ryutov, the team found the Inductrack system is subject to theoretical analysis that can be converted into computer codes to accurately predict the system’s performance.

Inductrack does not require the complex cryogenically cooled superconducting magnets employed in one of the present types of maglev trains, nor the servo-controlled, powered electromagnets used in the other developed type, both of which are expensive to build and operate. Inductrack employs unpowered arrays of permanent magnets beneath the vehicle. When the train is in motion, the magnetic field from these permanent magnets generates levitation by interacting with a "track" made up of conductors assembled in an array that resembles a ladder with close-packed rungs.

A software architecture called Chromium was designed and developed by two LLNL computer scientists in collaboration with researchers from Stanford University, the University of Virginia, Charlottesville, and a commercial company, Tungsten Graphics.

Chromium provides a way for interactive two and three dimensional graphics applications to take full advantage of powerful distributed, graphics-enabled clusters of off-the-shelf or commodity personal computers. It provides an extensible mechanism that allows applications to draw computer graphics imagery on such clusters with a high degree of data, display and performance scalability, and offers unique capabilities not previously available in existing systems.

Chromium allows most existing applications to run without modification, and enables creation of powerful new parallel graphics applications capable of fully exploiting the power of these clusters.

This advanced architecture draws its name from the phrase "Clustered Rendering," or CR for short. CR also is the atomic symbol for the element Chromium, providing the project name.

Since its Open Source public release, the Chromium system has proven to be an extremely popular program, with more than 18,000 downloads of the software. The Chromium infrastructure has been adopted by a large number of users and is rapidly forming the basis of a great deal of clustering research at national laboratories and a number of other research institutions.

While ribonucleic acid (RNA) interference has only recently been discovered, the field has exploded and the technology has the potential to revolutionize biology, the New England Journal of Medicine wrote in 2002.

SiHybrids provide a significantly increased gene silencing effect and duration to siRNA, the current nucleotide molecule used in the technique. The new LLNL technology also costs about half as much to produce as siRNA.

SiHybrids have the unique ability to be delivered into cells without the aid of a cytotoxic lipid vehicle, which demonstrates the technology’s promise for use in therapeutic agents. A number of applications of the technology are envisioned for both basic research and in improving cancer therapies.

For the past two years, the siHybrid research has been supported by the Laboratory’s NAI directorate.