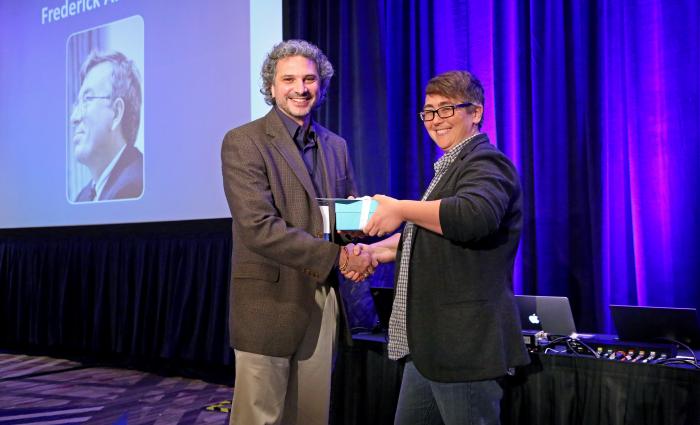 Lawrence Fellow Aurora Pribram-Jones is one of two recipients of the Howes Scholar award presented by the Department of Energy Computational Science Graduate Fellowship (DOE CSGF) Program at its annual program review.

The award, presented Tuesday (July 26), was established to honor Fredrick Anthony Howes, who managed the DOE Applied Mathematical Science Program during the 1990s. Each year, a recent graduate of the CSGF program is selected for the award based on his or her demonstrated scientific achievement, leadership and service.

"On a personal level this award makes things different for me," said Pribram-Jones, who is conducting her research with the Quantum Simulations Group at Lawrence Livermore National Laboratory (LLNL). "Most of these people would present videos of fluid dynamics at conferences, but I do a lot of paper and pencil work. It’s a big honor to receive this award. I don’t quite believe it wholeheartedly yet."

Pribram-Jones uses mathematics to computationally predict the basic properties of matter. But if asked about specifics, she will tell you passionately about her interest in potential functional theory, linear response for thermal ensembles and mathematical conditions on finite-temperature exchange-correlation functionals. Her research in these areas has appeared in Physical Review, Journal of Chemical Physics and Annual Reviews of Physical Chemistry.

In addition to her work with LLNL, Pribram-Jones is a postdoctoral fellow at UC Berkeley, and she collaborates with researchers at Harvey Mudd College. Serving as a liaison between research organizations enables her to bridge gaps and further common areas of scientific inquiry.

For instance, Pribram-Jones is working with the LLNL HyMARC team, which is part of a consortium of DOE labs focused on advancing solid-state hydrogen storage. She is using calculations from Berkeley to get a focused view of how hydrogen is absorbed into specific sites in a material, and then pairing that view with wider-focused calculations from LLNL. The net result will be a more holistic, multiscale view of material behaviors.

"I love this bridging of different regimes," she said. "I live in between worlds a lot anyway, socially. So for me to be able to do that scientifically is amazing. Connecting physics and math and quantum mechanics, that’s all about bridging perceived chasms. Being able to capture parts of seemingly disparate worlds is amazing to me."

Pribram-Jones’ path to a Ph.D. was not straight and narrow. She left high school at age 15 "because life got complicated" and eventually found herself working in a book store, often staying late to read and satiate her curiosity with math and science.

"I started getting really excited about the cascades that happen when something like a photon hits your retina," she said. "I figured if I enjoyed that in my off time, I might as well go back to school."

She tested into a science program at a local community college and met a life-changing mentor in a math teacher. A decade and a doctorate degree later, she’s earning a slew of prestigious national fellowships.

Her activities in the community include co-founding a program to help senior undergraduates and new graduate students apply for national fellowships at UC Irvine, and mentoring undergraduate mathematicians and scientists at Harvey Mudd and UC Irvine. During her final year at Irvine, she served on the Diverse Educational Communities and Doctoral Experiences Student Council as the Physical Sciences Division representative and volunteered as a teaching assistant for graduate courses.

"I love teaching, and I also hope I get to continue working with the DOE labs," she said. "We need to give students a larger view into the labs as part of their future. I only learned about the labs because of the fellowship opportunities. Many think academia and industry are their only options. But there are of advantages to working at a national lab.

"At Livermore I’m trying to be more computational. It’s such a great place to learn from experts. There’s so much computation here compared to other places I’ve been. People are excited by it."