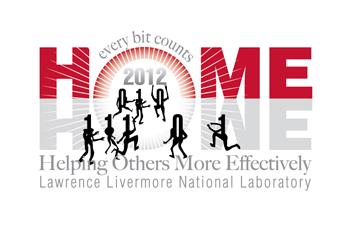 Laboratory employees pledged more than $2.5 million to the HOME Campaign (for Helping Others More Effectively) -- an annual charitable drive that benefits community/nonprofit agencies in the Tri Valley, San Joaquin Valley and Greater Bay Area. In addition, Lawrence Livermore National Security, LLC, which manages the Lab for the U.S. Department of Energy, announced it would donate $1 million in matching funds.

The total contribution represents one of the largest amounts raised in the 38 years of conducting the HOME Campaign.

"Once again this year, our employees have shown their generosity and commitment to helping our neighbors," said Parney Albright, LLNS president and director of the Laboratory. "The local organizations and those they serve, will benefit from our HOME Campaign contributions. We are glad to have this opportunity to make a difference."

Since 2007, the Lab's HOME Campaign has raised more than $2 million annually through donations that go directly to agencies selected by employees.

Again this year, the LLNS Board of Governors announced LLNS, would match the first $1 million raised in the campaign.

LLNS is a limited liability company that includes Bechtel National, Inc., the University of California, the Babcock & Wilcox Company, the Washington Division of URS Corporation, and Battelle. The HOME Campaign is one of the Tri-Valley's most generous annual charity drives, and is a major community support activity for the Laboratory. This year through the campaign, Lab employees pledged donations via payroll deduction or gave onetime donations to benefit more than 600 agencies of their choice.

Giving animals in need a HOME