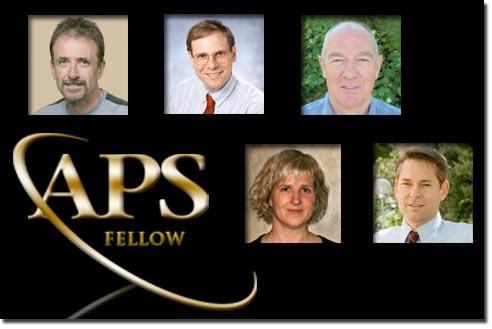 APS fellowships are a distinct honor given after extensive review. Election to APS fellowship is limited to no more than one half of one percent of APS’ membership for a given year. Receiving a fellowship reflects the honor and approbation of one’s professional peers. This year, more than 200 members were elected APS fellows.

This year’s Laboratory recipients include:

David K. Bradley , a physicist in the Lab’s Shock Physics Group of the Lab’s Physical and Life Sciences Directorate. Bradley, who has been at the Lab for 11 years, was honored for "the development and use of high speed optical and X-ray instrumentation to discover new phenomena in high-energy density plasmas."

Laurence Fried , a group leader in the Chemical Sciences Division of the Physics and Life Sciences Directorate. Fried, who has been at LLNL 17 years, was recognized for "outstanding contributions to the physics and chemistry of shocked materials, the high-pressure, high-temperature equations of state of solids and liquids, and the prediction of energetic material reactivity, most notably the existence of sub-picosecond chemistry in high temperature dense fluids."

Arthur Molvik , a Lab retiree since July 2007, who worked in the Fusion Energy Program. He was honored for "outstanding contributions to diverse areas of plasma physics and technology, including MHD stability limits in mirrors, and the physics of gas and electron accumulation in the ion accelerators."

Christine Orme , who joined the Lab in 1996, is a staff scientist in the Biosciences and Biotechnology Division of the Physical and Life Sciences Directorate. She was honored for her "outstanding contributions in understanding the fundamental physics of crystallization and materials assembly with application to biomineralizaion, biomimetic synthesis, and shape control of nanostructures."

Scott Wilks , a research scientist in the Physics Division of the Physical and Life Sciences Directorate, who has been with the Lab for 21 years. He was honored for "pioneering contributions to the understanding of intense and ultra-intense laser plasma interactions and their applications to high-energy density science, including fast ignition, ion acceleration and positron generation."