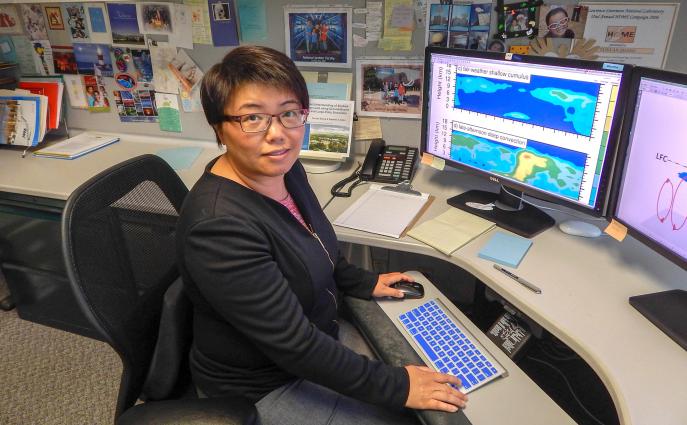 Lawrence Livermore’s Yunyan Zhang, a climate scientist in the cloud process group within the Atmospheric, Earth and Energy Division, has earned $2.5 million for research to improve the understanding of how soil moisture and surface diversity affect cloud formation and precipitation.

As the recipient of the Department of Energy Early Career Research Program (ECRP), Zhang will receive $500,000 for five years to support the development of her research titled, "The Effect of Soil Moisture and Surface Heterogeneity on Clouds and Precipitation: Inferences from ARM Observations and Large Eddy Simulations." Zhang’s project was selected by the Office of Biological and Environmental Research.

The DOE’s Early Career Research Program, now in its sixth year, is designed to bolster the nation’s scientific workforce by providing support to exceptional researchers during the crucial early career years, when many scientists do their most formative work.

"The good news came as a surprise. I feel so honored and thrilled to receive this highly competitive award," Zhang said. "It has been extremely lucky for me to work with my mentor and my colleagues in the cloud processes group and the Program for Climate Model Diagnosis and Intercomparison (PCMDI). Their outstanding work and dedication on climate science inspired me in many ways in the past eight years. I am so honored to be here among them at the Lab."

"It has always been fascinating for me to study the life cycle of clouds," she said. "I make observational analysis using both in-situ and remote sensing data from field campaigns or long-term observations at DOE Atmospheric Radiation Measurement (ARM) climate facilities. "

This year,DOE selected 44 awardees; 27 awardees were at universities and 17 at National Laboratories.

Soukhanovskii completed his ECRP magnetic fusion energy project in April of this year, saying it was "a success, completed safely, on time and on budget." His accomplishments include: