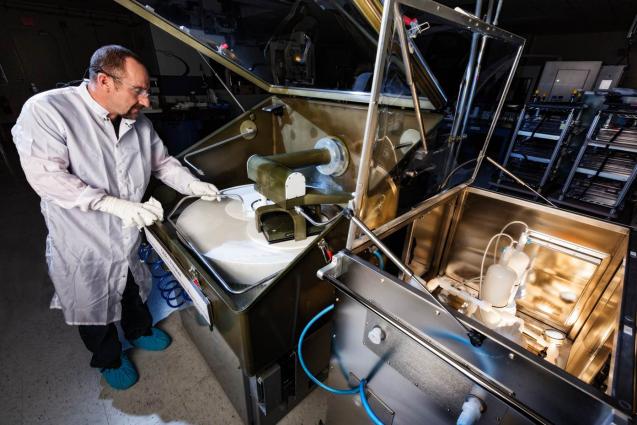 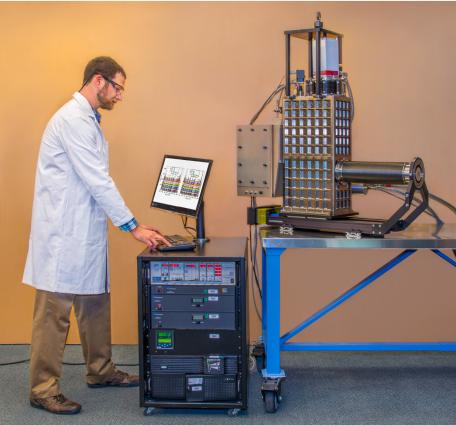 Matthew Carpenter, a graduate student in the Advanced Detector Group at Lawrence Livermore National Laboratory, analyzes high-resolution spectra from the Superconducting Tunnel Junction X-ray Spectrometer on the table. The LLNL-developed spectrometer has won an R&D 100 award. Photo by Roy Kaltschmidt

Lawrence Livermore National Laboratory researchers are the recipients of four awards among the top 100 industrial inventions worldwide for 2013.

The four technologies honored were developed by three teams of LLNL researchers who worked with industrial collaborators, and also by a multidisciplinary Lab team of scientists and engineers.

The trade journal R&D Magazine announced the winners of its annual awards, sometimes called the "Oscars of invention," today. This year's awards will be presented Nov. 7 during a black-tie dinner at the Bellagio Hotel in Las Vegas, Nevada.

With this year's results, the Laboratory has now captured a total 152 R&D awards since 1978. The U.S. Department of Energy laboratories received a total of 32 awards this year.

"These awards recognize the tremendous value of our national labs," said Secretary of Energy Ernest Moniz. "Research and development at the national labs continues to help our nation address its energy challenges and pursue the scientific and technological innovations necessary to remain globally competitive."

"It is a great tribute to our scientists and engineers that we continue to be among the nation's leaders in being recognized for outstanding industrial innovation through the R&D 100 awards competition," said Lab Director Bill Goldstein. "Our scientific teams have applied their world-class capabilities and partnerships with industrial collaborators to develop technologies that will truly benefit the nation."

The R&D 100 awards have long been a benchmark of excellence for industry sectors as diverse as telecommunication, high-energy physics, software, manufacturing and biotechnology.

For industry leaders, government labs and academic institutions, the awards can be vital to gauge their efforts in the commercialization of emerging technologies. In winning an R&D 100 award, developers often find the push their product needs to find success in the marketplace.

Two of LLNL's four R&D 100 awards -- one that will make high-accuracy X-ray fingerprinting available and one that is a new method for polishing glass optics -- received internal "seed money" from the Laboratory Directed Research and Development (LDRD) Program. This funding enables the undertaking of high-risk, potentially high-payoff projects at the forefront of science and technology.

A team of LLNL chemists from the Lab'sEnergetic Materials Centerand the Forensic Science Center have developed a miniaturized, portable thin-layer chromatography (TLC) kit called the microTLC that can detect and identify unknown materials. The work was done in collaboration with a St. Petersburg, Florida-based company, Field Forensics Inc.

Originally developed to identify military explosives, the microTLC kit has been modified and now can also detect illicit drugs, selected environmentally sensitive materials and precursors, along with determining the purity of the identified compounds.

The device fills in major capability gaps in field testing for explosives and narcotics. Its detection platform measures 1.5-by-2 inches and requires about three minutes for identification. The chemicals for the instrument are self-contained and it only requires battery power.

The principal applications of the microTLC are for the military monitoring of bulk and residual explosives and for law enforcement to monitor illicit substances such as explosives and drugs. It also could find use in field and laboratory applications for forensics and first responders.

The instrument was built in conjunction with STAR Cryoelectronics of Santa Fe, New Mexico, which developed a user-friendly refrigerator to cool the detectors to the required operating temperature close to absolute zero (-459 degrees Fahrenheit with the push of a button. Extremely cold temperatures are required for superconductivity and thus for the instrument to function.

The higher precision of the STJ X-ray spectrometer over existing technology, along with its ease of operation, could make high-accuracy X-ray fingerprinting available to non-expert users. Since every element produces X-rays with different energies, X-ray fingerprinting permits researchers to identify elements in an unknown sample.

In many complex samples, current semiconductor-based X-ray spectrometers do not permit the high precision needed to distinguish X-ray fingerprints or patterns from all the different elements in a sample, especially if a particular element's concentration is low or its X-rays are very low energy.

The improved precision of the STJ X-ray spectrometer, as compared with conventional X-ray spectrometers, allows for a more accurate determination of the X-ray fingerprint of an unknown sample, giving an analyst a clearer picture of the sample composition.

As a result, computer chip manufacturers could detect smaller impurities in their production processes that affect yield.  Biomedical companies could identify lower toxic metal concentrations in their samples. And, in addition, forensic specialists could track down smaller traces of evidence from crime scenes.

LLNL research teams have long relied on multidisciplinary approaches to solve important scientific challenges. Lab scientists and engineers have developed a new method of optical polishing, termed "convergent polishing," for improving the polishing and finishing of optics for the National Ignition Facility, the world's largest and highest-energy laser facility.

The new technique is capable of finishing flat and spherical glass optics in a single iteration, regardless of the workpieces' initial shape.

The LLNL-developed convergent polishing technique provides a faster, lower-cost finishing process through a combination of process steps and process time reductions. With the new technique, a final workpiece can be completed within a single work shift without operator intervention. The convergent polishing system also provides high workpiece quality, such as for use as laser optics.

Gerard Pardeilhan, a product manager at a California precision optics company, said, "In worldwide academic, astronomical and industrial research labs, there has been a historical effort to realize the holy grail of optical fabrication techniques, coined as 'convergence.' The elusive goal has been achieved repeatedly by the LLNL team, with demonstrated repeated finishing of workpieces."

An optical technology developed by LLNL scientists and two industrial partners allows the beams from many small lasers to be combined to produce a single higher-power beam. Called the "Extreme-power, Ultra-low-loss, Dispersive Element (EXUDE)," the technique enables the separate wavelengths of the smaller lasers to be superimposed into an electrically efficient, single-output laser system.

EXUDE was developed in a partnership with Bothell, Washington-based Lockheed Martin Laser and Sensor Systems, and Boulder, Colorado-based Advanced Thin Films. Using the EXUDE optical element, Lockheed Martin has successfully combined multiple fiber lasers into a single 30-kilowatt beam of light, creating the highest-power laser yet that has been able to maintain excellent efficiency and beam quality.

Possible applications include defense uses and material processing, such as marking, cutting, welding and drilling.

The collaboration combined the optical component development capabilities of LLNL with the fiber laser expertise of Lockheed Martin and the low-loss optical coatings of Advanced Thin Films.