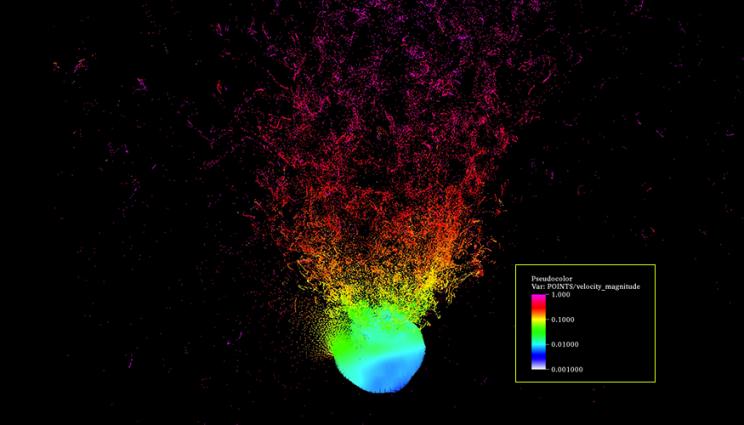 The hydro simulation in Spheral that provided the basis for the analysis: 1 Megaton at a few meters standoff distance from a 100-meter diameter asteroid (with Bennu shape). Colors denote velocities. The legend is cm/us, which is equivalent to 10 km/s.

If an asteroid is determined to be on an Earth-impacting trajectory, scientists typically want to stage a deflection, where the asteroid is gently nudged by a relatively small change in velocity, while keeping the bulk of the asteroid together.

A kinetic impactor or a standoff nuclear explosion can achieve a deflection. However, if the warning time is too short to stage a successful deflection, another option is to couple a lot of energy to the asteroid and break it up into many well-dispersed fragments. This approach is called disruption and it is often what people think of when they picture planetary defense. While scientists would prefer to have more warning time, they need to be prepared for any possible scenario, as many near-Earth asteroids remain undiscovered.

Now, new research takes a closer look into at how different asteroid orbits and different fragment velocity distributions affect the fate of the fragments, using initial conditions from a hydrodynamics calculation, where a 1-Megaton-yield device was deployed a few meters off the surface of a Bennu-shaped, 100-meter diameter asteroid (1/5 the scale of Bennu, a near-Earth asteroid discovered in 1999). See the video.

The work is featured in a paper published in Acta Astronautica with lead author Patrick King, a former Lawrence Livermore National Laboratory Graduate Scholar Program fellow who worked with LLNL’s Planetary Defense group on this research as part of his Ph.D. thesis. King currently works at the Johns Hopkins University Applied Physics Laboratory (JHUAPL) as a physicist in the Space Exploration Sector. Co-authors of the paper include Megan Bruck Syal, David Dearborn, Robert Managan, Michael Owen and Cody Raskin.

The results highlighted in the paper are reassuring: for all five asteroid orbits considered, carrying out the disruption just two months before the Earth impact date was able to reduce the fraction of impacting mass by factor of 1,000 or more (99.9 percent of the mass misses Earth). For a larger asteroid, the dispersal would be less robust, but even dispersal velocities reduced by an order of magnitude would result in 99 percent of the mass missing Earth, if disruption is staged at least six months ahead of the impact date.

“One of the challenges in assessing disruption is that you need to model all of the fragment orbits, which is generally far more complicated than modeling a simple deflection,” King said. “Nevertheless, we need to try to tackle these challenges if we want to assess disruption as a possible strategy.”

King said the principal finding of the work was that nuclear disruption is a very effective defense of last resort. “We focused on studying ‘late’ disruptions, meaning that the impacting body is broken apart shortly before it impacts,” he said. “When you have plenty of time — typically decade-long timescales — it is generally preferred that kinetic impactors are used to deflect the impacting body.”

Kinetic impactors have many advantages: for one, the technique is well-known and is being tested on real missions, such as the DART mission, and is capable of handling a wide range of possible threats if you have enough time. However, they do have some limitations, so it is important that if an actual emergency does arise that multiple options are available to deal with a threat, including some ways that can handle pretty short warning times.

Owen said this paper is critically important for understanding the consequences and requirements for disrupting a hazardous asteroid approaching Earth. Owen wrote the software, called Spheral, that was used to model the nuclear disruption of the original asteroid, following the detailed physics of shocking and breaking up the original rocky asteroid and capturing the properties of the resulting fragments. From there, the team used Spheral to follow the gravitational evolution of the fragment cloud, accounting for the effects of the fragments on one another as well as the gravitational influence of the sun and planets.

“If we spotted a hazardous object destined to strike the Earth too late to safely divert it, our best remaining option would be to break it up so thoroughly the resulting fragments would largely miss the Earth,” he said. “This is a complicated orbital question though — if you break up an asteroid into pieces, the resulting cloud of fragments will each pursue their own path around the sun, interacting with each other and the planets gravitationally. That cloud will tend to stretch out into a curved stream of fragments around the original path the asteroid was on. How quickly those pieces spread out (combined with how long until the cloud crosses Earth's path) tells us how many will strike the Earth.”

“Our group continues to refine our modeling approaches for nuclear deflection and disruption, including ongoing improvements to X-ray energy deposition modeling, which sets the initial blowoff and shock conditions for a nuclear disruption problem,” she said. “This latest paper is an important step in demonstrating how our modern multiphysics tools can be used to simulate this problem over multiple relevant physics regimes and timescales.”