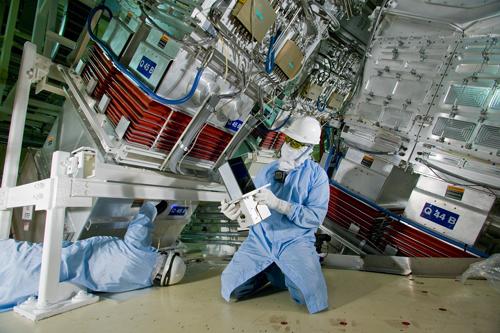 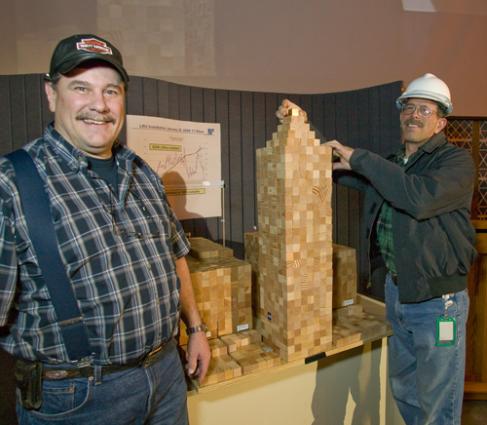 to view a QuickTime video of the final LRU being installed, and the celebration that followed.

Last of 6,206 modules installed in NIF

The operation took only about half an hour. And when it was finished, NIF project construction had finally come to an end.

The camera was the last of NIF’s 6,206 various opto-mechanical and controls system modules called "line replaceable units" or LRUs to be installed. The first LRU, a flashlamp, was installed on Sept. 26, 2001.

The SIDE camera is one of 48 such units, which monitor optical units in an area where the laser beams transition from an argon gas to a vacuum environment inside the target chamber.

Ed Moses, principal associate director for NIF said: "This is one of the most significant events in the project’s history, and another milestone on the path to project completion."

The entire NIF staff celebrated the occasion a few hours later, with the ceremonial installation of a small wooden cube atop a model of NIF — the 6,206th cube to be glued into place. Each cube individually represented a NIF LRU. The cubes were originally used to demonstrate the scale and complexity of designing, procuring, assembling and commissioning the NIF.

NIF’s schedule calls for project construction to be completed by March 31. Control room technicians have been conducting tests of the laser beams during evening and overnight shifts. Of NIF’s full complement of 192 beams, 111 have now been fired into the center of the 10-meter diameter target chamber, achieving performance levels exceeding those required by the project completion criteria.

In the next few months, the NIF project will be complete, and scientific experiments to demonstrate ignition and to provide the platform for conducting high-energy density experiments in support of the stockpile stewardship program, fusion energy and frontier science will commence.

Moses told the NIF staff at the LRU "topping" celebration. "It’s the most precise laser of its kind that’s ever been built."

He said the construction of NIF is "an amazing thing to be proud of — and what we’re about to do with it will even be better."

The official NIF dedication is scheduled for May 29.