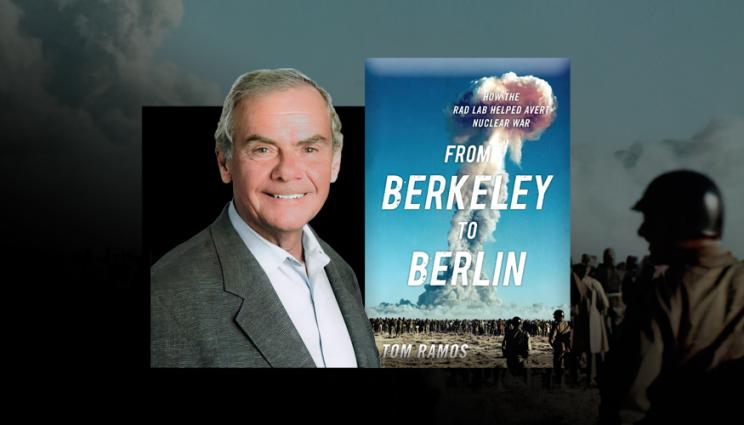 Physicist Tom Ramos has had several roles for the past 40 years at Lawrence Livermore National Laboratory. He served as a member of the nuclear team that developed the X-ray laser for President Reagan’s Strategic Defense Initiative, he supported United States arms control negotiations for START, and over a span of seventeen years he created and ran a program for the Department of Defense called CAPS.

His most recent venture was writing a book titled “From Berkeley to Berlin,” which focuses on how the United States had the ability to stand up to Nikita Khrushchev, former leader of the Soviet Union, and his attempts to expand Soviet influence around the globe. The book brings individuals alive, especially those at Livermore, who played important roles in making the country safe during the Cold War.

“The fact that we escaped, for 70 years, from having a nuclear exchange with the Soviet Union was not an accident,” Ramos said. “The history I write about holds lessons for us that are applicable even today. A Cold War strategic deterrent plan that came about, largely at Livermore, worked. It was tested almost immediately by the Soviets and thanks to our having a leader like John F. Kennedy, we were able to make them think twice before they committed a serious act of war, like invading Western Europe.”

As Ramos was reflecting on the Cold War, he said what happened in Livermore back in the 1950s makes for an epic heroic tale.

“How we were able to design, develop and create a preponderant nuclear deterrent force required a lot of hard work by some extremely intelligent scientists and engineers here at the Laboratory. There are worthwhile lessons we could learn from the creation of the Laboratory,” he said.

Ramos said it would be difficult to exaggerate how important the Lab was to the nation’s security in the first 10 years after its creation.

“As part of my story I tried to explain this by using our development of a warhead for a fleet ballistic missile as an example,” he said. “There’s a reason why Mike May and Jim Frank proudly hold up a 'Polaris banner' in the large posters displayed in Buildings 111 and 132. On March 23, 1962, President Kennedy admitted before a crowd of 85,000 spectators just how much the country owed to the Laboratory.”

Genesis of the book

The genesis of the book began in 2012 when Bruce Goodwin, former principal director of the Lab’s Weapons and Complex Integration, asked Ramos to write a history of LLNL’s nuclear weapons program and give lectures to the directorate and to the Lab on how the Lab had done research in the past.

“As a courtesy, I had presented Harold Brown, our former director and secretary of Defense under President Jimmy Carter, with a classified draft of a document I had written on the history of our nuclear weapons program,” Ramos explained.

Brown told Ramos that he had gotten the facts correct but needed to write that history as an unclassified book. Ramos thanked Brown for the kind words and thought little more about it. The next day back at the Laboratory, then-Laboratory Director Parney Albright asked Ramos when he was going to write that unclassified history.

“Obviously these guys talked to one another,” Ramos said, adding that afterward he spoke with Charlie Verdon, Goodwin’s successor, who urged him to write the unclassified book. After further discussions with the Lab's Office of General Counsel, Ramos got started.

To make the book an interesting read, Ramos felt he had to make it a story with a hero accomplishing a worthy goal against people and other things that acted as obstacles.

“It became clear to me early on that the hero was Ernest Lawrence,” Ramos said. “More than anyone else, he was responsible for creating our Laboratory."

Later in his research, Ramos realized that Lawrence’s principal protégés, York, Brown, Foster and May, picked up Lawrence’s role after he had died in 1958. Ramos described this as a passing of a baton. He calls those second-generation leaders the “upstarts.”

“It wasn’t an accident that those upstarts were in leadership positions,” Ramos said. “Lawrence purposely selected them after observing how well they performed during their stints at the Rad Lab in Berkeley. That was a major legacy of Lawrence: how his leadership and management skills helped make the Laboratory a phenomenal place to work and to accomplish things.”

It was also after a few years of research that Ramos realized how important others were to our Laboratory, including Edward Teller, John von Neumann, John Wheeler, David Griggs and Alfred Loomis.

Ramos said the book provides lessons about the world today.

“That we were able to provide President Kennedy with a credible nuclear deterrent of preponderant strength and agility was not an accident. Certainly we ought to be capable of performing that service to the nation today,” Ramos said.

Ramos said building that strategic deterrent force was the product of years of hard work and creative thought to give the country what it needed during what became a nuclear crisis.

“Remember, the Berlin Crisis of 1961, which most Americans don’t even realize occurred, was more serious to world peace than the Cuban missile crisis of 1962. Many of us don’t know about it precisely because it was that serious,” he said. “The challenges we face today are just as serious in my opinion, as the challenges our forebears faced when the Lab was created.”