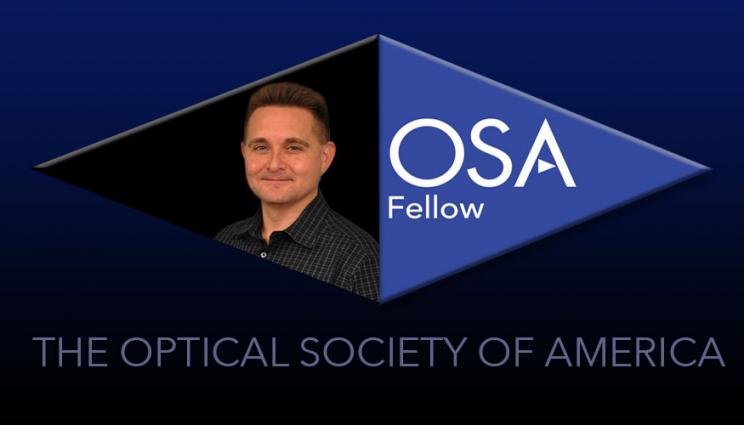 Lawrence Livermore researcher John Heebner has been elected a fellow of The Optical Society of America.

Lawrence Livermore National Laboratory (LLNL) researcher John Heebner has been elected a fellow of The Optical Society of America (OSA). Heebner was cited for his "numerous innovations, achievements and technical leadership in high-energy laser systems and integrated optics including nonlinear optical microresonators and ultrafast light deflectors."

Heebner leads the Ultrafast Optical and Electronics Systems Group, whose members support multiple Lab programs and are pioneering diagnostic techniques bridging the gap between ultrafast optics (subpicosecond) and high-bandwidth electronics (>10 GHz). He came to LLNL in 2003 after completing his Ph.D. in optics, where his doctoral work demonstrated light-by-light switching on a chip enhanced by microresonators, later published as a textbook.

After coming to LLNL, Heebner developed the chipscale SLIDER deflector that set a world record for the fastest deflection of a light beam. Heebner also served as lead scientist for the front end of the National Ignition Facility (NIF) laser system. He later developed a system of 48 optically addressable, programmable spatial shapers that shape the NIF laser beams to safely optimize the extraction of energy from the main amplifiers. Most recently, he designed the architecture for the high-contrast front end of the ARC Petawatt upgrade. He has been awarded four R&D 100 awards, seven patents and authored more than 70 technical articles.

"It’s truly an honor to be elected a fellow of the Optical Society of America. It’s humbling to be included among scientists and engineers I’ve looked up to as role models," Heebner said. "I also am lucky to have worked with amazing colleagues and am thankful that LLNL gave me the opportunities to realize accomplishments that would not have otherwise been possible."

Founded in 1916, OSA is the leading professional association in optics and photonics, home to accomplished science, engineering and business leaders from all over the world. Fellow membership in OSA is limited to no more than 10 percent of the membership and is reserved for members who have served with distinction in the advancement of optics and photonics.