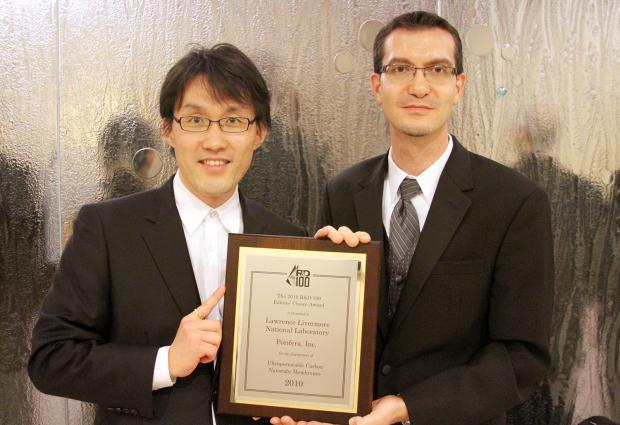 Hyung Gyu Park and Francesco Fornasiero won an Editors Award for their work on carbon nanotubes. Photo by Bob Hirschfeld

For the second consecutive year, LLNL has won a coveted Editors Award at the annual R&D100 Awards presentation, sponsored by R&D Magazine. This year, the honor went to Hyung Gyu Park and Francesco Fornasiero, for their work developing nanostructured membranes for water purification. The technology has been licensed to Porifera, Inc. of Hayward. Other members of the team who were unable to attend the award ceremony include Olgica Bakajin, Jason Holt, Sangil Kim and Aleksandr Noy.

Only three Editors Awards are given out of the 100 awards.

This is the second year in a row that that Lab has won an Editors Award. In 2009, the award went to the team working on the artificial retina.