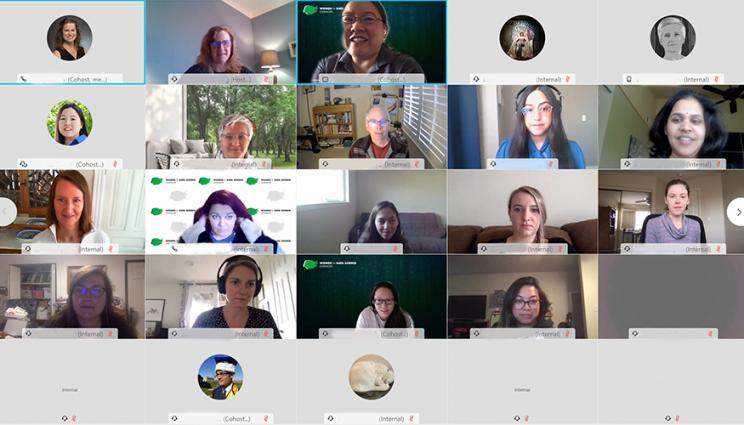 The Lab’s first-ever virtual WiDS gathering attracted dozens of LLNL data scientists as well as some from outside the Lab, and featured speakers, a career panel and breakout sessions where women could network and discuss mentoring and career advancement.

“If some of you have experienced being literally the only woman at the table, or the only woman on a panel, I’m sure you can agree it’s quite special to have an event centered on women in data science,” LLNL Bioinformatics Group Leader and WiDS Livermore Ambassador Marisa Torres told attendees. “We’re here to celebrate a lot of accomplishments.”

Center for Applied Scientific Computing (CASC) Deputy Division Leader Ana Kupresanin addressed morning attendees, discussing her path from a high school student in her home country of Croatia to becoming a statistician at LLNL, where she focuses on the uncertainty quantification of predictive models for the weapons program. Advances in machine learning (ML) and artificial intelligence (AI) are helping accelerate scientific discovery, and CASC researchers work with the scientific community to build a firm theoretical foundation for ML and AI, with a particular emphasis on the Lab’s broad mission space, she said.

“The nature of scientific computing is changing with the rapid rise of data science and fundamental physical limitations imposing challenges on computer hardware,” Kupresanin said. “This not only presents new challenges, but offers opportunities in creating new algorithms and developing improved workflows that will more tightly couple experiment, simulation and theory.”

Kupresanin, who is heavily involved with academia through her role with the Predictive Science Academic Alliance Program, and with the University of California through her work as a Data Science Institute (DSI) council member, said the broader adoption of ML is creating greater demand for statisticians and data scientists, positions that could be filled by women currently seeking their degrees.

“These students are bold, they’re not afraid to ask questions and try new methods, and they think outside the box,” Kupresanin said. “This new generation is really excited about what they can do to change the world and they have enormous energy.”

For the event’s career panel, LLNL data scientists Brenda Ng, Mary Silva, Juanita Ordóñez and Hiranmayi Ranganathan discussed balancing work and family obligations, imposter syndrome, preventing burnout and other challenges unique to women in data science, a field in which women make up only about 15 percent of the workforce.

“I feel I have to prove I’m five times better to get a seat at the table,” said Ng, who said she faced biases despite her Ivy League background. “I always have to be my own advocate. No matter how hard you work you still have to put yourself out there. The reality is people in power will always want to promote people who are like them and we need to change that.”

Ng acknowledged the recent hiring of LLNL’s first woman director, Kim Budil, as a step in the right direction and encouraged attendees to not be afraid to pursue their dreams.

“I’m a really competitive person, so if some boy tells me he can do something better, I’ll be like, ‘I’ll show you I can do it better than you and reduce you to tears,’ " Ng said laughing. “With all the opportunities in data science, don’t ever think about it as a boy’s thing. If you think it, you’re already putting yourself at a disadvantage. Always think you are super and be that super person you want to be.”

Ranganathan, who had a baby during the COVID-19 pandemic and has managed her work responsibilities while also guiding her 4-year-old through online school, talked about the importance of maintaining a healthy work-life balance.

“My advice is to enjoy what you do,” Ranganathan said. “As long as you find something to do that you enjoy, you’ll do it well. Set small goals and reward yourself when you achieve them. When you reward yourself, you feel like you’ve accomplished something, and it encourages you and makes you want to get up and do the same thing over again the next day. And it’s OK if you don’t finish something in the stipulated time as long as you’re at it and you know you’ve given your best.”

LLNL data scientist Amar Saini, a former DSI summer intern from the University of California, Merced, moderated the panel. Panelists stressed the importance of finding women mentors, attending conferences, getting the right training and taking advantage of educational and internship opportunities such as those offered through the Lab's DSI.

“People see data science as a male-dominated field. That might have been true 20 years ago, but there’s a lot more women working in it now, especially at the Lab,” said LLNL data scientist Mary Silva, who recently graduated from the University of California, Santa Cruz and works on spatial modeling and active learning development for two Lab projects related to COVID-19. “I think that misconception is something that scares a lot of (women) off. It can definitely be intimidating when your computer science classes are mostly men. But as I got more involved, I saw a lot of women doing really great things and it really inspired me.”

“If I had been introduced to it in high school, I would’ve been really into it and I feel like I would’ve been farther in life,” Ordóñez said. “When I was at my internship and university, I noticed a lot of people that were into computer science already had parents who came from that career path. And when you see the first-generation students, they’re lost because they don’t know what to do. Introducing computer science very early on to both guys and girls will always be positive because you’re introducing more ideas and perspectives. And everyone is welcome, not just girls.”

Nisha Mulakken, a bioinformaticist working on the Lawrence Livermore Microbial Detection Array, served as the event’s closing speaker. Mulakken, who is studying the impact of microbiomes on COVID-19 severity among other pursuits, shared tips for mentoring young women and urged viewers to seek guidance through DSI and the Lab’s Data Science Summer Institute, which she co-directs.

“I would not be where I am without the internships that inspired me to follow this research path, not to mention the mentors who encouraged me along the way,” Mulakken said. I’m really excited to be able to bring up the next generation of Lab data scientists. It’s important to me to give back.”

Livermore was one of more than 200 WiDS events held in more than 60 countries in conjunction with the conference, the first-ever virtual WiDS spanning an entire 24 hours. The conference featured panels and talks by women data scientists from all over the world, including keynote addresses by UC Berkeley professor Shafi Goldwasser on the impact of cryptography on machine learning research and by Google principal scientist Fernanda Viégas on data visualization in science and art.

For more on the Data Science Institute, visit the web.