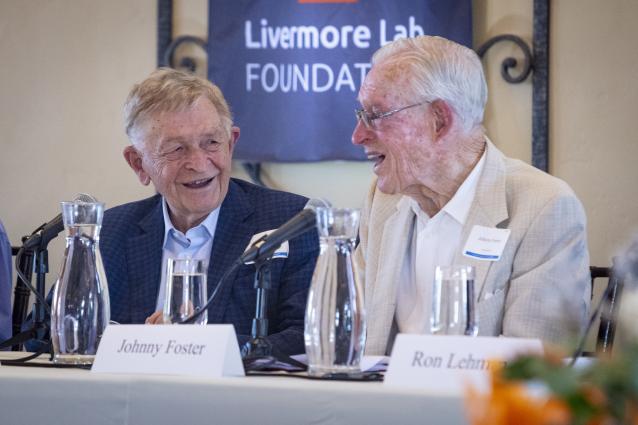 All nine living Lawrence Livermore National Laboratory directors including John Foster Jr. (right) and John Nuckolls (left) gathered for a historic panel discussion on Sept. 8 to celebrate the Laboratory’s upcoming 70th anniversary, share stories and discuss their vision for the Laboratory in the coming years.

On a historic occasion in the Livermore wine country, the nine living Lawrence Livermore National Laboratory (LLNL) directors gathered on Sept. 8 to mark the Laboratory’s 70th anniversary, share stories and discuss their vision for the Lab in the coming years.

More than 200 people were on hand for the event, including many current and retired LLNL employees, dignitaries and local elected officials. Among the guests of honor was Department of Energy Under Secretary of Nuclear Security and Administrator for the National Nuclear Security Administration Jill Hruby, who opened the event by stressing the importance of preserving the Lab’s legacy as a site for “big ideas.”

“This Lab is a special place,” Hruby said. “We think that these labs will always be here, but yet they’ve (only) been here about the same time as some of us. We have to take care of them — that’s a responsibility that we all share.”

The distinguished panel shared anecdotes from LLNL’s past and discussed challenges facing the Lab in the 21st century, particularly in maintaining operational excellence in an evolving world and attracting and retaining employees amid a changing workplace environment and shifting demographics. With Counselor to the Laboratory Director Ron Lehman serving as moderator, the directors spoke in sequential order, their talks centered around the Lab’s 70th anniversary theme, “Making the Impossible Possible.”

Foster, who celebrates his 100th birthday on Sept. 18, related his experience working with LLNL founder Ernest O. Lawrence in the 1950s, and guiding the Lab through its formative years in the early 1960s. Foster spoke of the characteristics that made Lawrence great — his vision, persuasion and leadership — all qualities LLNL will need in order to continue as the “big ideas” Lab, he explained.

“As we celebrate the Lab’s 70th anniversary, I think it’s important to remember the Lab’s roots, the important core mission and the man who made it happen and shaped the next 70 years and beyond,” Foster said.

Lab Director from 1965-1971, May called LLNL “the greatest place I ever worked,” and advised employees to never take the Lab’s fundamental mission, its strong underlying research programs and experimental capabilities for granted.

“I’m very impressed with what I know of today’s employees and I’ll think we’ll continue on,” May said.

Nuckolls, introduced as the “godfather of laser inertial confinement fusion,” reminisced about the birth and growth of the laser fusion program while working for Foster and into the 1970s. He expressed optimism for the future of fusion in light of the recent history-making 1.3 megajoule shot at the National Ignition Facility, which brought the world to the threshold of ignition.

“I haven’t been able to forget the [theme] for this meeting since I read it, because I think that’s what this Laboratory is all about; it’s what our neighbors across the street at Sandia Livermore are all about,” Nuckolls said. “Working together, we have accomplished a lot. Now the question for all of us is, what are the limits of making the impossible possible?”

The 1980s and the “remission” of the Cold War saw the end of nuclear testing and the birth of the NNSA’s Stockpile Stewardship Program, a science-based approach to certifying the nation’s nuclear stockpile. Tarter, who called himself a “quasi-historian,” took attendees on a journey through the history of the nuclear deterrent and the Lab’s evolution as it added new capabilities including supercomputing and biodefense. He also expressed the need for LLNL to continue adapting to shifting technological and geopolitical sands to remain competitive.

“We’ve had good budgets in most cases, we survived the transition from public to private management and ownership, but what I haven’t seen in these last 20 years is anything like those revolutions of the laser program, SDI [the Strategic Defense Initiative], the computing revolution and biodefense,” Tarter said. “We have achievements, we have accomplishments, but what we haven’t seen is the introduction of — not just programs — but the introduction of a new culture, like taking on something ‘out-of-the-box.’”

In his pre-recorded message, Anastasio said that while LLNL can be proud of its many achievements over the years, it “cannot rest on its laurels,” and must be prepared to face modern challenges, including new nuclear threats, climate change, pandemics and societal mistrust in science.

“In facing the future, we must not forget that the workforce is the essence of the Laboratory,” Anastasio said. “The sample of employees that I’ve had the chance to meet and interact with in recent years have the qualities that give me confidence in the future that the Lawrence Livermore National Laboratory will continue to show the aspirations, passion, excellence and commitment to meet these challenges, and many more, to deliver for the country.”

Miller, who guided the Laboratory from 2006-2011, overseeing the transition of management by the University of California to a managing consortium, said he saw the move from a public to private institution as a “battle for the soul of the Laboratory.” The biggest challenges LLNL will face going forward will be preserving its values and heritage, remaining motivated by public service — not profit — and keeping pace with accelerating technological changes and the confluence of existential threats facing humanity, including nuclear aggression, climate change and artificial intelligence, Miller said.

“The fact of the matter is that the speed of relevance of this Laboratory and the entire national security enterprise is incompatible with the speed of relevance of what’s happening,” Miller said. “We have a huge challenge in front of us, and I personally believe that this Laboratory can contribute in major ways to solutions to these problems for the betterment of the country.”

Albright, who led LLNL from 2011-2014, said the Lab should think about redefining its goals after stockpile modernization efforts are completed, which could require pursuing competencies outside the current scope. Maintaining excellence, Albright said, will require attracting new talent and investments from varied sources while leveraging the Lab’s unique ability to “take innovation all the way through the chain.”

“The future is there, but you have to decide what are the missions you’re going to pursue, then you’ve got to really commit to it, and that means getting the sponsors, getting the investments and getting the people,” Albright said.

The urgent need for diversifying and to continue growing in emergent technologies was echoed by Goldstein, who said “some genuine changes are in store” for the Lab. In the future, the Lab will need to build off its successes in high performance computing, additive manufacturing, fusion and national security to attract young talent, while working to improve diversity through outreach, philanthropy and other types of external engagement.

“The Lab has been singularly good at non-linear thinking over the years; this is something that has been a strong basis for us,” Goldstein said. “The Lab has done this over and over again … We’re in a very good position to take advantage of this moment and look to the future.”

Goldstein’s successor, current director Budil, said LLNL is experiencing a demographic shift, with many employees retiring and 40 percent of the workforce having been at the Lab for less than five years. While the core mission of national security will “set the typography” for the Lab’s future, Budil said LLNL will be challenged to “move with great speed” to address important problems and attract and retain talent in a highly competitive job market. She said the Lab will be required to imbue a new generation of scientists and engineers with a “sense of possibility, technical ambition and of urgency” to spark “revolutions” in areas such as climate, bio-chem and drug discovery.

“Science and technology is not just something we enjoy doing, it’s a competitive advantage for the United States and it’s a national security imperative,” Budil said. “Working across that full space with this immense capability base that our core program has built for us is really an exciting opportunity for the Lab.”

As the Lab’s 70th anniversary approaches, Budil explained she and senior management have determined four focus areas where the Lab is specially positioned to contribute to the nation: transforming the nuclear stockpile, resilience to manmade and natural biothreats, addressing climate change through technologies such as CO2 removal and developing an integrated deterrence against incipient threats such as hypersonic and directed energy weapons.

“I’m really excited about the future,” Budil said. “I think I have the best job in the world ... I get the challenge of leading us forward with an incredible great group of people. What’s always been true at the Lab is that extraordinary people come and join our team, and if you give them the opportunity and the tools, they can do some amazing things.”

After a brief question and answer session, Livermore Lab Foundation Chair Dona Crawford, former associate director of Computation (now Computing) at LLNL, unveiled plans for a bench to be placed at the University of California Livermore Collaboration Center (formerly Hertz Hall) in honor of the 70th anniversary, bearing the names of all the Lab’s directors.

To view the panel discussion, visit the web.