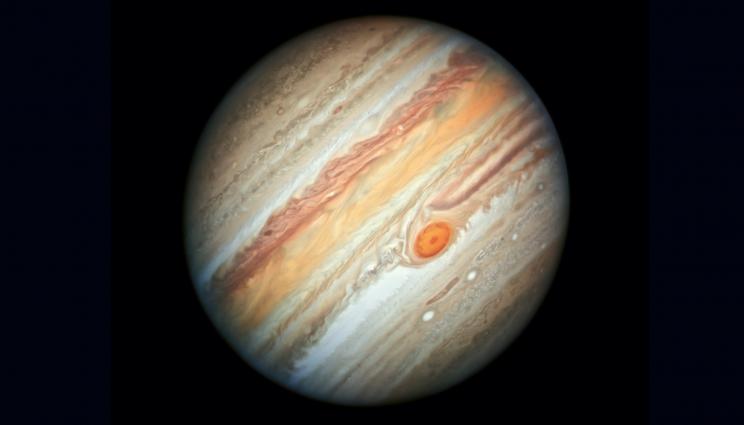 New research by LLNL shows that Jupiter’s stripes, caused by the planet’s zonal winds, only descend to 3,000 kilometers in the atmosphere. Image courtesy of NASA

There’s a reason why Jupiter’s stripes are only skin deep.

It turns out that the planet’s zonal winds -- the alternating east-west jet streams seen in photographs as colorful stripes -- only descend to 3,000 kilometers in the atmosphere.

Magnetic fields can make fluids that conduct electricity (like Jupiter’s atmosphere) behave more like honey than water. Deeper into the planet, where the pressure is higher, the atmosphere becomes more conducting and is more strongly influenced by the planetary magnetic field. It’s also the same place where the stripes stop.

"The magnetically enhanced viscosity could be strong enough to be the culprit that terminates the winds at depths below 3,000 km," said Jeff Parker, Lawrence Livermore National Laboratory physicist and co-author of a research paper appearing in the Aug. 27 edition of Physical Review Fluids.

The team looked to NASA's Juno mission to Jupiter that revealed the zonal winds descend to a depth about 4 percent of Jupiter's radius.

"An electrically conducting, flowing fluid will bend or distort a magnetic field. What we showed is that the distortion of the magnetic field reacts back on the fluid in a way that effectively makes the fluid more viscous," Parker said.

Parker said this effect could explain how the magnetic field can slow down and even stop the winds deeper into Jupiter’s atmosphere.

The team, which also included Navid Constantinou of Australian National University, said the next step would be to explore the magnetic viscosity effect in 3D simulations, which would allow more detailed and realistic comparisons with actual data from Jupiter.