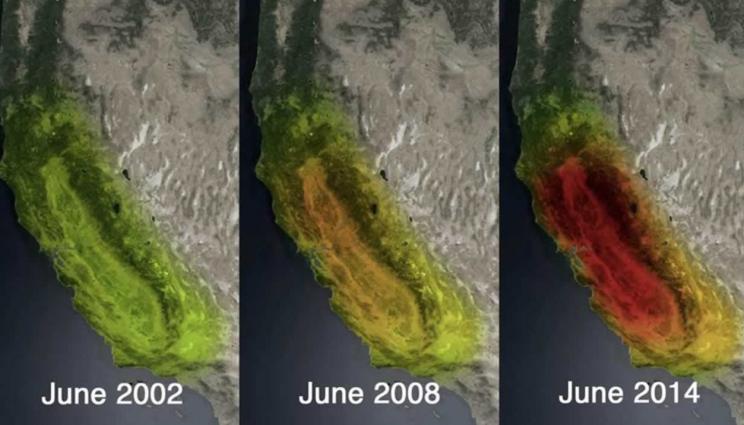 NASA satellite images show the dramatic loss of water storage in California during its most recent drought.

Observations and climate reconstructions using data from tree rings confirm that human activity was affecting the worldwide drought risk as far back as the early 20th century.

New research from NASA Goddard Institute for Space Studies (GISS), Lawrence Livermore National Laboratory (LLNL) and Columbia University shows that greenhouse gas emissions in the first half of the century (1900-1949) significantly affected temperature and rainfall and caused large hydrological shifts over land. The research appears in the May 1 edition of the journal Nature.

The study compared real-world data with climate models, which predicted that human influences could be seen early in the 1900s and would increase. Clear evidence of a human "fingerprint" — a global pattern of regional drying and wetting characteristics of the climate response to greenhouse gases — emerged within the first half of the last century.

The team said the study is the first to provide historical evidence connecting human-generated greenhouse gas emissions and the changes in drought at near-global scales, lending credibility to forward-looking models that predict such a connection. These models also project that humans will play an even bigger role in the location and severity of future droughts, the team warned.

The team used a drought indicator, the Palmer Drought Severity Index, estimated from weather data such as wind speed and rainfall. They also used drought atlases: maps of where and when droughts happened throughout history, calculated from tree rings.

Tree ring records provide snapshots of Earth's past climate and can be used to reconstruct how arid the climate was over the summer months, during the active growing season. Over the last several decades, large networks of these tree-ring records have been used to produce "drought atlases" of North America, Europe and the Mediterranean, Mexico, monsoon Asia and Australia–New Zealand.

"These records go back centuries," said lead author Kate Marvel, an associate research scientist at GISS and Columbia University, and a former LLNL postdoctoral fellow. "We have a comprehensive picture of global drought conditions that stretch back way into history…and they are amazingly high quality."

Drought atlases provide a comprehensive picture of regional soil moisture that dates back centuries. The drought atlases are used to estimate real-world drought variability, validate climate models, understand the climate context of current and historical events and identify past megadroughts.

"Combining many regions into a global drought atlas meant there was a stronger signal if droughts happened in several places simultaneously," said Ben Cook of GISS, who co-led the study with Marvel.

The team used climate models that include natural variables (such as volcanoes and solar flares) as well as man-made changes (ozone depletion, land-use change, aerosols and greenhouse gases).

"We relied on the fact that each influence on the climate system — such as human-caused changes in greenhouse gases — has a unique spatial fingerprint that differs from the regional pattern generated from climate noise alone, in absence of greenhouse gas emissions or air pollution, as occurred before the Industrial Revolution," said LLNL climate scientist Celine Bonfils, a co-author of the study. "This understanding is what informs modern fingerprint detection and attribution methods, including the one developed at LLNL and used in this study."

"What made this study innovative was seeing the big picture of global drought," Marvel said. Individual regions can have significant natural variability, making it difficult to tell whether a drying trend is due to human activity. Combined together, "a clearer picture emerges," she said. "It’s climate detective work, like an actual fingerprint at a crime scene."

The team found that droughts were predominantly tied to the large increase in greenhouse gas concentrations at the end of the 20th century. The story changed briefly between 1950 and 1975, as the atmosphere became cooler and wetter. The team believes this was due to vast quantities of industrial smoke, soot, sulfur dioxide and other particles emitted before the passage of air quality legislation. Aerosols are harder to model than greenhouse gases, however, and the team cautioned that further research is necessary to establish a definite link.

After 1975, as pollution declined, global drought patterns began to trend back toward the fingerprint. It does not yet match closely enough for the team to say statistically that the signal has reappeared, but they agree that the data trends in that direction.

"By demonstrating a human fingerprint on droughts in the past, this study provides evidence that human activities will continue to influence droughts in the future, and we’re already seeing the influence today," said LLNL climate scientist Paul Durack, another co-author of the study.

The LLNL portion of the work was funded by the U.S. Department of Energy Biological and Environmental Research Grant, Office of Science, Program for Regional and Global Model Analysis.