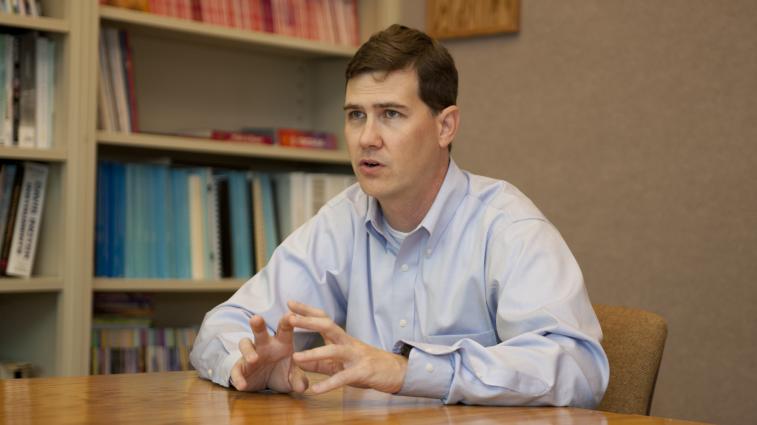 A former researcher in the Lab's Forensic Science Center (FSC) has returned to the Laboratory to lead the center.

Brad Hart, who worked as a staff scientist at the FSC from 2004 to 2009, has been named the center's director and started his new position in early October.

He returns to LLNL after working for more than two years at the Washington, D.C.-based Defense Intelligence Agency, where he served as a division chief in the Office of Forensic Intelligence.

"I like the multi-disciplinary science and the integrating role that the Lab's Forensic Science Center has undertaken for national security," Hart said. "The application of new science and technology to real-world operational needs is something that I'm excited about doing here."

Hart indicated that his return to the FSC has gone well.

"Many of the same good people are here and some of the programs that were starting when I left are maturing. The FSC has a long history of working well with local, state and federal law enforcement, the intelligence community and many other government agencies focused on national security," he said.

As he leads the FSC, Hart stated that one of his priorities will be to bolster the center's relationships with these agencies and to develop new ties with other organizations.

One key function of the Lab's FSC has been that it has served, in Hart's view, as a focal point for transitioning basic science to applications in the field of forensics.

As an example of basic science developed by the FSC that has been applied to forensics, Hart cited an explosives detector called the Easy Livermore Inspection Test for Explosives (ELITE) that is highly sensitive to more than 30 different explosives, making it one of the most effective detection systems available.

A Florida-based company, Field Forensics, has sold tens of thousands of ELITE units for use by law enforcement and by the U.S. military in places such as Iraq and Afghanistan.

Many of the FSC's efforts in recent years have centered on developing the methods and data required to support forensic exploitation of information, according to Hart.

"For the future, the approach that should bring in new people and more science is to broaden the scope of the technical disciplines undertaken by the FSC."

"Brad's extensive knowledge and experience in weapons of mass destruction-related forensic science, as well as field deployment and real-world operational support and his close ties to the Department of Defense, Department of Homeland Security and FBI will ensure that the high quality work product, rigorous analytic protocols, and excellent national reputation of the FSC will be maintained and strengthened."

While at the Defense Intelligence Agency, Hart was responsible for the planning and oversight of worldwide chemical-biological-radiological-nuclear-explosive/biometric exploitation operations. He developed, established and oversaw operation of multiple forensic exploitation laboratories both inside and outside of the continental United States.

Hart earned his Ph.D. in chemistry from the University of California, Irvine and came to LLNL in 2001 as a post-doctoral researcher.

Founded in 1991, the Laboratory's FSC is a recognized national capability in the areas of chemical, nuclear and biological forensic analyses with applications to law enforcement, national security, intelligence and defense. About 15 researchers, mostly analytical chemists and nuclear chemists, work for the FSC.

Through the years, the FSC has conducted or assisted investigations in a number of high-profile cases, such as the Unabomber, the anthrax cases, the Fremont bomber, and the Efren Saldivar "Angel of Death" case.

Additionally, the FSC has provided support to the intelligence community and serves as one of two United States Chemical Weapons Convention laboratories that is internationally certified for identifying chemical-warfare agents.