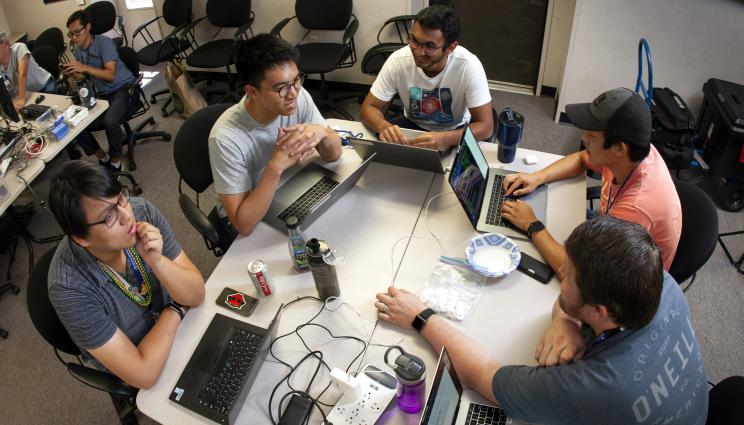 Although Hackathon participants aren’t required to stay overnight and are strongly encouraged to get a good night’s sleep, Saini and his team burned the midnight oil, toiling over a machine learning project involving training an algorithm on a large dataset of car imagery to both recognize the cars and allow a user to quickly change the cars’ colors in a picture or video, without altering the background or the cars’ structures.

The team began their day in the Lab’s High Performance Computing Innovation Center (HPCIC) on Aug. 1 along with dozens of fellow hackers, working until the building closed at midnight. Saini and teammate Luis Gutierrez then moved operations to a local supermarket and, finding no work areas there, to a coffee shop until about 2 a.m. With their laptop batteries dying, they went off in search of power outlets, first at the Livermore Casino and then the Lab’s West Cafeteria, which they discovered was open 24 hours. They returned to the HPCIC at around 6 a.m., where they continued toy type away feverishly on their laptops, finishing their slides and videos just minutes before the presentations started.

"We learned a lot about the kind of hardware and software we use at the labs, specifically about the cluster that we use for deep learning, as me and Luis are both new hires learning on-the-go," Saini said. "This hackathon definitely put our skills to the test."

Saini was one of more than 100 people who signed up for the Summer Hackathon, about a quarter of whom were Summer Scholar students. Participants selected their projects from about 50 options that ran the gamut from programmatic work to experimental tinkering, working either individually or in teams. Organizers do allow participants to spend all night in Bldg. 453 if they want to, and although most did leave in the late evening to get some shut-eye, some, like Saini and Gutierrez, chose to charge right on through, pausing only for coffee or bathroom breaks and a late dinner.

The hackathon’s focused environment allows Lab employees and student interns to make unique breakthroughs and work on projects they either haven’t had time for or have been of low priority in their day jobs, organizers said. It’s an opportunity that developers often call "scratching the itch," said Geoff Cleary, a software development team lead in Livermore Computing and hackathon co-organizer.

"This is a great place to try out new technologies, so people are trying out new techniques and frameworks and languages that don’t enjoy popular use here on site yet but might be based on the successes and failures they see today," Cleary said. "There’s something about being in this space, away from the distractions of email, meetings and (chat) interruptions that really engenders a certain unique focus on the project at hand. There’s also a freewheeling nature of trying new things and attacking things from multiple angles…During an event like this you can turn to it, face it, take care of it and enjoy the benefits of whatever you come up with an ongoing basis."

Hackathon participants also are encouraged to present the results of their projects. The presentations are an opportunity for participants to learn from others’ successes and failures and are the students’ best chance to affect rank-and-file Lab employees with results and new ideas, organizers said.

"I think people learn even more from what didn’t go well," Cleary said. "One of the biggest benefits that comes out of the presentations is it spawns further collaborations down the road."

The Lab’s hackathon events, held three times a year, aren’t just fun and games, according to organizers. They’ve grown to attract buy-in from many Lab organizations and are led by employees in the Computing Directorate. Hackathons have impacted LC’s mission, bleeding into Laboratory Directed Research and Development (LDRD) projects, Idea Days and even programmatic projects, Cleary said. 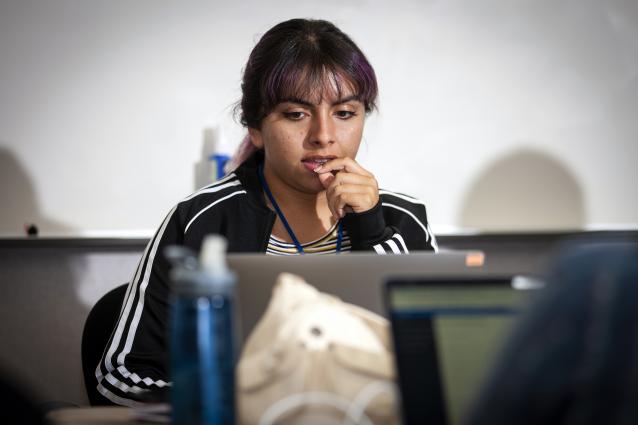 LLNL computer scientist and Division Leader for the High Performance Computer (HPC) Center Becky Springmeyer kicked off this summer’s event by speaking about how it has become a hallmark of the Lab’s commitment to collaboration, highlighting the importance of the event to the Computing Directorate. About one-third of Livermore Computing has participated in past hackathons, Springmeyer said, and not only have most of the Computing divisions participated, but past teams have included engineers and mathematicians from other directorates as well.

"It’s been proven that this is an inspirational activity," Springmeyer said. "It spurs innovation, it increases networking and collaboration, people are very creative. In fact, you get some of the same benefits that you get from sending people away to a conference. They come back renewed, so it was recognized fairly early on that it was something we wanted and needed to support."

"It’s a good recruiting strategy but it’s also good for branding," Laguna said. "It’s a benefit to the Lab because it helps the perception of the Lab, they can go back to their campuses and tell their friends about it. The more we can spread the word that the Lab participates in this sort of culture is a benefit for hiring and retention."

Laguna, who has attended all 21 hackathons in some form or fashion, said the events have seen increasing participation over the years, and have been successful in allowing employees to tap into their creativity, meet new people and see the employees they work with in a different environment. It’s also enhanced employee development in ASQ, particularly regarding team building, he said.

Hackathons are ingrained in Silicon Valley, and many of them are highly competitive. LLNL’s event is a bit more laid back, participants said, with the primary emphasis on learning and trying new things and distilling that learning experience to share it with the larger group. One group of National Ignition Facility (NIF) summer interns worked on a project combining Raspberry Pi mini-computers, machine learning and a streaming camera to identify objects and images using computer vision and image classification techniques. The results would be displayed on an LED screen on the devices.

It was the first time that NIF software engineering interns Mira Welner of UC Davis and her teammate Arvind Ramaswami of Georgia Tech had worked with Raspberry Pis. Welner who described herself as a "code adrenaline junkie," said she’d been to several major league hackathons held on college campuses. where overcaffeinated participants typically stay up all night vying for prizes and tech company swag. She planned to stay up late for LLNL’s Hackathon, but not for the whole 24 hours. 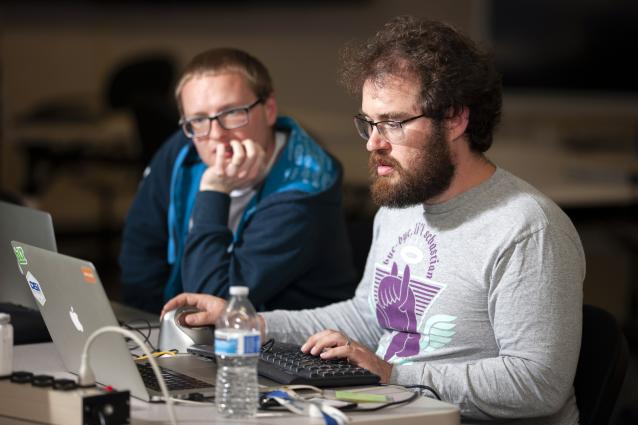 "I’m honestly here for the adrenaline high," she said. "I love hackathons for that reason…Typically there’s a lot of excitement and crunch, and you write some pretty terrible code, but it does what it does. The pinnacle of the Silicon Valley culture is going on all out on something and seeing what you can throw together. Because there’s a time crunch, that increases it, but I think some of my best work has been during these kinds of events."

"In a hackathon there’s not really an obligation to do something, so that really brings out a creative aspect," Ramaswami explained. "You’re open to other ideas and you can zone in on what you’re interested in. I’m here for fun and to explore something new."

The fresh perspectives and influx of novel ideas that percolate throughout the Summer Hackathon benefits not only new interns, but also longtime Lab employees, organizers said.

Jessica Mauvais, a computer scientist in Global Security, has spent more than 20 years at the Lab. A hackathon veteran, Mauvais chose a data analysis project in biochemistry, normally a low priority for her on regular workdays, and an area she has been unable to work on with her current project.

"Most of the time I try to pick some area that I didn’t know before, and just be away from the office for a day to learn something totally new," she said.
Tim Bender, a software developer in Global Security, has attended many hackathons at the Lab, working through the night for the first few of them. He spent this summer’s edition working on an annotation tool for machine learning applications, tied to his day-to-day job, and said the hackathon is a valuable opportunity to try out new ideas.

"During the course of a workday we think of different ideas that we would like to try out for the projects we’re working on, but a lot of the times you’re really focused on having some progress to report for the next status meeting or hitting milestones," Bender said. "Having this day is a good opportunity to explore... It’s good for employee growth and making sure we’re keeping up with the latest technology changes."

Computing at LLNL
Scenes from Our 20th Hackathon
Bytes from the Big Three: Hackathon Veterans Laguna, Lee, and Nissen