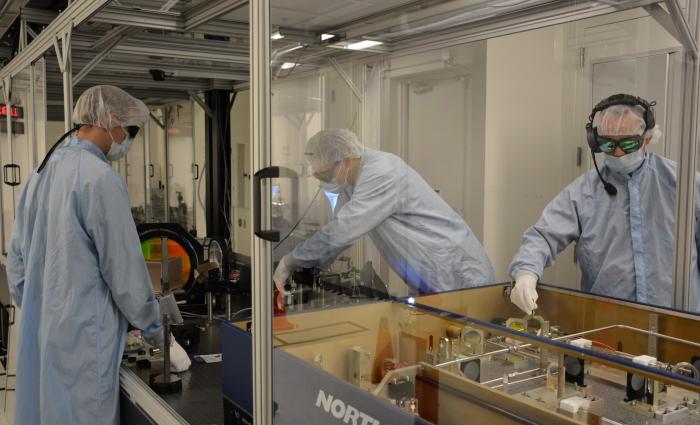 A key component of the High-Repetition-Rate Advanced Petawatt Laser System (HAPLS) under construction at LLNL has been installed and commissioned. The new Gigashot-HE diode-pumped solid-state (DPSS) laser system will be used as a pump source for one of HAPLS’ high-energy titanium-doped sapphire (Ti:Sapphire) amplifier stages.

When commissioned to its full design performance, the HAPLS laser system will be the world’s highest-average-power petawatt (quadrillion-watt) laser system. It will be installed in the European Union’s Extreme Light Infrastructure (ELI) Beamlines high-intensity laser science facility now under construction in the Czech Republic.

HAPLS is designed to generate 30-joule pulses with 30 femtoseconds (quadrillionths of a second) pulse duration each, delivering a peak power of one petawatt at a repetition rate of 10 pulses per second (10 Hz). This very high repetition rate is a major advancement over current petawatt system technologies, which can fire a maximum of once a second.

Supplied by Northrop Grumman Cutting Edge Optronics (CEO), the injection-seeded, diode-pumped Gigashot-HE laser delivers two joules of 532-nanometer (green) laser energy per pulse at a repetition rate of 10 Hz, with each pulse lasting less than 10 billionths of a second.

The Gigashot-HE consists of four PowerPULSE laser modules; one oscillator, one preamplifier and two power amplifiers, utilizing radially side-pumped neodymium-doped yttrium aluminium garnet, or Nd:YAG, rods ranging in diameter from three to 18 millimeters. Each PowerPULSE laser module is pulse-pumped by CEO’s laser diode arrays; the arrays have an expected lifetime of more than 10 billion shots, or more than 30 years of continuous operation at 10 Hz.

The pan-European ELI project is being designed to significantly advance the state of the art for high-power lasers, enabling international scientific research in such areas as medical imaging, particle acceleration, biophysics, chemistry and quantum physics. Generation of high-brightness X rays and acceleration of charged particles are among the uses of its ultrashort, high energy pulses.