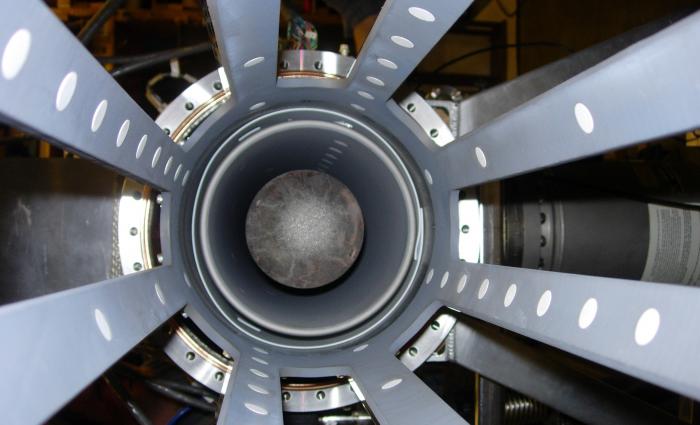 Lawrence Livermore and University of Washington researchers will attempt to create a self-sustained and controlled fusion reaction with a scaled-up version of this "Sheared Flow Stabilized Z-Pinch" device.

Fusion could be 'ZaPped' into reality

With funding from the Department of Energy, Lawrence Livermore National Laboratory (LLNL) and the University of Washington (UW) will work to advance the sheared-flow stabilized Z-pinch concept and assess its potential for scaling to fusion conditions.

Fusion is the same energy that powers the sun and the stars, and scientists have worked for years to create the same power on Earth. The ultimate goal is to get more energy out than it takes to power the system itself. In this project, the researchers will upgrade an existing Z-pinch system to test the physics of pinch stabilization at significantly higher discharge energy and pinch current.

The ARPA-E ALPHA projects are aimed at developing prototype technologies to explore new pathways to fusion power. The UW/LLNL team was one of nine winners of the $30 million call for proposals.

The Z-pinch is a geometrically simple and elegant approach to fusion, utilizing an electric current to simultaneously magnetically confine, compress and heat a cylinder of plasma. However, the traditional Z-pinch has been plagued by instabilities that prevent attainment of conditions required for net fusion energy output.

Sheared axial flows have been shown to stabilize disruptive Z-pinch instabilities at modest plasma conditions. "Through experimental and computational studies, the team will attempt to scale this concept to high current, plasma density and temperature with a goal of demonstrating a more practical path to a compact, low-cost fusion reactor," said Harry McLean, a physicist within the Fusion Energy Sciences Program at LLNL and project scientist leading LLNL's side of the partnership..

The project will take three years to complete. Based on a seminal publication authored in 1995 by Uri Shumlak, now a UW professor and the project lead scientist, along with Charles Hartman of LLNL, and further motivated by encouraging experimental results in the intervening 20 years, the program combines experimental and computational efforts to answer key questions on whether the sheared-flow stabilized Z-pinch concept has the potential for scaling to a fusion power reactor.

The existing "ZaP" experiment, as it is called and sited at UW and operating for the past 16 years, has shown promising results at low discharge current and input energy. This device provides the starting point for the proposed project and has identified the fundamental issues to be addressed:

The objectives of work require that the discharge current and energy be increased by a factor of 10. This requires two large construction tasks: installing a larger capacitor bank for more input energy and fabricating new electrodes to handle the higher energy. LLNL will relocate and adapt pulse power systems, controls and data acquisition equipment used in previous fusion experiments at LLNL. UW postdocs and graduate students, under the direction of professor Brian Nelson at UW, will redesign the existing electrodes, which form the flow conditions and generate the flow Z-pinch plasma, to handle the much larger currents and heat loads expected. Both institutions will collaborate in performing experiments and adding new diagnostics and control systems.

Integrated computer modeling will play a critical role in this effort in two key areas: achieving predictive whole-machine modeling capability and guiding the next steps as performance is scaled up. In addition to macro-scale fluid modeling, particle-in-cell kinetic modeling will interrogate the physics at the smallest scales. These codes and computing platforms only recently have advanced to the point where details of sheared-flow stabilization can be examined. LLNL Engineering Group Leader Andrea Schmidt will lead the kinetic modeling efforts for the team. Shumlak and Nelson will lead the fluid modeling activities.

"The flow-stabilized Z-pinch is a simple and compact device with compelling features, such as easy integration with liquid walls and no large magnetic coils. This eliminates many of the unresolved materials and technology problems facing most other fusion power concepts. If the plasma physics works out as we scale up in energy, the device could make a very attractive fusion power system" McLean said.