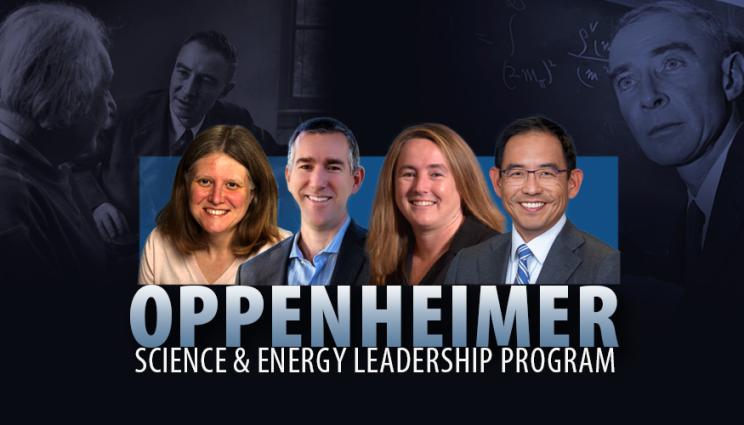 Teresa Bailey is a 15-year Lab employee who is a nuclear engineer by training. She is the associate program director for the Weapon Simulation and Computing/Computational Physics (WSC/CP) program in Weapons and Complex Integration (WCI). In this role, she oversees 10 major software projects that deliver multiple, state-of-the-art multiphysics simulation codes. These codes represent a cornerstone capability used routinely to support WCI and Global Security missions. Currently, the WSC/CP program, in strong partnership with the WSC/Livermore Computing program, is focused on porting and optimizing these codes for the El Capitan architecture, ultimately demonstrating national success for exascale high-performance computing.

“This program is very interesting because it provides a unique opportunity to learn about DOE as a whole entity,” Bailey said. “It will be quite an experience to see the breadth and depth of science represented within the DOE complex.”

Brent Blue is the National Security Applications manager in the National Ignition Facility (NIF). He oversees a program of research on the effects of intense bursts of radiation on materials and electronics. His program supports the W87-1 and W93 for Lawrence Livermore, Los Alamos and Sandia national laboratories as well as the U.S. Air Force, U.S. Navy, Atomic Weapons Establishment and the Missile Defense Agency.

Blue is in his second stint at LLNL and has been back since 2015. He joined LLNL after getting his Ph.D. at the University of California, Los Angeles in 2003. He worked at conducting some of the first experiments as the laser was turned on at NIF. He left LLNL after four years in 2007 to work at General Atomics in San Diego until 2015.

“I am honored and excited to be part of the Oppenheimer Science and Energy Leadership Program,” Blue said. “I am looking forward to gaining a deeper understanding of the entire DOE and national lab mission space. Our nation’s national laboratories have amassed an amazing breadth of world leading scientists and capabilities and I hope to grow new scientific collaborations in areas where we have overlapping technical challenges.”

He added that Livermore faces many strategic challenges that are shared with the other laboratories and the Oppenheimer program will provide a forum to discuss approaches the other Labs have implemented and an opportunity to develop new strategies that will benefit all.

Lance Kim is a nuclear and mechanical engineer and policy analyst supporting Global Security’s nuclear nonproliferation mission. He joined LLNL in 2017 with a multidisciplinary skillset gained through experience in industry, international organizations, a think tank and in government. Kim previously consulted in the advanced nuclear industry and researched nuclear security matters at the European Commission’s Joint Research Centre, at the RAND Corporation as a Stanton fellow and as a public policy and nuclear threats fellow at the University of California, Berkeley. He began his career at the U.S. Nuclear Regulatory Commission followed by a posting at the International Atomic Energy Agency that sparked his interest in nonproliferation.

“I am honored to be nominated and selected for the Oppenheimer fellowship,” Kim said. “I am excited by the prospect of tackling our national security challenges by engaging with DOE leadership, networking with colleagues from across the complex and gaining insights into DOE capabilities.”

Elizabeth Wheeler joined the Laboratory as a postdoc in 1998 and stayed here ever since. By training, she is a chemical engineer. She serves as the deputy division leader in the Materials Engineering Division and the deputy director of the Center for Bioengineering. She has been involved with and led efforts in bioinstrumentation for biosecurity applications at LLNL for 20+ years.

“I am so excited and honored to have received this award,” she said. “During my career I’ve had the opportunity to work on many multidisciplinary teams and although I now know some amazing individuals from other national labs, there is so much more to the vast DOE laboratory network.

“The Oppenheimer program represents a unique opportunity for me to advance my knowledge of all these labs and then to leverage that knowledge to build teams and projects that are greater than the sum of our individual strengths and expertise. By learning about the other labs, I hope to be able to create more multidisciplinary teams across the DOE complex to address problems of national security. Being a part of this program is a fantastic opportunity, and I am thrilled to participate in it and then give back not only to the program itself but also to LLNL.”

Bailey, Blue, Kim and Wheeler are among four of the of 34 individuals representing all 17 of the DOE national labs this year, with professional backgrounds spanning technical, operational and strategic domains. Selection as an Oppenheimer fellow is a highly competitive process. Candidates are nominated by national lab directors, assessed by a committee of former national lab directors and former senior DOE officials and accepted into the program by the National Laboratory Directors’ Council (NLDC).

Throughout the program, OSELP fellows benefit from the experience and advice of program mentors who are drawn from former lab directors, former senior DOE officials and other highly distinguished professionals. Engagement with these senior leaders is expected to have a transformative impact on the perspectives and career trajectories of cohort members.

Throughout the year, the fellows develop thinkpieces that address major organizational, policy, scientific or other challenges within national labs' mission space. Thinkpieces are presented to the NLDC and other senior leaders at a capstone event that closes the program in December in Washington, D.C.

For more details about the program and alumni fellows, go to the OSELP website.