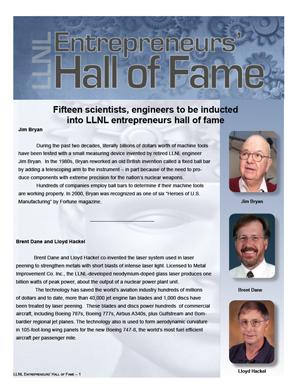 For descriptions about the entrepreneurs and some of the technologies they developed, see the

Fifteen scientists, engineers to be inducted into LLNL Entrepreneurs Hall Of Fame

A cadre of 15 former Lawrence Livermore National Laboratory (LLNL) scientists and engineers will be inducted this Friday into the Lab's new Entrepreneurs' Hall of Fame (EHF).

The researchers who will be honored developed technologies during or after their Laboratory careers that created major economic impacts and spawned important new companies.

The entrepreneurs will be recognized and presented with plaques commemorating their induction into the Hall of Fame this Friday (Oct. 12) by Lab Director Parney Albright as a part of the Laboratory's 60th anniversary celebration. Fourteen of the 15 entrepreneurs are expected to attend.

Once in the commercial world, the LLNL EHF inductees started 23 companies and developed about 50 products.

Four of the companies -- Cepheid, Digital Globe, Valid Logic/Cadence Design and Rambus -- founded or co-founded by six of the inductees have a current valuation of more than $8 billion. In addition, four inductees were leaders in the computer industry and computer-aided design industry in Silicon Valley, collectively starting 13 companies there.

Among the products invented by other inductees are the "mood ring" of the 1970s, the Duracell battery tester, (spawned by Lab research in liquid crystal plastics), the imagery used for Google Earth, the software that first enabled computerized automobile crash simulation (which currently saves that industry about $14 billion a year in cost avoidance, according to a recent report by the Council on Competitiveness) and rapid polymerase chain reaction used for DNA analysis.

Two of the inductees developed an advanced laser system for laser peening, which has had a major impact on the world's aviation industry by greatly improving the fatigue lifetime of costly jet engine parts. The technology has saved hundreds of millions of dollars and to date, more than 40,000 jet engine fan blades and 1,000 discs have been treated by laser peening. In addition, the process has been used to form more than 100 panels for 747-8 aircraft wings.

One inductee, a former LLNL electronics engineer, developed a "radar on a chip" or personal radar technology that has been licensed to 42 companies. The technology has been converted into about a dozen products, including fluid-level sensors, high-tech security motion systems and back-up warning systems for heavy vehicles.

The purpose of the EHF is to recognize current or former LLNL employees who have made major contributions to the people of the United States through their inventiveness and entrepreneurial work in and with the private sector.

The establishment of the Laboratory's EHF is the brainchild of Roger Werne, the deputy director of LLNL's Industrial Partnerships Office.

"For years, I had heard these stories about Livermore employees who had gone off and done great things in the commercial world," Werne said. "And, people have always asked me, 'what is the LLNL contribution to the economic well-being of the United States?"

"I decided that through the stories of our entrepreneurs we might be able to figure out part of the Lab's contribution to the U.S. economy. We don't have the whole story yet, but it is coming together," Werne added.

For descriptions about the entrepreneurs and some of the technologies they developed, see the PDF document.