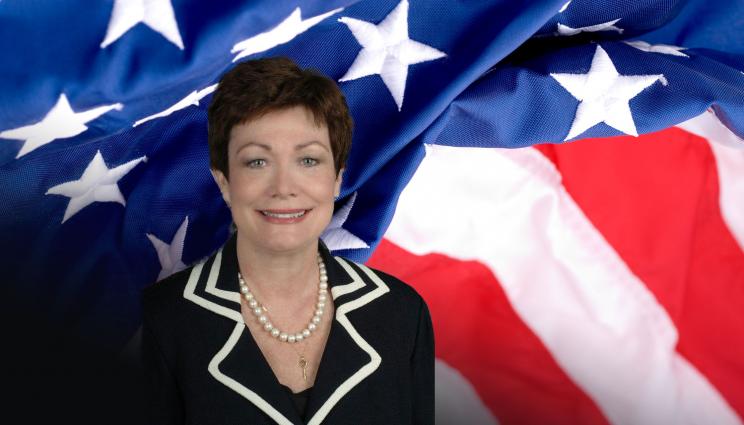 Former California Rep. Ellen O’Kane Tauscher — a centrist Democrat whose career took her from the New York Stock Exchange to Congress and then to negotiating major international nuclear arms treaties for the Obama administration — died Monday of complications from pneumonia at Stanford University Medical Center. She was 67.

Ellen Tauscher, LLNS Board of Governors chair and former congresswoman, dies at 67

Former California Rep. Ellen O’Kane Tauscher — a centrist Democrat whose career took her from the New York Stock Exchange to Congress and then to negotiating major international nuclear arms treaties for the Obama administration — died Monday of complications from pneumonia at Stanford University Medical Center. She was 67.

Tauscher had been serving as chair of the Board of Governors of Lawrence Livermore National Security, LLC and was a member of the University of California Board of Regents. She served as the representative of the 10th congressional district in California from 1997 to 2009. She left the House of Representatives to serve as Under Secretary for Arms Control and International Security Affairs within the Department of State, serving under then-Secretary of State Hillary Rodham Clinton.

Tauscher’s centrist brand of politics, dubbed "Tauscherism," boosted her national profile as a key voice of moderate Democrats in seven terms in Congress and leader of the 60-member House New Democrat Coalition. During her tenure as congresswoman, she served as chair of the Strategic Forces Subcommittee of the House Armed Services Committee, responsible for oversight of the country’s nuclear weapons stockpile, missile defense program and the national labs.

"Ellen was a great leader who leaves a legacy of service to the nation and to international nuclear security," said Lawrence Livermore National Laboratory  Director Bill Goldstein. "She gave generously of her time and passion to the causes she believed in and was a loyal friend and mentor to those who worked with her.

"Among those causes was this Laboratory, which, since her time as representative from the 10th congressional district, she has championed as a force for international security and the advance of science and technology. As chair of our Board of Governors, Ellen brought her experience, savvy and limitless commitment to excellence and the Lab’s mission, to lead us at a crucial time. Her strong, steady hand will be greatly missed.

Our hearts go out to her family."

"Ellen’s tenure in Congress was almost parallel with my time as director," recalled Director Emeritus Bruce Tarter. "She is a major reason we are where we are today. She is an incredible loss for the country and certainly for the Lab."

In July 2010, Tauscher was diagnosed with esophageal cancer and underwent an intense series of treatments including radiation, chemotherapy and surgery. Throughout her battle, she continued to serve as under secretary. In a recent interview with POLITICO, Clinton said Tauscher was "the most important person in getting us to the negotiation of the New START Treaty." In the talks surrounding what was then the first major agreement signed with Russia in more than two decades, Clinton said Tauscher showed an uncanny grasp of "the politics as well as the technology...In my opinion, it would not have happened without her.’’

Tauscher maintained close friendships with Clinton, as well as Sen. Dianne Feinstein and other members of Congress.

"I would not be where I am, or who I am, if not for Ellen Tauscher," said Eric Swalwell, who serves as representative of the 10th district. Swalwell worked as an intern for Tauscher in 2001. "I was a college athlete unsure of what I wanted to do with my life,’’ he told POLITICO. "The example she set with her public service, her leadership and her character inspired me to think beyond my own pursuits and set my goals around helping others…She broke the mold again and again."

Tauscher left politics in 2012 and went on to serve on a number of publicly held corporate and nonprofit board positions, among them the boards of Edison International/Southern California Edison, eHealth and the National Comprehensive Cancer Network, which she also chaired. She was a member of the board of advisers of SpaceX, the board of directors of BAE Systems Inc, NTI and the executive committee of the Atlantic Council, as well as was vice chair of the Atlantic Council's Brent Scowcroft Center on International Security.

Born in Newark, New Jersey, she graduated from Seton Hall and was the youngest woman to become a member of the New York Stock Exchange. In 1989, she moved to California and founded the ChildCare Registry to verify the background of child care workers. She was married and divorced twice, to investor William Tauscher and a pilot, Jim Cieslak. She is survived by her daughter Katharine.