Clostridium thermocellum is an anaerobic, thermophilic, cellulolytic, and ethanogenic bacterium capable of directly converting cellulosic substrate into ethanol. The bacterium can potentially be utilized in a biomass energy process. 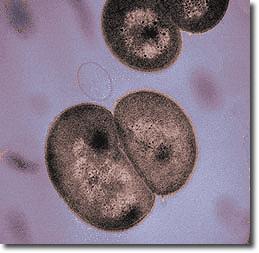 Deinococcus geothermalis is remarkable not only for its extreme resistance to ionizing radiation, but also for its ability to grow at temperatures as high as 55 °C.

ORLANDO, Fla. — Microbes, thriving in even the world's most extreme environments, are capable of performing myriad biological functions, learned over the billions of years they have inhabited the planet. Those lessons, and how they can be captured to render clean renewable sources of energy and to repair damaged environments, are among the many secrets encoded in their DNA sequence. On May 23, at the general meeting of the American Society of Microbiology (ASM), the U.S. Department of Energy Joint Genome Institute (DOE JGI) announced that it has finished the sequence of 100 microbial genomes and released this information for the benefit of the global research community.

ASM President Dr. Stanley Maloy, who touched on DOE JGI's achievement in his President's Forum remarks, said that the 100 microbes represent a rich portfolio of the vast and mostly uncharacterized microbial world. "DNA sequencing has opened a particularly productive vein to mine in exploring and expanding the frontier of microbiology," Maloy said. "Especially where, through conventional culture methods, we are unable to shed light on the metabolic profiles of these microorganisms and their environmental implications, DNA sequencing provides us a welcome set of tools."

"The power of DOE JGI sequencing microbes, and other organisms, is that it gives us the complete genomic ‘parts list’ of those organisms," said Dr. Raymond L. Orbach, Director of the DOE Office of Science. "With this list in hand, we can explore how microbes use these parts to build and run their key functions, many of critical importance to DOE because they can break down plant materials to produce such useful sources of energy as ethanol and hydrogen, and clean up toxic waste sites. We know that microbes can perform these and a multitude of other amazing tasks and with the proper technology we can harness these capabilities."

DOE JGI, a national user facility, has sequenced or is in the process of sequencing more than 380 organisms, more than any other institution in the world. DOE JGI averages more than 3.1 billion bases or letters of sequence generated per month, or roughly the equivalent of a human genome once over. As microbes range in size from typically five to tens of millions of bases, several microbes could be sequenced in one day. However, the sequencing process, in order to meet rigorous quality standards and to satisfy the demands of the scientific community, is an iterative one, requiring six- to eight-times coverage. The term "finished," associated with the 100 microbial genomes accomplished by DOE JGI, is a technical designation referring to a standard of accuracy established for the Human Genome Project of tolerating no more than one mistake in 50,000 letters of genetic code with no gaps.

The microbes sequenced by DOE JGI, both single-celled and those multi-celled organisms invisible to the naked eye, cross all main branches of the tree of life: Eubacteria, Archaea, and even the Eukaryota, which include microscopic fungi, plants, and animals.

The 100th microbial genome, a project originally proposed by Dr. Kevin Sowers of the Center of Marine Biotechnology at the University of Maryland Biotechnology Institute (UMBI), is Methanosarcina barkeri fusaro, a methane-producing organism that exploits a unique metabolic pathway to do the job. This microbe, while isolated from a freshwater mud sample, also lives in the rumen of cattle where cellulose and other polysaccharides are digested.

"We are delighted that the DOE JGI’s 100th genome is a microorganism that one of our UMBI faculty members has been studying to evaluate its potential for bioremediation and as an alternative energy source," said Dr. Jennie Hunter-Cevera, UMBI President. "By sequencing this and other important organisms, DOE JGI is helping to accelerate biotechnology discovery and innovation."

"Green sulfur bacteria, Chlorobi, are extremely important players in the global cycling of carbon, sulfur, and nitrogen," said Bryant. "Thanks to DOE JGI, the availability of multiple genome sequences for the Chlorobi has turbocharged our functional genomics studies. This has allowed us to make remarkable progress in understanding sulfur and ferrous iron oxidation, carotenoid and chlorophyll biosynthesis, photosynthetic light harvesting, oxygen tolerance, and many other aspects of the physiology and metabolism of the green sulfur bacteria."

The search for microorganisms that can inform solutions to energy and environmental challenges can go to the extremes – the boiling hot pools in Yellowstone National Park, for instance – and lead to new biotechnology products.

"DOE JGI has played an invaluable and otherwise unavailable role in the development of new enzymes for industrial use," said David Mead, President & CEO, of Lucigen Corporation. "The sequence acquisition of DNA from superheated thermal aquifers and other unique sources has resulted in the discovery of a new class of thermostable DNA polymerases and unique thermostable cellulase and hemicellulase enzymes. Without the DOE JGI these valuable molecules would not have made it into the marketplace."

Here are highlights of some of the finished 100 with references to the collaborating institutions and the roles of the organisms in their environment:

DOE JGI provides the scientific community at large with access to DNA sequencing for DOE-relevant projects based on scientific merit as judged through independent peer review. Nominations, due August 10, 2006, are currently being sought for candidate microbes, microbial consortia, for draft genomic sequencing in support of DOE’s Office of Biological and Environmental Research (BER) Bioenergy Program element within its Genomics: GTL Program. Nominated candidates must be relevant to the BER mission to determine genomic sequences of microorganisms involved in energy production, particularly conversion of lignocellulosic material to ethanol, or hydrogen, or other biofuels.