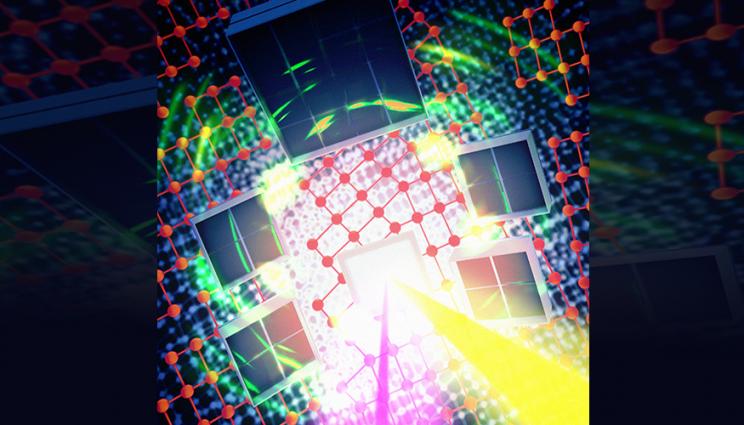 This image depicts the experimental setup, in which a tantalum sample is shock loaded by a laser and probed by an X-ray beam. The diffraction patterns, collected by an array of detectors, show the material undergoes twinning. The background illustration shows a lattice structure that has created twins. Artwork by Ryan Chen/LLNL

Shock compression is a challenging area of study, as it combines extreme conditions, such as high pressures and temperatures, with ultrafast timescales. To simplify the problem, scientists often assume that solid materials behave like a fluid, flowing and changing their shape (plasticity) without resistance. Yet, as a solid, most materials also retain a lattice structure. As a material flows, changing shape, somehow the lattice must change as well while still maintaining the regular pattern of the lattice. The study of plasticity at a most fundamental level then rests on understanding how the lattice is changing while a material is deforming.

Dislocation-slip (where lattice dislocations are generated and move) and twinning (where sub-grains form with a mirror-image lattice) are the basic mechanisms of plastic deformation. Despite their fundamental importance to plasticity, diagnosing the active mechanism in-situ (during the shock) has been elusive. Previous research has studied the material after the fact (in "recovery"), which introduces additional complicating factors and has led to conflicting results.

"In-situ diffraction experiments have been around for a few decades but have gained prominence only recently as high-powered lasers and X-ray free electron lasers have made the measurements more widely available, more sensitive and able to reach more extreme conditions," said Chris Wehrenberg, LLNL physicist and lead author on the paper. "Our work highlights an untapped area of study, the distribution of signal within diffraction rings, which can yield important information."

The team’s experiments were conducted at the new Matter in Extreme Conditions end station, located at SLAC’s Linac Coherent Light Source, which represents the leading edge in a large, worldwide investment in facilities that can pair in-situ diffraction with high-pressure and high-strain rate techniques.

"In these experiments, you launch a shock wave with a laser, where a jet of laser-heated plasma creates an opposing pressure in your sample, and probe the state of your sample with an X-ray beam," Wehrenberg said. "The X-rays will scatter off the sample at specific angles, forming diffraction rings, and the scattering angle provides information on the structure of the material."

Despite the growing popularity of in-situ diffraction experiments, most focus on the scattering angle and don’t address the distribution of signal within a diffraction ring. While this approach may reveal when a material changes phases, it will not reveal how a material is behaving outside of a phase transition.

By analyzing the changes of signal distribution within the lines, the team could detect changes in the lattice orientation, or texture, and show whether a material was undergoing twinning or slip. In addition, the team could not only demonstrate whether the sample -- tantalum, a high-density metal -- twins or slips when shock compressed, but were able to demonstrate this for most of the entire range of shock pressures.

"LLNL is deeply engaged in material modeling as part of the science-based stockpile stewardship mission and has programmatic efforts to model tantalum at the molecular level, as well as plasticity modeling," Wehrenberg said. "These results are directly applicable to both of those efforts, providing data that the models can be directly compared to for benchmarking or validation. In the future, we plan to coordinate these experimental efforts with related experiments on LLNL’s National Ignition Facility that study plasticity at even higher pressures."

While the techniques for analyzing X-ray diffraction data for changes to the texture and microstructure of a material have been practiced in quasi-static experiments, they are new to the field of shock experiments. This combination of techniques is relevant to many other fields. For instance, planar deformation features in quartz caused by twinning and microfracture are a common indication of meteor impact sites, and these features also can affect the magnetization of other geological materials. Similarly, the twinning plays a crucial role in the self-sharpening behavior of ballistic penetrators and has been linked with increased ductility in high-performance ceramics for armor applications. Understanding high-rate plasticity is critical for hardening space hardware from hypervelocity dust impacts and even has implications for the formation of interstellar dust clouds.