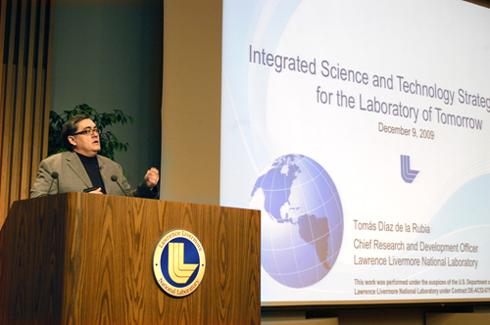 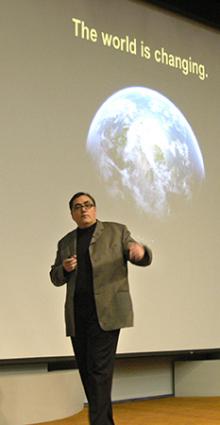 During the past year, the Laboratory has made a significant investment in the science, technology and engineering foundations on which the Laboratory is built.

And this time around, senior managers are going to "keep a very close eye on the return on investment that was proposed in the roadmap to make sure that it is actually being achieved," said Tomás Díaz de la Rubia, LLNL's chief research and development officer and acting principal associate director for Science and Technology, during an all-hands meeting Wednesday in which he discussed progress on the Roadmap to the Future, the Lab's five-year investment strategy.

"The process that we started last year led to a five-year roadmap of how to take the internal resources we have at the Laboratory like money, people, infrastructure and operations to enable a vision for the future," he said.

While maintaining the Laboratory's core mission of nuclear deterrence, the roadmap outlines a new national security imperative that focuses on broader national needs such as cyber and space security. "The Web allows us to do a lot of cool stuff but it also provides a playground where those who want to harm us can," Díaz de la Rubia said.

The roadmap also focuses on energy security and climate change.  "We as a Laboratory provide guidance to policy makers about decisions. There are a lot of strategies for a sustainable planet and they're not all about technologies," he said.

Díaz de la Rubia ran through a stream of projects in the energy and climate areas where the Laboratory is playing a critical role, including wind energy, commercial fusion plants, carbon capture and sequestration, geothermal energy, underground coal gasifcation, nuclear power and climate change analysis. He said modeling and simulation should integrate energy, policy and the climate system. "We need to apply science-based decision making. It's the sort of vision that a national laboratory like Lawrence Livermore must play a central role in."

He also outlined several other areas where the Laboratory has made significant investments for the future, among them: exoscale computing technologies; understanding the interiors of large planets using the National Ignition Facility (NIF); completion and start of experiments at NIF; uncertainty quantification science as applied to climate change; and a negative emissions program in which carbon dioxide is captured at the source.

"We have to be able to innovate while articulating our value proposition clearly to the customer," Díaz de la Rubia said. "We have to monitor the return on investments, and that's a key challenge for this process."

"By creating an integrated strategy for our ST&E roadmap today, we hope to see the Laboratory of tomorrow with new facilities and capabilities that broaden our national security role. We have to create a whole new environment. The theme is growth, deliver on the missions we have today and commitments to the sponsors and interact with a broad range of customers," he concluded.