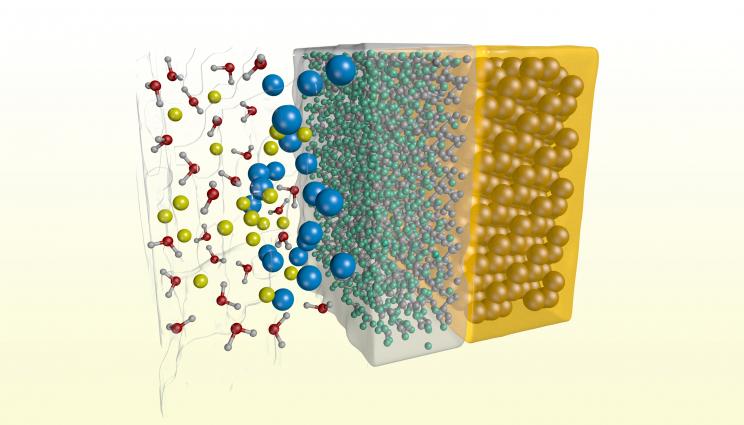 An artistic rendering of ion adsorption at a silane-modified silicon surface, showing that large anions, such as I- (blue spheres), tend to absorb stronger at the interface. Image by Liam Krauss/LLNL

Understanding and controlling ion transport in porous materials and at hydrophobic interfaces is critical to a wide variety of energy and environmental technologies, ranging from ion selective membranes, drug delivery and biosensing to ion batteries and supercapacitors.

However, a detailed understanding of nanoscale transport is still in its infancy. For instance, nanoscale transport has often been described by simplified continuum models that rely on a point charge description for ions and a homogeneous dielectric medium for the solvent, which do not differentiate ions with the same valency.

In a recent study, Lawrence Livermore National Laboratory (LLNL) scientists, in collaboration with University of California, Irvine (UCI), showed that ion transport near a hydrophobic interface is dependent not only on applied voltage, but on the type of ion. The team found that ion currents through single silicon nitride nanopores that contain a hydrophobic-hydrophilic junction can be highly dependent on the size and hydration strength of the solvated ions.

“Our molecular dynamics simulations showed that the large anions, such as bromine and iodine, are prone to migrate from the aqueous solution to the interface, leading to the anion accumulation responsible for pore wetting and enhanced ion currents,” said Fikret Aydin, a postdoc in the Quantum Simulations Group in LLNL’s Materials Science Division, and a theory-lead of a paper appearing in ACS Nano.

Zuzanna Siwy, a UCI professor in the Department of Physics and Astronomy and a co-author of the paper, said the study is of great interest in preparing ion-responsive systems based on hydrophobic pores. "One can also imagine it should be possible to prepare a valve-like membrane, which becomes open for ionic and molecular transport when a threshold voltage or/and gating ion is added,” she said.

Anh Pham, an LLNL material scientist in the Quantum Simulations Group and a co-lead author of the paper added: “The findings provide a fundamental understanding on the role of ion hydration on the properties of solid/liquid interfaces, which is important for designing nanoporous systems that are selective to ions of the same charge, as well as for realization of ion-induced wetting in hydrophobic pores.”

Other researchers include Cheng Zhan of LLNL and Jake Polster and Elif Turker Acar, both of UCI. This work was supported as part of the Center for Enhanced Nanofluidic Transport, an Energy Frontier Research Center led by MIT and funded by the U.S. Department of Energy Office of Science. Computational support was from the LLNL Grand Challenge Program.