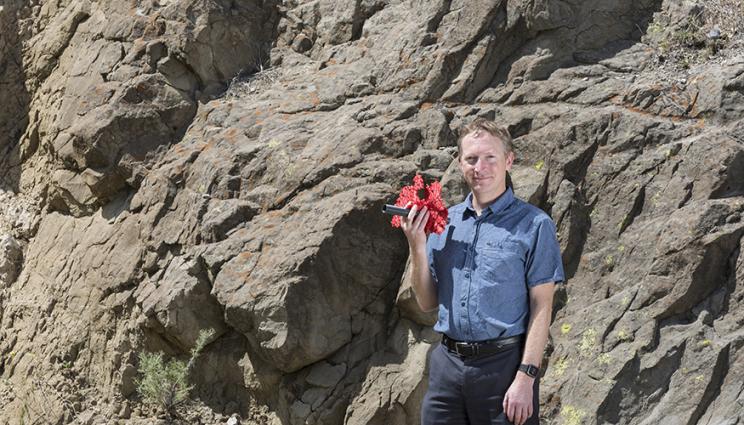 Joe Morris and a 3D-printed model of the geometry of a hydraulic fracture in shale, created using LLNL's predictive tools.

Growing up in the suburbs of Melbourne, Australia, Lawrence Livermore National Laboratory (LLNL) scientist Joe Morris spent much of his time conducting home experiments with chemicals, test tubes and pipettes before moving on to electronics and computer programming.

“My parents taught me to be curious, seek answers and be a free thinker,” Morris said of his mother and father, both teachers. “They were keen to point out that students were often taught the ‘what’ for exam performance, but not encouraged to ask ‘why.’ ”

Though his parents helped Morris explore his emerging interests — which included math, physics and astronomy — they never forced him to dive deeper into science outside of school. Nevertheless, he was motivated to teach himself electronics by dismantling and repairing radios and tape decks. Then, at age 12, Morris began coding on his family’s first home PC, a Commodore 64. During this time, in the 1980s, computers were quickly becoming faster, more powerful and ubiquitous. His programming skills grew in tandem with the machines’ development.

“The idea of being able to give a machine a bunch of instructions and have it work on a problem I found too boring or complex to solve manually was fascinating to me,” Morris explained. By high school, Morris knew that he wanted to pursue a career in computational physics — a discipline that brings together computer science, mathematics and physics to develop predictive solutions where mathematical analysis alone is incapable.

“I realized it was a tool that could be applied to solve problems at a grand scale — anything from a large engineering project to simulations of metals at the atomic scale,” said Morris, who leads LLNL’s computational geosciences research group. “Computers can help us predict emergent and complex phenomena for a multitude of problems.”

As an undergraduate at Monash University near Melbourne, Australia, Morris majored in math, but also took physics and computer science classes. Monash’s mathematics faculty conducted computational research, so he gained a fair amount of knowledge in computer science along the way. During his final year, Morris focused on mathematics and computations with applications in astrophysics and meteorology. As his interest in computational physics only increased during this period, Morris decided to pursue a doctorate.

At Monash, Morris’s doctoral dissertation focused on smooth particle hydrodynamics (SPH), a numerical analysis method that could be applied to modeling problems in magnetohydrodynamics (the study of the magnetic properties and behavior of electrically conducting fluids such as plasmas, liquid metals, saltwater and electrolytes). During his Ph.D. program, Morris spent time at Cambridge University, the Max Planck Institute and the University of Kaiserslautern, where he helped scientists use SPH to develop models for astrophysical, industrial and aerospace applications. This set the stage for what has become a common thread throughout Morris’ career: working as a specialist who develops and validates models for applied research.

After graduating with his doctorate in applied mathematics (with a specialty in astrophysical computational fluid dynamics), Morris spent three years as a postdoctoral fellow at Purdue University, where his first project was working with a team to develop the first version of SPH for modeling subsurface flows aimed at cleaning up soil contaminants at U.S. Air Force bases.

The years Morris spent at Purdue turned out to be influential. During this time, Morris worked on a geomechanics project for the first time and was hooked. Geomechanics explores how rocks respond to force, whether the force is applied by nature or human activity. His supervisor for the project, Purdue professor and rock physicist Laura Pyrak-Nolte, became his long-term mentor. She introduced him to the American Rock Mechanics Association — an international professional society that Morris now leads as its president.

After a productive tenure at Purdue, Morris learned there was an experimental physics group at LLNL specializing in rock mechanics. He joined that group as a postdoc in 1999, but left the Lab a few years later to work in industry as a modeler for geomechanics research projects with applications in the oil and gas industry.

LLNL’s strength in conducting multidisciplinary research projects drew Morris back to the Lab in 2014, where he took on the computational geosciences group lead position within the Physical and Life Sciences Directorate. Since then, he has been focused on a range of multi-institutional geomechanics research projects, including one aimed at securing the border against tunnel threats. Morris also serves as the associate program leader for fossil energy solutions and the associate program leader for nuclear effects research and development.

One of his most prominent projects is the EGS Collab (led by principal investigator Tim Kneafsey at Lawrence Berkeley National Laboratory), a multi-lab effort that is testing the efficacy of using enhanced geothermal systems (EGS) to access geothermal energy resources from rock formations that cannot be harnessed using traditional methods. Funded by the Department of Energy’s (DOE) Geothermal Technologies Office, the EGS Collab is conducting field experiments in a former gold mine in South Dakota (now known as the Sanford Underground Research Facility), with the purpose of validating stimulation methods and DOE simulation capabilities. Morris led the experimental design phase of the project, which aims to understand how to reduce risks and accelerate EGS commercialization.

“EGS Collab is a bridge between lab-scale rock mechanics studies and the full scale of the research we plan to conduct in the future for a different project located in Utah — the Frontier Observatory for Research in Geothermal Energy,” Morris said.

Morris credits Livermore’s unique research environment with the opportunities he’s been given to conduct and participate in a wide angle of cutting-edge research over the last two decades.

“Livermore’s approach to matrixing scientists and engineers — that is, enabling them to devote their time between a number of different research projects across LLNL rather than just focusing on one area — is unparalleled among the national labs,” he noted. “It allows researchers to continue to grow in an interdisciplinary fashion and facilitates new opportunities for the Lab. My observation of how poorly this is done by industry was a major factor that led me back to LLNL.”

What’s next for Morris? Recently, he has been involved in projects aimed at increasing researchers’ understanding of how toxic materials (released during an accident or detonation) disperse in the atmosphere. The knowledge gained will be applied toward improving emergency response plans of all sizes and complexities, from city to national plans. As this research leverages Morris’ background in fluid mechanics and physics in new ways, Morris believes it is a perfect example of how LLNL employees are consistently encouraged to expand their skills and experience.

“This kind of new adventure is what a career at LLNL can make possible,” Morris said.