The art of shaping experimental design

A team of Lawrence Livermore National Laboratory (LLNL) researchers was honored with the Neill Griffiths Award this month, recognizing the most significant contribution to shaped charge technology. The award was presented at the annual International Symposium on Ballistics.

The research helped solve a challenge Shell International Exploration and Production faced: how to sever the connection between an offshore drilling rig with the seabed in case of an emergency.

When the 2006 Deepwater Horizon oil spill took place in the Gulf of Mexico, the inability to detach from the seabed had disastrous consequences, beyond the environmental repercussions: 11 crew members died and a $500 million rig was lost.

The tricky part is that the emergency severance tool would be completely inaccessible – as deep as 10,000 feet underwater for months on end – and Shell needed to be certain it would work at a moment’s notice without fail, and without going off inadvertently. Shell turned to the national labs, and the project ended up in the hands of LLNL physicists and computational engineers who cut their teeth in the LLNL weapons program.

"They wanted to make sure this didn’t happen again," LLNL physicist Dennis Baum said. "But they needed help designing something with extreme reliability requirements and high consequence of failure. That’s what we do really well here. Many of the requirements are similar to what we face with the Stockpile Stewardship Program."

To sever the rig from the seabed, the team designed a system using shaped charges to cut through an 18.5-inch-diameter steel tube filled with drilling mud and an interior drill collar that’s 9.5 inches in diameter with 3-inch walls. Using shaped charges to cut through steel is something the LLNL team knows unequivocally. But there was one element that wasn’t yet validated in LLNL models.

"You have to have enough jet left after penetrating the mud to sever the interior collar," Baum said. "We understand the shaped charge piece. The only new unknown was the drilling mud. It’s a very specific question, and we designed a clean, unambiguous experiment to answer it."

To answer this question, Baum’s team designed an experiment with three shaped charges firing simultaneously, allowing the team to compare how the shaped-charge jets penetrate varying amounts of drilling mud. The team placed 60 miillimeters (mm) and 120 mm of drilling mud in the paths of two of the shaped charges. The third had no barrier in front of the jet, allowing it to serve as a placebo of sorts. The team snapped an X-ray photo of the charges as they were set off to show that they fired simultaneously, and another X-ray photo after the jets penetrated the mud layer, allowing them to measure the specific impact drilling mud had on the jets.

"It was a beautiful result," Baum said. "The minute I saw them, I said, that’s presentation quality." 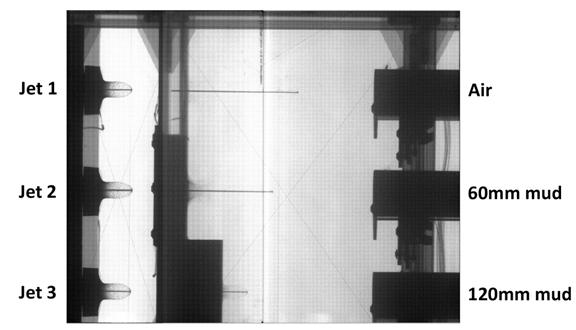 The results validated their model of shaped-charge jet erosion in drilling mud, which is critical to understanding if charges in the field would have enough energy after penetrating the drilling mud to sever the interior steel collar. The research could end up saving lives, but if you ask Baum, he’s just as excited to help expose early-career researchers to the art of effective experimental design.

"Symposiums like this tend to focus on simulation," Baum said. "But that’s only good if there aren’t any unknown variables in your model. When you are working with an unknown, it’s critical that you know how to design a focused experiment capable of definitively answering a specific question. That was our contribution."

Co-authors on the research include LLNL engineers Gregory Schebler, Douglas Dobie, Douglas Faux and Robert Kuklo. The research was funded by Argonne National Laboratory on behalf of their sponsor Shell International Exploration and Production Inc.