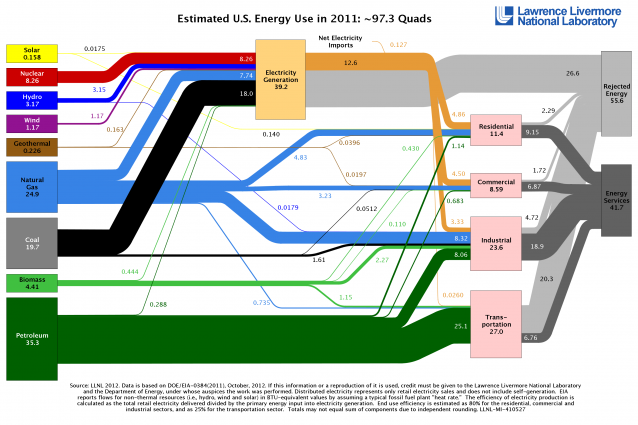 Americans used less energy in 2011 than in the previous year due mainly to a shift to higher-efficiency energy technologies in the transportation and residential sectors. Meanwhile, less coal was used but more natural gas was consumed according to the most recent energy flow charts released by Lawrence Livermore National Laboratory.

"Wind energy jumped significantly because, as in previous years, many new wind farms came online," said A.J. Simon, an LLNL energy systems analyst who develops the flow charts using data provided by the Department of Energy's Energy Information Administration. "This is the result of sustained investment in wind power."

Hydroelectricity jumped significantly in 2011 because 2011 saw large amounts of precipitation in the Western U.S. Hydroelectric dams were able to produce at their maximum levels while keeping reservoirs full. Similar levels of hydroelectric production were seen in 1997, 1998 and 1999 due to wet years.

"Sustained low natural gas prices have prompted a shift from coal to gas in the electricity generating sector," Simon said. "Sustained high oil prices have likely driven the decline in oil use over the past 5 years as people choose to drive less and purchase automobiles that get more miles per gallon."

"With the advent of shale gas, it appears that natural gas prices in the United States may remain lower than their historical averages for many years into the future," Simon said. "This has prompted many gas users in the industrial and electricity generating sector to switch from coal or oil to natural gas when it is technically possible, but might not have been economical at higher gas prices."