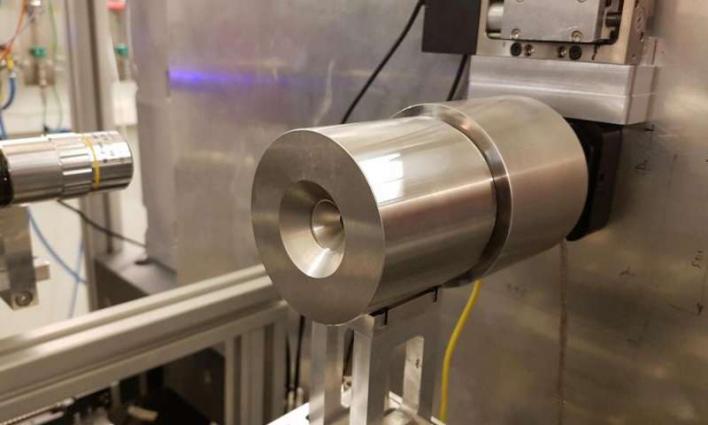 The new-generation dynamic diamond anvil cell (dDAC), developed by scientists from Lawrence Livermore National Laboratory (LLNL), Deutsches Elektronen-Synchroton (DESY), the European Synchrotron Radiation Facility (ESRF) and the universities of Oxford, Bayreuth and Frankfurt/Main, compresses samples faster than any similar device before. The instrument can turn up the pressure at a record rate of 1.6 billion atmospheres per second and can be used for a wide range of dynamic high-pressure studies. The developers present their new device, that has already proved its capabilities in various materials experiments, in the journal Review of Scientific Instruments.

"For more than half a century, the diamond anvil cell or DAC has been the primary tool to create static high pressures to study the physics and chemistry of materials under those extreme conditions -- for example, to explore the physical properties of materials at the center of the Earth at 3.5 million atmospheres," said lead author Zsolt Jenei from LLNL.

To simulate fast dynamic processes like earthquakes and asteroid impacts more realistically with high compression rates in the lab, Jenei's team, in collaboration with DESY scientists, developed a new generation of dynamically driven diamond anvil cell (dDAC), inspired by the pioneering original LLNL design, and coupled it with the new fast X-ray diffraction setup of the Extreme Conditions Beamline P02.2 at PETRA III.

The new cell consists of two small modified brilliant diamonds that are pushed together by a powerful piezo electric drive. Thanks to improvements like the much stronger piezo actuators and fast, high peak current amplifiers, the new device is capable of rapidly compressing the tiny samples between the diamond anvils more than a thousand times faster than previous generation dynamic diamond anvil cells. "One unique aspect fo the dDAC technique is that it also allows us to characterize the response of a sample under well controlled fast decompression," said co-author Earl O’Bannon from LLNL.

To study the changes in physical properties of materials under high pressure, scientists shine X-rays on the small samples and record the way the X-rays are diffracted by the material. These diffraction patterns allow scientists to determine the structure of the material. However, to take snapshots of high-speed dynamic processes, the X-ray flash needs to be bright enough and the camera -- the detector -- must be fast enough.

"For almost 10 years since the first invention of the dDAC at our Laboratory, it has been extremely difficult to conduct fast diffraction experiments because of the lack of photon flux and, more important, fast and highly sensitive high-energy X-ray diffraction detectors," Jenei said. Only with the advent of the extremely bright third-generation X-ray sources, such as PETRA III, and the development of highly sensitive cameras, such as the gallium-arsenide (GaAs) Lambda detector, invented by the DESY detector group, did it become possible to collect diffraction images with the adequate short exposure times and temporal resolution."

The Extreme Conditions Beamline (ECB) at DESY has the world's first two GaAs Lambda detectors. "By triggering them with a delay of 0.25 milliseconds, we are able to collect up to 4,000 frames per second," said Hanns-Peter Liermann, the beamline scientist in charge of the ECB. The detectors were funded through a joint research project awarded by the German Federal Ministry of Education and Research BMBF to the Goethe University Frankfurt, where Björn Winkler is the principal investigator.

Researchers working on the project have demonstrated the performance and versatility of the experimental setup with fast compression studies of heavy metals such as gold and bismuth, as well as light compounds such as ice (H2O) and planetary materials such as ferropericlase. While conducting fast diffraction experiments on gold, the team demonstrated an increase in pressure from 1,000 atmospheres to 1.4 million atmospheres in only 2.5 milliseconds (thousandth of a second), resulting in a maximum compression rate of 160 terapascals per second (a terapascal is a measure of pressure). During this extremely short time, the detectors collected eight diffraction patterns across the complete compression path.

"We believe that with the existing setup we can improve the compression rates to maybe thousands of terapascals per second," Liermann said. However, this will need even brighter X-ray flashes and still faster cameras such as the planned upgrade of PETRA III to a next-generation X-ray source PETRA IV and the High Energy Density experimental station (HED) at the European X-ray laser European XFEL, where DESY is participating in building a dDAC setup as part of the Helmholtz International Beamline for Extreme Fields (HIBEF) consortium.