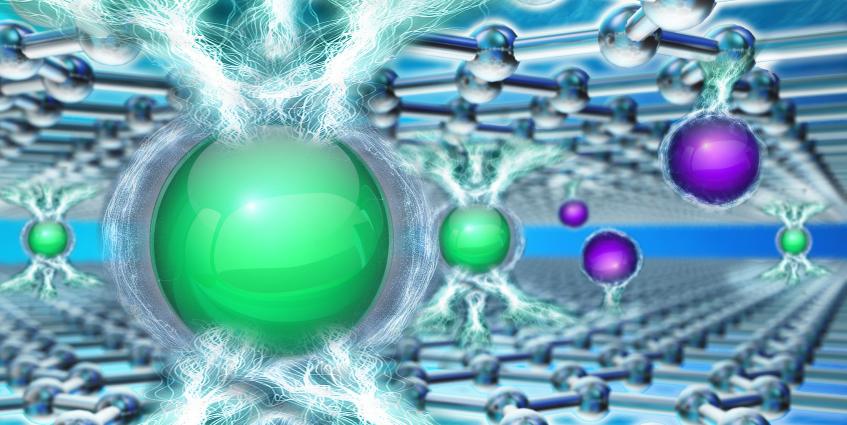 An artistic rendering of cation adsorption in a graphene network. Image by Thomas Reason/LLNL

While ions adsorbed on carbon electrodes can vary in size and shape, when it comes to selectivity and energy storage, size really does matter.

In an effort to boost energy storage and water desalination technologies, Lawrence Livermore National Laboratory (LLNL) scientists found that capacitive performance and ion selectivity of porous carbons is controlled by a complex interplay between confinement effects, the size and hydration energy of the ions (an ion is an atom or molecule with a net electric charge due to the loss or gain of one or more electrons) and the charge transfer between the electrode and the ions.

For more than a decade, LLNL scientists have developed a technique to separate ions from water known as capacitive deionization (CDI). It originally was developed as a robust and low-maintenance path for efficiently and cost-effectively removing salt from seawater and brackish water. The technology is based on the same principles (electrical double layer) that supercapacitors use to store energy.

CDI removes ions by applying exceptionally low voltage to a porous electrode capacitor, along with a low-pressure pump to move water through the electrodes. Unlike typical "flow between" capacitive deionization, the unique LLNL materials enable the feed stream to flow directly through electrode pores, thereby improving the performance and selectivity.

The performance of CDI relies extensively on the adsorption ability of ions on electrode materials in aqueous environments. However, to date, a detailed understanding of the mechanism of this process remains largely unknown, and contradictory trends have been reported in literature, even for simple alkali metal ions.

“Our study provides not only a good understanding of ion selectivity in CDI but also key factors that determine the structure and electrical response of aqueous solutions at graphitic interfaces,” said Cheng Zhan, a postdoc in the Quantum Simulations Group in Materials Science Division and lead author on a paper appearing in Nature Communications.

“The close integration between simulations and experiments is the key, which offers a far more complete understanding of how ions behave in porous carbon materials,” added Anh Pham, an LLNL material scientist and a co-lead author of the paper.

The team studied alkali-metal cations such as lithium (Li+) and cesium (Cs+). They found that the larger and more weakly hydrated the ion, the more favorable it interacts with the electrode, leading to more energy stored. More importantly, their findings on ion eﬀects, charge transfer and their interplay with conﬁnement are likely to hold for other systems with non-graphitic electrodes, as well as with diﬀerent electrolytes, such as ionic liquids and organic electrolytes.

“You can use these principles to tune the process for selectivity toward whatever ion you want,” said LLNL materials scientist Patrick Campbell, another co-author on the paper. “When it comes to selectivity and energy, size matters.”

Researchers from the National Institute of Advanced Industrial Science and Technology in Japan also contributed to this project. The research was funded by LLNL’s Laboratory Directed Research and Development program and LLNL’s Grand Challenge Program.