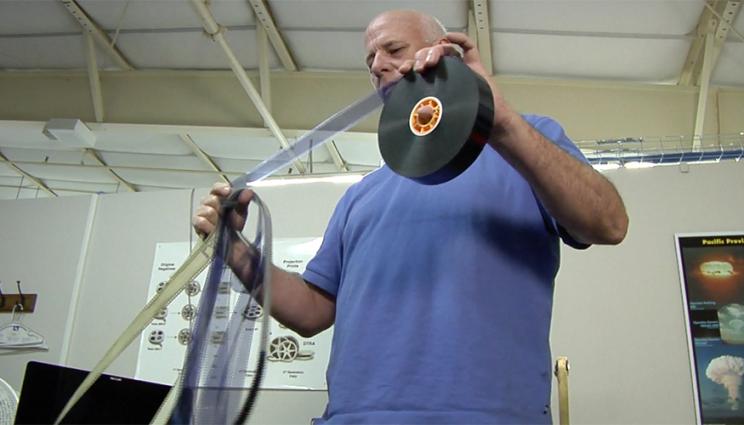 Rare-film expert Jim Moye examines nuclear test film before scanning it. Moye is part of a crack team that is scanning and reanalyzing aging film of U.S. atmospheric nuclear tests.

The U.S. conducted 210 atmospheric nuclear tests between 1945 and 1962, with multiple cameras capturing each event at around 2,400 frames per second. But in the decades since, around 10,000 of these films sat idle, scattered across the country in high-security vaults. Not only were they gathering dust, the film material itself was slowly decomposing, bringing the data they contained to the brink of being lost forever.

For the past five years, Lawrence Livermore National Laboratory (LLNL) weapon physicist Greg Spriggs and a crack team of film experts, archivists and software developers have been on a mission to hunt down, scan, reanalyze and declassify these decomposing films. The goals are to preserve the films’ content before it’s lost forever, and provide better data to the post-testing-era scientists who use computer codes to help certify that the aging U.S. nuclear deterrent remains safe, secure and effective. To date, the team has located around 6,500 of the estimated 10,000 films created during atmospheric testing. Around 4,200 films have been scanned, 400 to 500 have been reanalyzed and around 750 have been declassified. An initial set of these declassified films — tests conducted by LLNL — were reviewed by trained declassifiers and published today in an LLNL YouTube playlist.

"You can smell vinegar when you open the cans, which is one of the byproducts of the decomposition process of these films," Spriggs said. "We know that these films are on the brink of decomposing to the point where they'll become useless. The data that we're collecting now must be preserved in a digital form because no matter how well you treat the films, no matter how well you preserve or store them, they will decompose. They're made out of organic material, and organic material decomposes. So this is it. We got to this project just in time to save the data."

‘Answers were off by 30 percent’

From its inception, the project presented a series of hurdles. It took several years to locate the films, and when Spriggs did get his hands on the first few, he didn’t have a scanner that could reproduce the optical density on the films. It took about a year to convert a Hollywood-style scanner into one that could provide the level of scientific accuracy required. Then he had to locate the data sheets for the test, because without knowing the camera location, its speed and focal length, he wouldn’t be able to analyze the films. Once Spriggs did complete the first scans and roll his sleeves up for the analysis, he discovered that much of the data published were wrong. All the films would need to be reanalyzed.

"When you go to validate your computer codes, you want to use the best data possible," Spriggs said. "We were finding that some of these answers were off by 20, maybe 30, percent. That's a big number for doing code validation. One of the payoffs of this project is that we're now getting very consistent answers. We've also discovered new things about these detonations that have never been seen before. New correlations are now being used by the nuclear forensics community, for example."

The method of analysis in the 1950s and ’60s was manual. Teams of analysts used a tool called a kodagraph to enlarge the image of a single frame, shine it onto a grid and eyeball measurements of the fireball and shockwave. With so many frames to manually analyze, the company that originally captured these films employed around 1,000 analysts. Spriggs’ team can be counted on a single hand. The key to making any significant progress analyzing this many frames would be to build a team of film experts and to leverage modern technologies to automate the process.

Early on in the project, it became clear that this wasn’t going to be a one-man job. Spriggs’ first move was to bring a pair of film experts on board. Jim Moye joined the team after making a career for himself as an expert in handling rare film. In industry circles, he is famed for being trusted by the Smithsonian Institute to handle one of the only remaining copies of the film documenting Kennedy’s assassination. Pete Kuran, author of "How to Photograph an Atomic Bomb," brought unique expertise in locating long-forgotten documents, indispensable given that data sheets needed to be located for each film. The team collaborated with colleagues at Los Alamos National Laboratory (LANL), working closely with its archivist Alan Carr to gain access to the test films in LANL’s vault. And Spriggs tapped into expertise with LLNL as well, tapping software developers like Ben Kowash and Jason Bender to create tools with MatLab and Python to automate time-intensive processes.

One such process the team automated was figuring out the actual frame rate of each camera. The film flew across each camera’s shutter so quickly – thousands of frames per second – that variance existed from camera to camera. For Spriggs, getting an accurate measure of each camera’s frame rate was essential to measuring the growth of the fireball and accurately determining the test’s yield. Analyzing the frame rate manually could take eight hours for a two-second film. With the new software, the frame rate of the same film could be determined in about five minutes. Another time sink Kowash helped alleviate was reading the size of the shockwave from frame to frame, something that could take days to complete manually for each film.

‘It’s unbelievable how much energy is released’

Spriggs estimates it will take another two years to scan the rest of the films, and longer to complete the analysis and declassification. When asked why this project is so important to him, he voiced the dominant perspective among weapon scientists at LLNL: He doesn’t want nuclear weapons to be used and passionately believes the key to ensuring they aren’t is to making sure the U.S. stockpile continues to be an effective deterrent.

"We need to be able to validate our codes and trust that the answers that are being calculated are correct," Spriggs said. "The legacy that I'd like to leave behind is a set of benchmark data that can be used by future weapon physicists to make sure that our codes are correct so that the U.S. remains prepared.

"It's just unbelievable how much energy's released," Spriggs said. "We hope that we would never have to use a nuclear weapon ever again. I think that if we capture the history of this and show what the force of these weapons are and how much devastation they can wreak, then maybe people will be reluctant to use them."