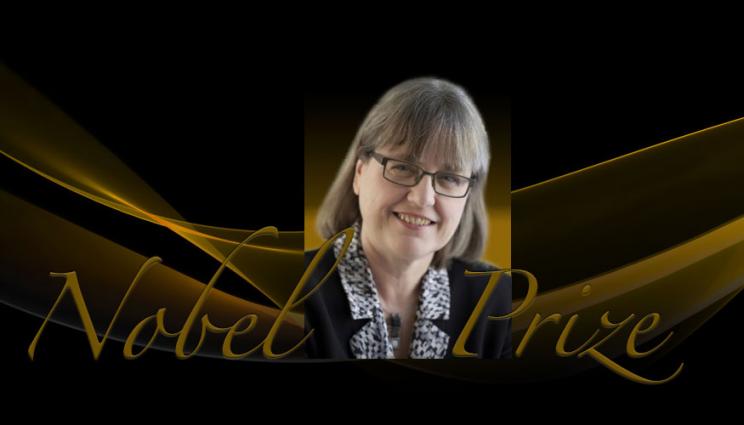 The Nobel Prize-winning research by Donna Strickland, a former staff scientist in LLNL’s Laser Programs Directorate, was instrumental in the Laboratory’s development of a series of groundbreaking short-pulse high-energy laser systems over the past two decades.

The Nobel Prize-winning research by Donna Strickland, a former staff scientist in Lawrence Livermore National Laboratory's (LLNL’s) Laser Programs Directorate, was instrumental in the Laboratory’s development of a series of groundbreaking short-pulse, high-energy laser systems over the past two decades.

Self-described "laser jock" Strickland, who worked at LLNL in 1992, is only the third woman in history to win a Nobel Prize in physics, joining Marie Curie (1903) and Maria Goeppert-Mayer (1963). Strickland and her mentor, French physicist Gérard Mourou, were named Nobel Prize laureates on Oct. 2 for their work in developing chirped-pulse amplification (CPA) to amplify ultrashort laser pulses up to the petawatt (quadrillion-watt) level.

CPA is the underlying and enabling technology for all ultra-high-peak-power laser systems, such as LLNL’s Advanced Radiographic Capability (ARC) and High-repetition-rate Advanced Petawatt Laser (HAPLS), as well as in laser eye surgery and ultrafast cameras used for imaging molecular processes. As noted by the Nobel Committee for Physics, the Laboratory’s NOVA Petawatt, the world’s first petawatt laser, was a famous early example of a CPA laser.

Strickland and Mourou share the 2018 prize with Arthur Ashkin of the United States, inventor of "optical tweezers," a process that uses light from a highly focused laser beam to manipulate viruses, bacteria and other microscopic objects.

Strickland, now a professor at the University of Waterloo in Ontario, received her Ph.D. in optical physics from the University of Rochester, home to LLNL’s frequent collaborator, the Laboratory for Laser Energetics (LLE). Her work with Mourou, a former optics professor and scientist at LLE, was the basis for her Ph.D. dissertation.

After postdoctoral research at the National Research Council in Ottawa, Strickland joined LLNL’s inertial confinement fusion program under Mike Perry, now a vice president at General Atomics in San Diego. She divided her time between work on high harmonic generation in noble gases and helping Todd Ditmire, then a graduate student and now director of the Center for High Energy Density Science at the University of Texas at Austin, build a CPA laser from a new, promising laser material called Cr-doped LiSAF. She contributed to papers on the design and performance of the Cr-doped LiSAF regenerative amplifier, extreme ultraviolet radiation (XUV) in laser-driven plasmas and a compact high-power femtosecond (quadrillionths of a second) laser.

"I have for 25 years told everyone that Donna taught me to align my first laser, and, in fact, she mentored me greatly during my first year in grad school," Ditmire said. "I always joked that she had a god-like talent to be able to lay her hands on a laser cavity and get it to lase. I learned an incredible amount from Donna, which launched me on my own career in high-intensity, short-pulse lasers, first at LLNL and then as a professor here at the University of Texas."

LLNL physicist John Crane, who worked with Strickland on the XUV paper, said she was already well known in her field because of her graduate work inventing CPA to build terawatt-scale lasers. "Several of Mike Perry’s graduate students and postdocs were female," Crane said, "and she served as a great mentor, as she was young and already very accomplished, upbeat and fun to be around."

One of those female graduate students was Kim Budil, now vice president for national laboratories at the University of California Office of the President. "I was over the moon when I saw that she was being honored for the truly transformative work she did with Gérard," Budil said. "I met Donna when I was a graduate student working in the short-pulse laser lab at LLNL. She was very smart and already extremely accomplished, and that alone made her a great role model.

"However, what I remember most was how good a colleague and friend she was. I was struggling in my Ph.D. research and having a hard time believing I could be an independent researcher. She reminded me to stop apologizing for being there — I belonged and was contributing in a real way. She showed me how to be a real scientist, confident in her knowledge and ability to contribute and ready to be a member of the team. She was fun — and funny — and loved the work."

In her comments after the prize was announced, Strickland reflected on Goeppert-Mayer’s career and said her award shows how far the scientific field has come since 1963 in terms of gender parity, even though women still make up only a quarter of attendees at major conferences. "It’s true that a woman hasn’t been given the Nobel Prize since then," she said, "but I think things are better for women than they have been. We should never lose the fact that we are moving forward. We are always marching forward."

Strickland, born in 1959 in Guelph, Canada, and Mourou, born in 1944 in Albertville, France, published the revolutionary article that would become the basis of Strickland's dissertation in 1985.

In a summary of the prizewinning work, the Nobel Committee for Physics said the inspiration for their invention "came from a popular science article that described radar and its long radio waves. However, transferring this idea to the shorter optical light waves was difficult, both in theory and in practice."

"The breakthrough was described in the article and was Donna Strickland’s first scientific publication," the committee said. "She had moved from Canada to the University of Rochester, where she became attracted to laser physics by the green and red beams that lit up the laboratory like a Christmas tree and, not least, by the visions of her supervisor, Gérard Mourou."

Using what the committee called "an ingenious approach," they succeeded in creating ultrashort high-peak-power laser pulses without exceeding the optical damage threshold and damaging the amplifying material. They stretched the laser pulses in time to reduce their peak power, a process called chirping, then amplified them, and finally recompressed them. The technique to reduce large amounts of anomalous dispersion was described by O.E. Martinez, J.P. Gordon, and R.L. Fork in 1984, but not recognized for its potential to stretch and unstretch pulses and reduce their peak power. If a pulse is compressed in time and becomes shorter, then more light is packed together in the same tiny space — the peak power of the pulse increases dramatically.

The chirped-pulse amplification technique makes it possible for a petawatt laser’s high-power pulses to pass through laser optics without damaging them. Before amplification, low-energy laser pulses are passed through diffraction gratings to stretch their duration by as much as 25,000 times. After amplification, the pulses are recompressed back to near their original duration. Because the pulses pass through laser optics when they are long, they cause no damage. 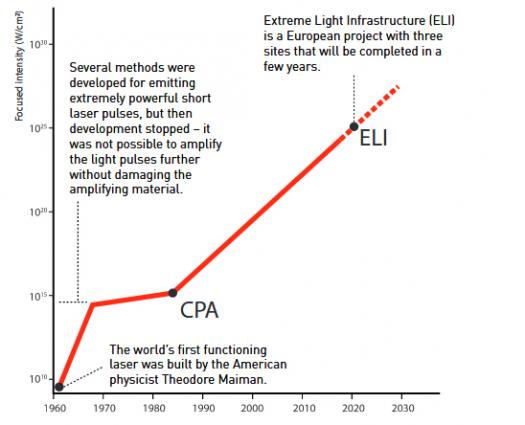 Strickland is continuing her research career in Canada, while Mourou, who has returned to France, initiated and led the early development of the European Extreme Light Infrastructure (ELI) project. The HAPLS advanced petawatt laser system, which was designed, developed and constructed by LLNL’s NIF and Photon Science Directorate, is a key element in the ELI project. The system recently was declared fully integrated and operational at the ELI Beamlines Research Center in Dolní Břežany, Czech Republic.

The CPA technique being rewarded this year is the foundation for the explosive development of increasingly strong laser pulses. "The invention of chirped pulse amplification realized by Donna and Gérard was truly a transformative change," said Constantin Haefner, LLNL program director for Advanced Photon Technologies. "The ability to amplify lasers to extreme powers enabled discovery of new physics, quickly followed by many industrial applications. The invention of CPA has not only inspired several generations of laser physicists and researchers but also has mobilized a multi-billion-dollar market of applications."