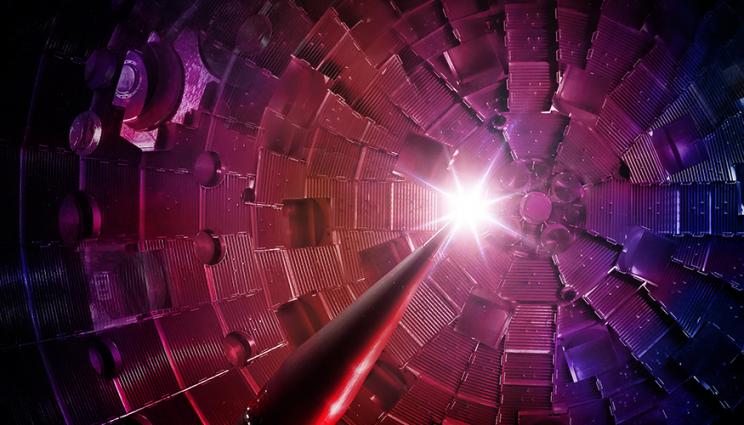 This rendering of the inside of NIF’s target chamber shows the target positioner moving into place. Pulses from NIF’s high-powered lasers race through the facility at the speed of light and arrive at the center of the target chamber within a few trillionths of a second of each other, aligned to the accuracy of the diameter of a human hair.

NIF is the world’s largest and most energetic laser, designed to perform experimental studies of fusion ignition and thermonuclear burn, the phenomenon that powers the sun, stars and modern nuclear weapons. As a key component of the National Nuclear Security Administration’s Stockpile Stewardship Program, experiments fielded on NIF enable researchers to gain fundamental understanding of extreme temperatures, pressures and densities -- knowledge that helps ensure the current and future nuclear stockpile is safe and reliable.

The record-breaking experiments utilized a diamond capsule -- a layer of ultra-thin high-density carbon containing the deuterium-tritium (DT) fusion fuel -- seated inside a depleted uranium hohlraum. This approach allowed the researchers to greatly improve their control over the symmetry of the X-rays that drive the capsule, producing "rounder" and more symmetric implosions.

"These results represent significant progress," said Sebastien Le Pape, lead author of the paper and lead experimenter for the campaign. "By controlling the uniformity of the implosion, we’ve improved the compression of the hot spot leading to unprecedented hot spot pressure and areal density."

In addition to increased yield, the experiments produced other critical results. For the first time, the hot spot pressure topped out at approximately 360 Gbar (360 billion atmospheres) -- exceeding the pressure at the center of the sun. Further, these record yields mean there was a record addition of energy to the hot spot due to fusion alpha particles. By depositing their energy rather than escaping, the alpha particles further heat the fuel, increasing the rate of fusion reactions and thus producing more alpha particles. This leads to yield amplification, which in these experiments was almost a factor of 3. As the implosions are further improved, this yield amplification could eventually lead to fusion ignition.

"Because of the extreme levels of compression that these implosions have achieved, we are now at the threshold of achieving a ‘burning plasma’ state, where alpha-particle deposition in the fusing plasma is the dominant source of heating in that plasma," said Omar Hurricane, chief scientist for the ICF Program.

"Each experiment we do unlocks important data that informs how we design and field future experiments," added NIF Director Mark Herrmann. "These results represent a significant advancement in our knowledge and will enable our next steps in tackling the difficult scientific challenge of ignition."

In addition, the experiments achieved conditions that now enable access to a range of nuclear and astrophysical regimes. The density, temperature and pressure of the hot spot are the closest to conditions in the sun, and the neutron density is now applicable for nucleosynthesis studies, which have traditionally needed an intense, laboratory-based neutron source. The conditions also are relevant for studying fundamental nuclear weapons physics.

Additional experiments have shown similar levels of performance, confirming the importance of this approach. Looking ahead, LLNL plans to advance its experiments by exploring increased capsule size, energy delivery on NIF and improvements to features such as the capsule fill tube.

"Every time we make progress, we can better understand what challenges lie ahead," said Laura Berzak Hopkins, lead designer for the experiments. "Now, we’re in an exciting place where we understand our system a lot better than before, and we’ve been able to take that understanding and translate it into increased performance. I’m very excited about the progress we’ve been able to make, and where we can go next."