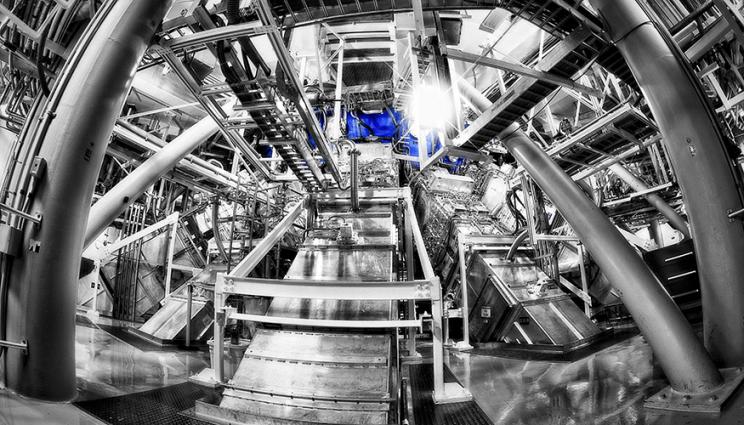 Target Area operators prepare the TanDM for a NIF shot. The 9,000-kilogram (20,000-pound) mechanism is about 8.5 meters long, with a boom that can extend about 6.75 meters. Photo by Jason Laurea/LLNL

National Ignition Facility's dual-purpose positioner is proving its worth

While multitasking may be easy for some people (and perhaps hard for others), it can be a particular challenge for the highly specialized equipment used to carry out experiments on the National Ignition Facility (NIF).

But TanDM, NIF’s new Target and Diagnostic Manipulator, is designed to do just that. To date, it is proving itself more than up to the job of performing as a target positioner for NIF shots. During the coming months, it also will be commissioned for positioning diagnostics.

Installed in June, TanDM is now a routine part of many NIF experiments (see "Dual-purpose Positioner Gets Its Baptism of Fire"). And in December, TanDM was successfully used for the first time to hold a target for an Advanced Radiographic Capability (ARC) shot. ARC is NIF’s petawatt-class laser system, designed to produce brighter, more penetrating, higher-energy X-rays than is possible with conventional radiographic techniques.

"ARC has tighter alignment or stability requirements than most NIF shots do," said NIF Alignment Operations Manager Shannon Ayers. "The question was whether TanDM was stable enough to hold an ARC shot target."

TanDM was designed to enhance NIF’s efficiency by allowing the CryoTarPos to remain dedicated to growing cryogenically cooled target layers, while the TanDM and the TarPos alternate in positioning targets for room-temperature and cryogenic target experiments. The instrument is able to transition from a diagnostic inserter into a target positioner in less than four hours. The design is expected to support diagnostic exchanges in less than one hour and snout exchanges in less than 20 minutes. TanDM is an important element in achieving the productivity goals established in the 2014 "120-Day Study" of NIF efficiency improvements, while increasing the rate of integrated experiments with cryogenic fuel layers.

Work on the TanDM concept began in November 2014. Requirements for its operation and the design were established in early 2015, and the instrument was commissioned for NIF shots in September 2016. A second TanDM, which will initially focus on diagnostic manipulation, is scheduled for installation in March of this year.

A major factor in TanDM’s success to date has been the work of software engineers Lyle Beaulac, Mikhail Fedorov, Rick Wilson and LLNL Summer Scholar Sara Woods, who were responsible for developing the controls software for the positioner. 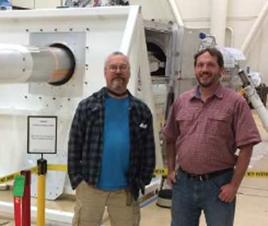 Collaboration between the NIF Computing (NIFC) Division software engineers and the TanDM engineering and commissioning team (Ayers, Terry Malsbury, Tom Kohut and Arlen Rowe) was crucial during all phases of the project. The NIFC engineers engaged early with the TanDM design team to provide advice on controls selection and to ensure the maximal reuse of existing hardware and software components, thus accelerating the delivery schedule and minimizing commissioning risk.

The NIFC team assisted in fine-tuning the assembled TanDM configuration in an offline facility to prepare for its operational qualification and deployment, reducing operational impact on NIF. After the positioner was installed in the NIF Target Bay, the team provided around-the-clock support during the online commissioning activities; many of these activities were performed off-hours to work around shot operations.

Also playing an important role in recent months was physicist David Martinez, who helped develop the stability tests and analysis that prepared TanDM for the ARC shots (see "Aligning the Target Positioners").

"In general, TanDM functions quite well and it’s almost seamless," Ayers said. "The shot operators like using TanDM as a target positioner because it’s well characterized and the alignments go faster, in their opinion, when they’re using TanDM."