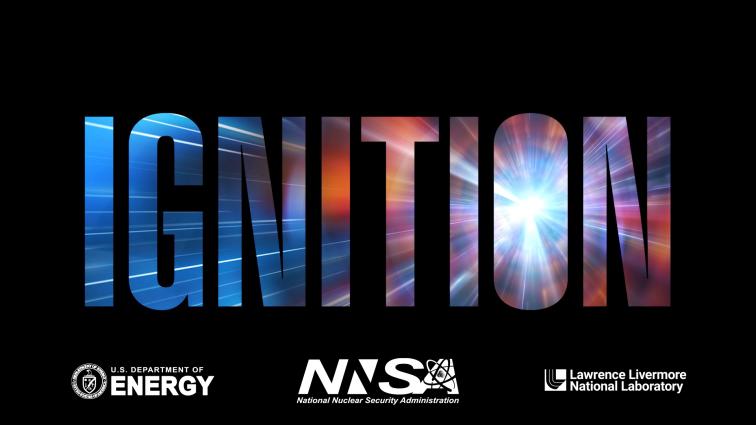 The U.S. Department of Energy (DOE) and DOE’s National Nuclear Security Administration (NNSA) today (Dec. 13) announced the achievement of fusion ignition at Lawrence Livermore National Laboratory (LLNL) — a major scientific breakthrough decades in the making that will pave the way for advancements in national defense and the future of clean power. On Dec. 5, a team at LLNL’s National Ignition Facility (NIF) conducted the first controlled fusion experiment in history to reach this milestone, also known as scientific energy breakeven, meaning it produced more energy from fusion than the laser energy used to drive it. This first-of-its-kind feat will provide unprecedented capability to support NNSA’s Stockpile Stewardship Program and will provide invaluable insights into the prospects of clean fusion energy, which would be a game-changer for efforts to achieve President Biden’s goal of a net-zero carbon economy.

“This is a landmark achievement for the researchers and staff at the National Ignition Facility who have dedicated their careers to seeing fusion ignition become a reality, and this milestone will undoubtedly spark even more discovery,” said U.S. Secretary of Energy Jennifer M. Granholm. “The Biden-Harris Administration is committed to supporting our world-class scientists — like the team at NIF — whose work will help us solve humanity’s most complex and pressing problems, like providing clean power to combat climate change and maintaining a nuclear deterrent without nuclear testing.”

“We have had a theoretical understanding of fusion for over a century, but the journey from knowing to doing can be long and arduous. Today’s milestone shows what we can do with perseverance,” said Dr. Arati Prabhakar, the President’s chief adviser for Science and Technology and director of the White House Office of Science and Technology Policy.

“Monday, December 5, 2022, was a historic day in science thanks to the incredible people at Livermore Lab and the National Ignition Facility. In making this breakthrough, they have opened a new chapter in NNSA’s Stockpile Stewardship Program,” NNSA Administrator Jill Hruby said. “I would like to thank the members of Congress who have supported the National Ignition Facility because their belief in the promise of visionary science has been critical for our mission. Our team from around the DOE national laboratories and our international partners have shown us the power of collaboration.”

“The pursuit of fusion ignition in the laboratory is one of the most significant scientific challenges ever tackled by humanity, and achieving it is a triumph of science, engineering, and most of all, people,” LLNL Director Dr. Kim Budil said. “Crossing this threshold is the vision that has driven 60 years of dedicated pursuit — a continual process of learning, building, expanding knowledge and capability, and then finding ways to overcome the new challenges that emerged. These are the problems that the U.S. national laboratories were created to solve.”

“This astonishing scientific advance puts us on the precipice of a future no longer reliant on fossil fuels but instead powered by new clean fusion energy,” U.S. Senate Majority Leader Charles Schumer (NY) said. “I commend Lawrence Livermore National Labs and its partners in our nation’s Inertial Confinement Fusion (ICF) program, including the University of Rochester’s Lab for Laser Energetics in New York, for achieving this breakthrough. Making this future clean energy world a reality will require our physicists, innovative workers and brightest minds at our DOE-funded institutions, including the Rochester Laser Lab, to double down on their cutting-edge work. That’s why I’m also proud to announce today that I’ve helped to secure the highest-ever authorization of over $624 million this year in the National Defense Authorization Act for the ICF program to build on this amazing breakthrough.”

“After more than a decade of scientific and technical innovation, I congratulate the team at Lawrence Livermore National Laboratory and the National Ignition Facility for their historic accomplishment,” said U.S. Senator Dianne Feinstein (CA). “This is an exciting step in fusion and everyone at Lawrence Livermore and NIF should be proud of this milestone achievement.”

“This is an historic, innovative achievement that builds on the contributions of generations of Livermore scientists. Today, our nation stands on their collective shoulders. We still have a long way to go, but this is a critical step and I commend the U.S. Department of Energy and all who contributed toward this promising breakthrough, which could help fuel a brighter clean energy future for the United States and humanity,” said U.S. Senator Jack Reed (RI), the chairman of the Senate Armed Services Committee.

“This monumental scientific breakthrough is a milestone for the future of clean energy,” said U.S. Senator Alex Padilla (CA). “While there is more work ahead to harness the potential of fusion energy, I am proud that California scientists continue to lead the way in developing clean energy technologies. I congratulate the scientists at Lawrence Livermore National Laboratory for their dedication to a clean energy future, and I am committed to ensuring they have all of the tools and funding they need to continue this important work.”

“This is a very big deal. We can celebrate another performance record by the National Ignition Facility. This latest achievement is particularly remarkable because NIF used a less spherically symmetrical target than in the August 2021 experiment,” said U.S. Representative Zoe Lofgren (CA-19). “This significant advancement showcases the future possibilities for the commercialization of fusion energy. Congress and the Administration need to fully fund and properly implement the fusion research provisions in the recent CHIPS and Science Act and likely more. During World War II, we crafted the Manhattan Project for a timely result. The challenges facing the world today are even greater than at that time. We must double down and accelerate the research to explore new pathways for the clean, limitless energy that fusion promises.”

“I am thrilled that NIF — the United States’ most cutting-edge nuclear research facility — has achieved fusion ignition, potentially providing for a new clean and sustainable energy source in the future. This breakthrough will ensure the safety and reliability of our nuclear stockpile, open new frontiers in science, and enable progress toward new ways to power our homes and offices in future decades,” said U.S. Representative Eric Swalwell (CA-15). “I commend the scientists and researchers for their hard work and dedication that led to this monumental scientific achievement, and I will continue to push for robust funding for NIF to support advancements in fusion research.”

LLNL’s experiment surpassed the fusion threshold by delivering 2.05 megajoules (MJ) of energy to the target, resulting in 3.15 MJ of fusion energy output, demonstrating for the first time a most fundamental science basis for inertial fusion energy (IFE). Many advanced science and technology developments are still needed to achieve simple, affordable IFE to power homes and businesses, and DOE is currently restarting a broad-based, coordinated IFE program in the United States. Combined with private-sector investment, there is a lot of momentum to drive rapid progress toward fusion commercialization.

Fusion is the process by which two light nuclei combine to form a single heavier nucleus, releasing a large amount of energy. In the 1960s, a group of pioneering scientists at LLNL hypothesized that lasers could be used to induce fusion in a laboratory setting. Led by physicist John Nuckolls, who later served as LLNL director from 1988 to 1994, this revolutionary idea became inertial confinement fusion, kicking off more than 60 years of research and development in lasers, optics, diagnostics, target fabrication, computer modeling and simulation and experimental design.

To pursue this concept, LLNL built a series of increasingly powerful laser systems, leading to the creation of NIF, the world’s largest and most energetic laser system. NIF — located at LLNL in Livermore, California — is the size of a sports stadium and uses powerful laser beams to create temperatures and pressures like those in the cores of stars and giant planets, and inside exploding nuclear weapons.

Achieving ignition was made possible by dedication from LLNL employees as well as countless collaborators at DOE’s Los Alamos National Laboratory, Sandia National Laboratories and Nevada National Security Site; General Atomics; academic institutions, including the University of Rochester’s Laboratory for Laser Energetics, the Massachusetts Institute of Technology, the University of California, Berkeley, and Princeton University; international partners, including the United Kingdom’s Atomic Weapons Establishment and the French Alternative Energies and Atomic Energy Commission; and stakeholders at DOE and NNSA and in Congress.