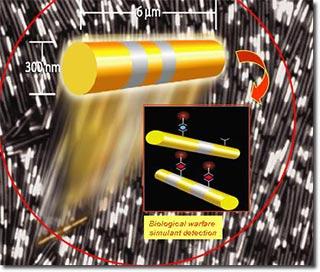 LIVERMORE, Calif. — Detecting biowarfare agents in the field will become a lot easier thanks to a new barcode system based on biosensing nanowires developed by Lawrence Livermore National Laboratory (LLNL) researchers.

The researchers, led by Jeffrey Tok of LLNL’s BioSecurity and Nanosciences Laboratory, built submicrometer layers of different metals including gold, silver and nickel that act as “barcodes” for detecting a variety of pathogens ranging from anthrax, smallpox and ricin to botulinum.

The team, led by LLNL and including researchers from Stanford University, the UC-Davis Center for Biophotonics and Nanoplex Technologies, used the multi-striped metallic nanowires in a suspended format to rapidly identify sensitive single and multiplex immunoassays that simulated biowarfare agents.

The researchers produced nanoscale wires by electrochemically depositing metals within the tiny cavities of porous mineral solids. They then layered the gold and silver in a specific way to produce nanowires with different characteristic stripe patterns depending on which pathogen they were trying to identify.

The reflection pattern and fluorescence from each stripe sequence can later be clearly recognized, similar to a barcode on a retail product.

“Antibodies of specific pathogens have been attached to the wires,” said Jeffrey Tok, principal author from LLNL. “This produces a small, reliable, sensitive detection system that can easily be taken into the field.”

The system not only applies to biowarfare agents, but could also be used during an outbreak of an infectious disease.

The research appears online in the journal Angewandte Chemie.